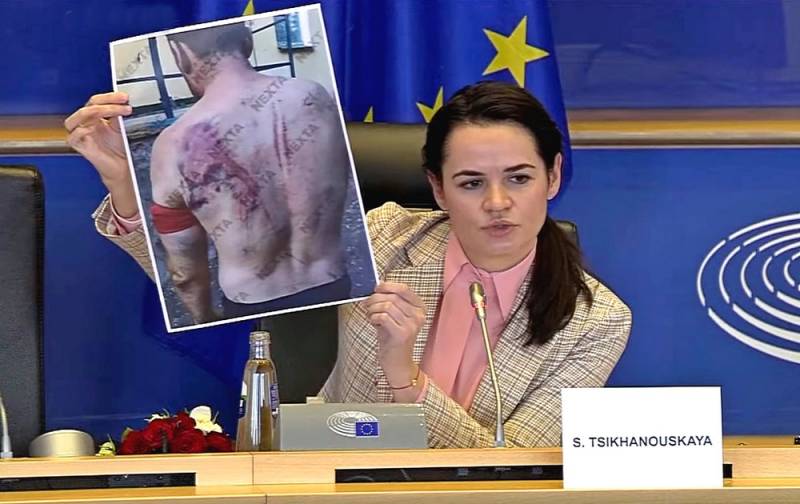 Today, when the "modest housewife", who has become the heroine of all, without exception, world News, with a resolute air declares that Alexander Lukashenko is an "illegitimate president" and she is "the only leader elected by the Belarusian people", it is high time to ask, finally, the question: who is she? What is really her meteoric rise political a career secured by the absurdly tragic fate of your own spouse? Coincidence? "The spirit of time", which raised to the very top a random person, but found himself "at the right time and in the right place"? Completeness! How much can one believe the obvious lie and absurdity, taking at face value a clearly false image, from under the doll's mask the notorious white threads are more and more clearly visible ...


Everything written below is by no means a statement. This is only a version based on certain facts. If someone can find the questions that arise regarding the Tikhanovskys, other answers - please. However, today there are too many points in need of clarification to believe in the blissful tales of the "blogger-truth-seeker" and the "cutlet president".

From "housewives to leaders of the revolution"? It doesn't work that way!

The phrase that allegedly "every cook can run the state", often attributed to Vladimir Ilyich Lenin, is one of the classic examples of 100% fictional "historical quotes". In fact, the leader of the world proletariat in one of his works stated exactly the opposite: "We know that any laborer and any cook are not able to immediately take over the government." And he was, of course, absolutely right. In a promotional video filmed about Tikhanovskaya by The New York Times, she earnestly declares: “I was a housewife. Now I am leading the revolution ... "Oh, Svetlana ?! Such a housewife, who has not seen anything in her life except her husband, children, a cozy family hearth and meatballs fried on it? So, there are no moments in your life that you keep silent about in the most careful way? Yes, still as it is, and I will tell about them. And I'll start, perhaps, with how the life path of the current "president" generally began.

Someone may say that the study of issues that have, rather, a moral and ethical property, in this case is not entirely appropriate, but I disagree with this. After all, we are talking about a person who is not just claiming to be the leader of the state, but who arbitrarily appropriated the status of “the conscience of the nation” and the main champion of justice in the country. Why not talk about personal and delicate things? The fact is that Sveta Tikhanovskaya has always been a classic embodiment of the type with the grip of a provincial woman trying at any cost to "break through" and get everything from life that she thought was due to her. At the same time, if possible, not particularly straining. She graduated from school with a Gold medal, but entered the Mozyr Pedagogical University, which is not considered an elite university in Belarus - this is very putting it mildly. Future specialty - teacher of German and English.

By her own admission, the dull school strap of Sveta did not drag out a single day. And why? Already on the 4th year of university, she very successfully went to the local nightclub - "55 club". So successful that it soon became the legal wife of its owner, Sergei. After some time, the club ceases to work (according to the recollections of the townspeople, this institution, if it was a breeding ground for anything, it was not culture, and many, having learned about its closure, breathed a sigh of relief), and the young couple moved to Gomel. There, Sergei makes a new attempt to engage in the club business, but this time things do not go well initially, and in 2013 the Tikhanovskys set off to “conquer the capital”. Then everything goes more than successfully - the company "Compass Production" appears and Tikhanovsky goes headlong into the waves of the difficult craft of an advertiser. With this company, however, not everything is so simple either. Initially, in addition to Sergei, its co-owner was businessman Pavel Puntus. However, they simply "survived" him from the case, and now Puntus reacts extremely nervously to any attempts to talk to him about Tikhanovsky.

By the way, Svetlana got his share in the business. The overwhelming majority of the former employees of "Compass" also remember this period of their lives with extreme reluctance. The company, they said, was more likely under the control of Svetlana than Sergei. He is remembered as a lover of "very peculiar management" (to put it simply, a tyrant and a boor), as well as an extremely greedy person who kept his own staff literally "in a black body." This is confirmed by the fact that even having representative offices in Russia, Belarus and Ukraine, having “untwisted” the business to a very solid level, Tikhanovsky continued to offer wedding photography services. But only "very expensive". Commercials for Sberbank, Maxwell, IKEA, Ksenia Sobchak and Dmitry Nagiyev - and wedding hacks? Somehow it doesn't fit very well. Although ... There may be another explanation.

There is a period in the life of Svetlana Tikhanovskaya, which in her own numerous interviews she is silent. A real "blank spot". Rather - foggy, because it is associated with a country romantically called Foggy Albion. Telling that she “worked as a secretary, then as a translator, here and there ...” Mrs. “President” will never say a word about her work in such a non-governmental charitable organization as Chernobyl Life Line. An extremely interesting structure! At least by the fact that even in Belarus it operates for some reason under two names - the above, as well as the Chernobyl Children's Project. The stated goals are the most noble ones: the main activity is the improvement of children. There is evidence that about 60 thousand children have actually improved their health through this organization. True, in addition she is also engaged in "a number of other projects, both short-term and long-term." Which ones? Question… The address of this organization is Hartley Business Park, 6 Selborne Rd, Alton GU34 3HD, UK. It was there, in the British headquarters of Chernobyl Life Line, that Tikhanovskaya, as one of her biographies says, "was on a long business trip." How long is it? And whether in the same organization or some other?

It is clear that all these are secrets covered with deep darkness. However, there is every reason to believe that Svetlana returned from Britain as a completely different person. Generally speaking, the life path of the Tikhanovskys is somehow very clearly divided into stages, at each of which they seem to be substituted - they begin to act in an absolutely unusual way. Not interested in anything, except for club parties, Sergei suddenly makes incredible success in the advertising field, instantly acquiring connections and acquaintances "at the very top". By the way, many of these ties (the same Sobchak or Alexei Navalny, with whom Compass of the Tikhanovskys had offices in Moscow) again have long-standing, strong and not too transparent ties with Britain. It seems that they are very actively helping him, "moving" in the right direction.

Tikhanovsky's company opens offices in Minsk, Moscow and already "post-Maidan" Kiev, and he constantly runs between these points. Just for the sake of business? However, a completely peaceful and loyal to the authorities businessman and creative artist Sergey exists only until March 11, 2019, until the launch of the Country for Life YouTube channel. Again, for about a year this Internet site did not stand out in any way - little by little they scolded the authorities there, mostly telling stories of small provincial businessmen and sharing "secrets of success." And suddenly, on the eve of the presidential elections, "Strana" explodes with a flurry of criticism of Alexander Lukashenko and calls for "reformatting" the country's political system. Typically, Tikhanovsky seems to be moving away from business. Where does the money come from for "promotion", a lot of trips and so on? According to his version, they are collected on the Ulej platform. However, it is impossible to get rid of the feeling that Tikhanovsky is being led by generous funding and very specific pointing out exactly what and when to do it.

Think about it - a fairly prosperous and previously completely apolitical businessman, suddenly throwing himself into the pre-election "meat grinder" for no reason is nonsense. In Belarus - nonsense squared! A fairly wealthy (and by Belarusian standards - a very well-to-do) person, as they say, "rushing on the rampage", breaking his own comfortable life. For what? Talk that Tikhanovsky was pushed into confrontation with the authorities by the refusal of some local officials to allow him to buy an old mansion of historical value for his personal estate cannot be taken seriously. This, excuse me, is nonsense, and not a motive for a "riot" that brought the would-be blogger to a prison cell, where he will most likely have to spend a rather long time. Rather, his actions are reminiscent of the convulsive movements of a puppet who is mercilessly pulled by the strings. Who!

Why not your own spouse? You say "nonsense", and I will answer with a real example. I think it is quite appropriate - since we are talking about candidates for the presidency. The rather mediocre banker Viktor Yushchenko suddenly acquires enormous ambitions and messianic inclinations after being brought to him in the USA by Catherine-Claire Chumachenko, the future “first lady” of Ukraine, a great specialist in the “Holodomor” and, by the way, a well-known “benefactor”. The president from Yushchenko turns out to be very bad, but he manages to arrange the first "Maidan" and begin the process of "turning" the country away from Russia, to the West. Why not assume that Svetlana Tikhanovskaya returned from Great Britain, having very specific relations with the local special services, most likely with the MI-6, which is engaged in external operations? Within the framework of this version, all further events fit into a very coherent chain: Sergei is "prompted" for a new type of business and the regime of maximum favored nation is created - let him grow overgrown with connections and carry out small orders (quite possibly, in general "in the dark").

Then the time comes and the “sleeping” Tikhanovsky is “activated”, turning him into a “revolutionary blogger”. However, he does not even suspect that in the planned combination he is just a bait, a “sacred sacrifice,” thanks to which the real figure, Svetlana, is being promoted to the goal. “The wife of a prisoner of conscience” is so romantic, attractive, and most importantly, fits into all Western classical “canons”. In favor of this assumption, it also works that the main subversive activities against Belarus (and support for Tikhanovskaya) are carried out from the territory of Poland and Lithuania. These are countries where British gentlemen from offices without signs feel at home and can give absolutely any orders, in no doubt that they will be carried out. The fact that right now the anti-Russian activity in London has increased significantly is beyond doubt.

Do you still doubt that the large-scale, well-coordinated and well-financed actions of the Tikhanov opposition, simply cannot be "spontaneous"? Then look into her eyes - at any photo, in any video. It is the eyes of this woman, pretending to be a “simple housewife, wife and mother”, that categorically do not fit with her “simple” appearance, “sincere” smiles and so on. From time to time, the true essence peeps through the mask, and then it becomes obvious - Tikhanovskaya has a cold, angry and gaze of a person looking at the world through the slit of the sight.
Reporterin Yandex News
Reporterin Yandex Zen
19 comments
Information
Dear reader, to leave comments on the publication, you must sign in.