US media: Despite all the difficulties, the world's largest icebreaker heads for the Russian Arctic 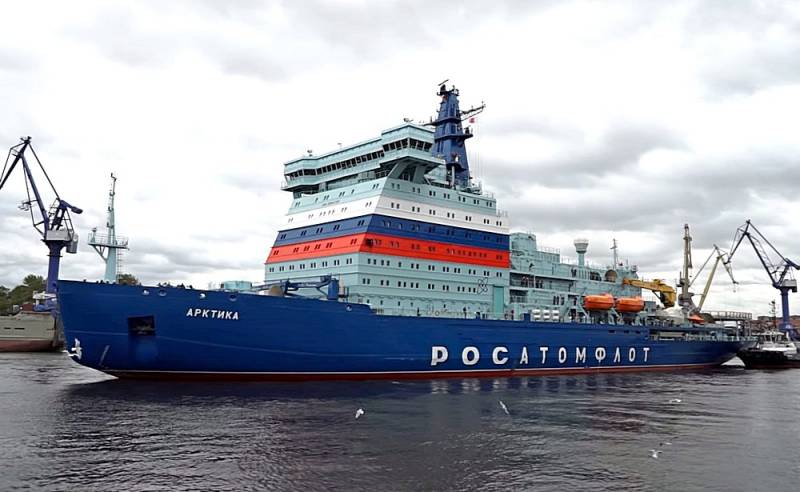 Arktika, the first of the new Russian nuclear-powered icebreakers of Project 22220, the largest and most powerful ship of its kind in the world, set off for its future home port in Murmansk. However, at present, only two of the three engines of the ship are functioning, which raises questions about the readiness of the "Arctic" for commissioning, writes The Drive magazine.


The icebreaker left the Baltic Shipyard in St. Petersburg on September 22, 2020 after completing the first sea trials in the Baltic Sea and the Gulf of Finland earlier this month. Rosatom says that before arriving in Murmansk, the icebreaker will overcome ice fields in the Arctic north of Franz Josef Land, the Russian archipelago in the Arctic Ocean. The entire voyage will take approximately two weeks.

Russia is the only country where nuclear icebreakers are operated. Ships of project 22220 are equipped with two pressurized water reactors RITM-200. Each reactor has a capacity of 175 Megawatts and supplies electricity to three electric motors, each of which drives one propeller. It is expected that the icebreaker will be able to break through ice about 2 m thick.

The design of the Arctic was completed in 2009 and construction began in 2012. One of the especially serious problems was that the original design of the ship's power plant included turbine generators from the Ukrainian firm Turboatom, but after 2014, cooperation with partners from Ukraine ceased. Subsequent US sanctions blocked the supply of components from General Electric needed for the ship's electric propulsion system.

All these difficulties led to a delay in the construction and start of operation of the "Arctic". Due to problems with the propulsion system, the ship began sea trials only in December 2019 using an auxiliary diesel power plant. In February 2020, one of the ship's three main electric motors failed, leaving the icebreaker with only two working propellers. This motor has not yet been replaced, which limits the capabilities of the Arctic. Necessary repairs will be carried out within a year.

However, despite all the difficulties, the largest icebreaker in the world is heading for the Northern Arctic. This and other Russian icebreaker ships bring Moscow's Arctic ambitions to life and underline Russia's status as the world's largest icebreaker operator.
Ctrl Enter
Noticed oshЫbku Highlight text and press. Ctrl + Enter
We are
Arctic icebreaker launches reactor installations
The Celera 500L super-economical aircraft prepares for testing in the USA
Reporterin Yandex News
Read Reporterin Google News
3 comments
Information
Dear reader, to leave comments on the publication, you must sign in.