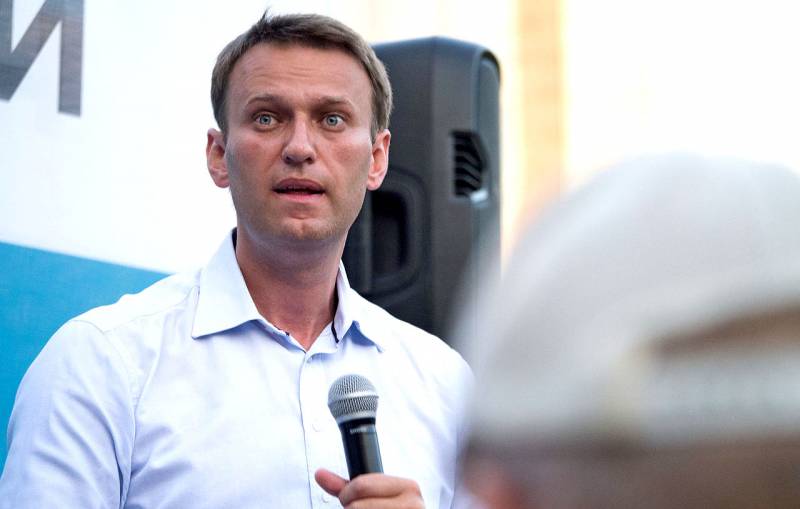 Another anti-Russian provocation, despite the colossal forces and means applied for its organization, ends, from a legal point of view, in nothing. Someone grossly miscalculated, choosing to the role of the main accusers and accusers of our country in this dirty business not over-cynical Englishmen, but pedantic and law-abiding Germans.


They are unable to dress a pile of insane assumptions, extremely dubious "evidence" and obviously rigged "evidence" in some kind of official investigation, based on the results of which Moscow could try to present new ultimatums. The rules do not allow, and stubborn Teutons categorically do not want to violate them even "in the name of higher interests". However, this does not mean the end of the story. Rather, on the contrary ...

No investigation into the case of the "poisoning of a prominent oppositionist" German law enforcement agencies can not only carry out, but even begin. The Süddeutsche Zeitung told compatriots about this discouraging circumstance with reference to serious sources in the relevant circles. How so? And like this! Herr Navalny, it turns out, is a Russian citizen (or you didn’t know before!), His "poisoning" did not happen on German soil ... And then the General Prosecutor's Office of the country, to which, according to German journalists, representatives of the local government rushed with " declared "almost before the landing gear of the plane with the" extremely important patient "from Omsk touched the German soil? There they just threw up their hands: “There was a problem with the Russian in Russia. What connection can we have before that ?! " Now, if the poor fellow had taken, and died within the walls of the Charite, then, perhaps, there would have been a reason to excite and investigate something there. In the meantime, there is not the slightest legal basis.

Only Frau Merkel turned out to be aroused, who, it seems, was used in this situation as a naive girl, which for her experience policy, you see, it's just indecent. German lawyers, unlike their compatriot politicians, did not want to take part in a completely obvious booth, which definitely does them credit. Moreover, as far as is known, to the employees of the local prosecutor's office, who nevertheless visited him after the "miraculous recovery" in the hospital, Navalny directly stated his complete absence from participating in any investigative actions regarding his precious person. Now he may have been given the command to "change his mind", but what has been said cannot be reversed.

What will be next? But just a booth and will be. Production, farce, show, from time to time turning into a natural circus with horses. A number of facts do not allow to doubt this even for a moment. Well, at least the statement made not so long ago by the head of the German parliamentary committee on foreign policy, Norbert Röttgen. This respected parliamentarian, with the most serious air, deigned to broadcast that the under-poisoned Navalny "must be protected from attempts by the Russian investigative bodies to hold a conversation with him." Why not? But because "Russia in this case does not demonstrate its intentions to conduct a serious criminal investigation." Herr Röttgen proclaims that today "protecting and caring for the health of the opposition are top priorities." On this basis, he proposes to consider the Russian request for legal assistance "problematic". That is, to simply ignore it, as Germany is doing to this day. Ultimately, the German politician calls for "a broad international investigation into the poisoning within the UN or the Council of Europe." That is, translating this declaration into human language - instead of involving professional investigators and experts, gather a company of bouncers and give them the opportunity to broadcast their own delusional versions in the "high-like" style, developed from the "correct" political positions, to the whole world.

This, in his opinion, should be the "objective investigation" ... If this is not natural clownery - then I don't know what to consider as such. From all that is happening now, an unambiguous conclusion can be drawn: the forces that launched the special operation "poisoning Navalny" in no way intend to allow even a chance that the truth about it will emerge and their plans will be revealed. But they are definitely going to finish the game they started.

All new facets of absurdity

This is evidenced, in particular, by the absolutely enchanting "throw-in" made recently through the publication Business Insider, which has obviously lost the last drops of self-respect. Believe it or not, the editorial staff there managed to get absolutely stunning information from "the most reliable sources in NATO intelligence": if Navalny even steps on Russian soil, the malicious Putin will certainly poison him again! This time it will probably be to death ... No, just imagine this picture: the fearless "NATO scouts" rush to meet the sharks of the BI pen to tell the world about a new terrible danger hanging over the "beacon of Russian democracy." Surely they make their way through the back streets, raising their collars according to the laws of the genre and hiding shameless eyes under dark glasses ...

However, the absolutely schizoid nature of the statements of these very "sources", diligently voiced by a seemingly respectable publication, suggests that these are not "knights of the cloak and dagger", but the most natural crooks. So, one of them is taken to assert: "The order to murder Navalny was agreed at the highest level and it is unlikely that this was done without the knowledge of the president ..." The other two agree that the "sun of opposition" will come a karachun as soon as the construction of Nord Stream is completed -2 "and" the head of the Kremlin will decide that the greedy and weak West will no longer be able to punish him. " Well, of course, this will happen if Navalny does not calm down and "continues to investigate corruption in Putin's inner circle." The third source, which, according to Business Insider, is not just anyone, but a "military intelligence officer from NATO headquarters in Brussels," is the most categorical: Navalny is definitely a khan! You see, he does not know whether "Navalny will be killed in Russia right away or will they wait for the right time." However, he expresses confidence that the president of our country "considers the West incapable of standing up for some dissidents."

As a matter of fact, the true background of this concoction, which looks clumsy and primitive even for modern Western propagandists, is visible a mile away: Navalny must not be allowed to go to Russia, Nord Stream-2 must never be completed, and the Kremlin must be "roughly punished." Otherwise, they will poison someone else ... I understand that, perhaps, I too often use in my narration various definitions related to pop and circus themes, but it is simply impossible to find other words to describe a completely buffoonish action that unfolded around the next "poisoning of the century" ... What is the mere foolishness of Vil Mirzayanov, who turned his own sagas and tales about the "Novichok" into a reliable and stable source of income. This renegade on the air of "Dozhd" embarked on a hypocritical "repentance" and brought Navalny "the deepest apologies for participating in the development of the substance with which he was poisoned." Unless he sprinkled ashes on his head and ate the earth ...

About the attempt to nominate the "poisoned" for the Nobel Peace Prize, which was recently announced on his Facebook page by a professor at Rutgers University in the US state of New Jersey, Sergei Erofeev, there are simply no words. This brilliant idea immediately dawned on a number of professors from recognized universities who are engaged in Russia, and now, most likely, "will be supported by international organizations and government officials." Here I do not even presume to comment - there are no censorship expressions, at least cut it ... I will limit myself to stating the fact that Navalny would most likely have to fight for the Nobel Prize in this nomination with Donald Trump and the couple of “presidents of Belarus” Tikhanovskys. Decent company, right to speak. All of them would be ... Nominated.

Be that as it may, but this orgy pursues purely pragmatic goals - to bring "public opinion" to the concrete steps that the West intends to take, using a completely far-fetched and provocative reason with "poisoning". The European Commission is now not discussing the validity and plausibility of the accusations against Russia, but a lively discussion of how to call the new sanctions package against our country “Navalny's act” (by analogy with the American “Magnitsky act”) or it’s not worth it. , since the "victim" is still breathing? So far ... The British Minister in charge of Foreign and Commonwealth Affairs, Dominic Raab, at a meeting with US Department of State Michael Pompeo, bluntly admitted that he “could not see a reasonable explanation for the poisoning of the oppositionist”, alternative to the fact that “it was an operation by the Russian special services.” Can't or doesn't want to? However, it doesn't matter. Mr. Pompeo himself, who had previously stated about the existence of "a high probability that the assassination attempt on Navalny was ordered by high-ranking officials in Moscow," expressed himself more specifically the day before. According to him, "the American authorities are ready to respond to the poisoning of the Russian oppositionist in a proportionate way." Naturally, as proportionate as they themselves think. That's for the sake of this and all the mess. Why investigate something if you can continue to blatantly lie further, basing all new anti-Russian demarches on this lie? However, here, as they say, options are possible ...

It seems that this does not reach only Navalny himself, who revels in the attention and fame that has fallen on him. Do you know what this organism is most worried about at the moment? About the return of his clothes taken off in a Russian hospital where he was rescued. The "victim of the poisoners" calls his things "a very important material evidence", but the point is probably something else - the clothes, I suppose, are not from "secondhand" and are worth a lot of money. Given the reservation of German prosecutors that his death in Germany could give rise to an official investigation, and the gloomy predictions of "NATO scouts", the "oppositionist" should definitely not worry about his own brand rags.
Ctrl Enter
Noticed oshЫbku Highlight text and press. Ctrl + Enter
We are
Ukraine from the inside: traitors, curators and those who watch from the Kremlin
Ten "defeats" of Putin
Reporterin Yandex News
Read Reporterin Google News
17 comments
Information
Dear reader, to leave comments on the publication, you must sign in.