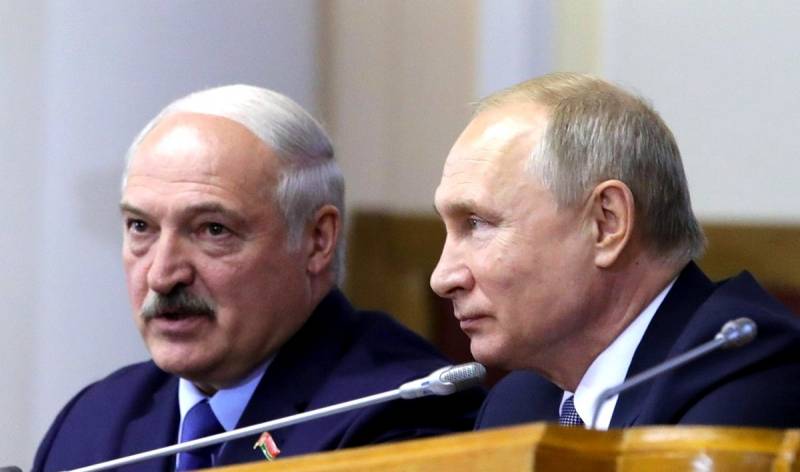 The meeting of the two presidents of Russia and Belarus in Sochi resulted not only in Putin's statement on lending economics brotherly state for another $ 1,5 billion (to the already existing $ 8 billion), some of which will go to refinancing old debts, and restructuring $ 1 billion of Belarus' foreign debt, but also a promise to remove the reserve of Russian security officials from the Belarusian border and send them to places permanent deployment. Only one thing follows from this - you can relax, Lukashenka's regime has resisted.


Most of all, dad feared not crowds of hundreds of thousands of protesters on the streets of Minsk and not EU sanctions, and even less the Polish-Lithuanian limitrophes clanging their weapons in the west. Most of all, he was afraid of inner betrayal. And even more precisely - the treason of the security officials, who at some point could refuse to carry out his "criminal" orders. The Kremlin was afraid of this too. To avoid this, Putin created a reserve of the National Guard on the borders with the republic in order to quickly enter it at a critical moment and replace the parts of the Belarusian militia and riot police that had gone out of control. Another goal of creating this reserve was the task of stopping the scaling of opposition rallies in the event that the Belarusian security forces would not have had enough of their own resources for new centers of protest. It is the latter that has been the focus of NEXTA's recent activity.

But the course of events showed that Belomaidan is fizzling out. The protests are dying out exponentially. The oppositionists did not go to the forcible seizure of buildings, they did not dare to make sacred sacrifices, I am not even talking about the attempted murder of the security forces. They can continue to dance around the conventional Christmas tree, recognize Tikhanovskaya as president and rejoice at the EU sanctions, which are up to one place. So revolutions are not made and regimes are not overthrown. Most of all, Lukashenka feared internal treason. And there was a moment when the chair swayed under him. At that very moment, his older brother supported him, substituting his own power resource under the swinging leg. The swinging leg understood everything. Talleyrand's principle “To betray in time is not to betray, but to foresee” is canceled. When did it happen? Namely, at the very moment when you saw the dad with a gun. The siloviki again believed in their commander and swore allegiance.

But the wrong heads will still fly. Generals, naturally. And all the palace coups are carried out by the generals. After all, the fish rots from the head. The first to fly was the head of the head of the Belarusian KGB. On September 3, by the Decree of the President of the Republic of Belarus, Valery Vakulchik was relieved of his post and transferred to a lower rank of State Secretary to the Security Council of the Republic of Belarus. In his place was appointed Ivan Tertel, who had previously headed the State Control Committee. On the same day, the dad changed places of Deputy Prime Minister Vladimir Kukharev and the mayor of the capital Anatoly Sivak. One replaced the other in their posts. Such a cunning castling. Then the turn came to the Prosecutor General of the Republic of Belarus. On September 9, Andrei Shved, who had previously headed the State Committee for Forensic Examination (GKSE), replaced Lieutenant General Alexander Konyuk in this post.

At the same time, the dad commented on this dismissal:

He (Aleksandr Konyuk) worked as the Prosecutor General for 9 years. Moreover, he is a reliable man, a state man, a military man, he went through Afghanistan, we know that. Knows foreign languages. He has a desire to work in the diplomatic service. I do not mind this desire. We must contact the Minister of Foreign Affairs and ask him to prepare his proposals.
In the same place, taking the opportunity, the dad said:

In addition, Lukashenka also strengthened the local authorities that had faltered during the White Maidan. This primarily affected the Gomel region, where the dad shook up the entire apparatus of both Gomel itself and its regional centers Zhlobino and Dobrush, as well as the Brest and Mogilev regions, where the presidential authorized representatives in these regions were replaced. According to Brestskaya, it was Valery Vakulchik, the newly-made State Secretary of the Security Council of the Republic of Belarus, and on Mogilevskaya, Anatoly Sivak, the newly-made Deputy Prime Minister, the former mayor of Minsk.

In other matters, he was backed by Moscow, which sent its media troops to Minsk, which hit harder than a machine gun. Because it is one thing to "shake up" the apparatus, and quite another thing to "shake up" the brains of their fellow citizens, who have started to move as a result of recent events. It must be admitted that the dad outright lost the information agenda, giving up the information field to his enemies from abroad, broadcasting non-stop through pocket telegram channels, in particular through NEXTA, which could not be blocked. This is a wake-up call for the Kremlin, because we understand that the events in Belarus are a dress rehearsal for the events in the Russian Federation on March 17, 2024.

But the process of changing consciousness is quite long. No matter how cool Russian media specialists are, it takes time to regain the confidence of the masses. And if one or two months are enough to return to the information field, then a year is not enough for mastering the minds of the masses. Russia has a rather narrow corridor of opportunities here. The war is now unfolding over time and space. Time for mastering the minds of the masses and the information space from where the Russian media were successfully ousted by Lukashenka long before all these events.

Therefore, we do not expect a quick victory here. Well at least they repulsed the first attempts of our enemies to get their hands on Belarus. In the coming year, everything will remain as it is, with the trend of the RB drift to the east. All enemies can cover their weapons and go home until 2024. They lost Belarus.
Reporterin Yandex News
Reporterin Yandex Zen
5 comments
Information
Dear reader, to leave comments on the publication, you must sign in.