Russia sent an Iskander strike in Syria to Ankara 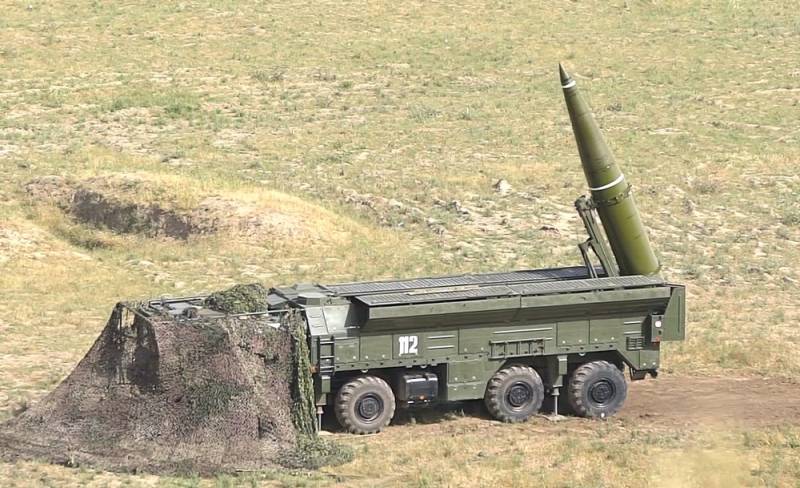 The situation in Syria began to heat up again. It is reported that the Russian aviation struck a powerful blow on the base of the terrorist group Hayat Tahrir al-Sham, where instructors of a certain foreign PMC trained its militants. This is the most serious exacerbation since the beginning of spring. This event is of the greatest interest because the Russian Iskander-M OTRK also participated in the attack.


This operational-tactical missile system is designed to destroy enemy targets (air defense and missile defense systems) at a distance of up to 500 kilometers. That is, the main area of ​​its application is striking a systemic enemy, which motley militants and foreign mercenaries are frankly not pulling at. What did the Russian Defense Ministry want to say in this way?

For the first time, rumors about the transfer of Iskander-M to Syria appeared in 2016. In March 2016, during the filming of the Zvezda TV channel at the Khmeimim airbase, a certain technique with a very characteristic silhouette, similar to the Iskander-M OTRK. Literally immediately after this information leak, reports appeared in the foreign press that the Turkish command had given an order to withdraw its command posts and communication centers outside the range of the Russian missile system.

In the same year, a number of publications, as well as the Syrian military сообщили on the use of Iskander against field fortifications and convoys of terrorist groups. The RF Ministry of Defense did not officially confirm this information. Later, on the territory of the Khmeimim airbase, attentive observers noticed at least two Iskander-M complexes covered with a camouflage net. It has been suggested that the total number in Syria could be as high as four. Two years later, in 2018, the actual use of missile systems was confirmed by the Deputy Prime Minister of the Russian Federation for the defense industry complex Yuri Borisov:

Operation in combat conditions has confirmed the high characteristics of Russian weapons and their traditional advantages - ease of use and reliability in use.
According to the official, "Tornado-G" and "Smerch" also passed baptism of fire. The shortcomings revealed in the course of field tests were directed to eliminate. The question remains, why was the Iskander used again?

Apparently, Moscow and Damascus have decided to step up work to squeeze the Turkish military presence out of northern Syria. Recall that half of the province of Idlib, as well as part of Aleppo, is actually under the rule of the invaders. At the same time, several Turkish observation posts after the spring offensive of the Syrian government army found themselves in its deep rear. The real benefit to Ankara from them is zero, moreover, the surrounded warriors are completely dependent on the goodwill of the Russian military for supplies. The withdrawal of the Turks from these observation posts should clearly be the first step towards normalizing the situation in Idlib.

In general, the situation today is not in favor of Ankara. Active expansionist policy President Erdogan has created a number of serious problems for Turkey itself in Libya and the Eastern Mediterranean, where a broad international coalition has formed against it. Like us told on the eve, the geopolitical situation is conducive to starting to squeeze the Turks out of northern Idlib, since Ankara will not pull war on several fronts. Currently, Russian and Turkish diplomats are actively negotiating the future fate of Syria and Libya.

It is quite possible that the combat use of the Iskander-M OTRK should have become a kind of hint to the "Sultan", since hitting terrorists with him is like hitting sparrows with a cannon.
Reporterin Yandex News
Reporterin Yandex Zen
11 comments
Information
Dear reader, to leave comments on the publication, you must sign in.