15 2018 June
10
The new Lunar Orbital Platform-Gateway orbital station is the only real alternative to the ISS. And although the program is at an early stage of development, the United States and Russia have already managed to quarrel "in half." 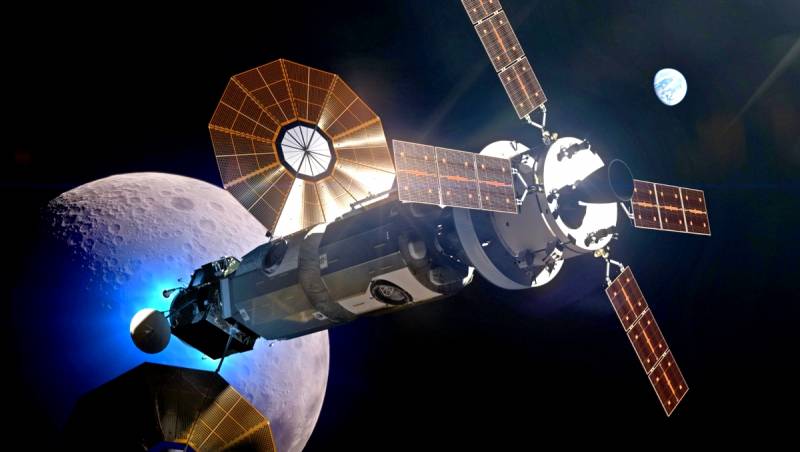 A future without a station

Now the International Space Station can be considered the main pride of earthlings. An amazing example of engineering genius and no less amazing coordinated work of the most different countries of the world. Here are represented and Russia, and the USA, and Japan, and Germany. And many other states. At the same time, the ISS is the most critical space project in history. The reason is simple: it is also the most expensive. Experts estimate that program participants spent over $ 100 billion on the station. This is despite the fact that the lion's share of the experiments carried out there could be carried out under specially simulated conditions on Earth.

One way or another, the United States intends to abandon the station in the mid-2020s. In any case, at the state level. Recently, the new director of NASA James Brydenstein hinted at some "interested private traders." But, frankly, it is hard to believe that private companies rush to the ISS with difficulty. They simply have nothing to do there. Some projects are possible, but it is still expensive, long and technically difficult.

Under these conditions, Russia is considering a “national orbital station” created on the basis of future ISS modules. The same block “Science”, which they wanted to put into orbit back in 2007, was never launched (and it is not known whether they will ever be launched).

In general, the situation is extremely clear. Russia, Europe and the United States run the risk of losing their orbital station. China, meanwhile, is full of strength and determination to build its first multimodular orbital station - a kind of analogue of the Soviet "World".

The alignment of forces in which the Chinese will have a station, but the United States does not, is clearly not happy with the Americans. And then Donald Trump signed the “Directive No. 2017” in December 1, which implies the return of the United States to the moon. It sounds beautiful at first glance, but de facto it means that the American leadership has abandoned Martian ambitions.

But for the Americans, the cards came together in a different vein. And the proposal to build a new station in the orbit of the moon came in handy. First, the new NASA program was called Deep Space Gateway, and then renamed the less “romantic” Lunar Orbital Platform-Gateway or LOP-G. In short, it will be a greatly reduced analogue of the ISS, on which four people can work during the expedition for up to 90 days. Presumably there will be four modules: electric, residential, supply module and airlock. Against the backdrop of the huge ISS, it’s not a lot, frankly speaking. But then it’s not near us, but near the moon. At the same time close and far.

The main question: why is such a station needed at all? As the first name (Deep Space Gateway) implies, the station is a “gate to deep space." In simple terms, they want to use it not only to return US astronauts to the moon, but also for flights to Mars. And maybe even further. Looking at the uncertainties of NASA in terms of its strategy, it is hard to believe in “long journeys”. But this is not about that.

The ISS began to build when relations between the USA and the Russian Federation were, on the whole, normal, although without any particular sympathy for each other. In this sense, the new station was not immediately lucky, because now experts are seriously discussing a new Cold War and an increasing arms race.

Nevertheless, in 2017, Russia and the United States agreed to create a near-moon station, or rather, they signed a declaration of intent. The program was scheduled to start active in 2019: it is impossible to state other specific dates with confidence at the moment. By the way, then there was information about the possible creation by Russia of a gateway module and a number of other blocks. By the way, a promising superheavy booster rocket, which Russia periodically dreams of, would come in handy. Heavy modules just do not "bring" to the moon.

It would seem that here it is - the key to success. Russia station could give a new meaning to the existence of its rocket and space industry. Well, the United States participation of the Russian Federation would save a little money. Meanwhile, contradictions surfaced at an early stage and resulted in a series of unpleasant statements. In April this year, it became known that the United States and its allies are demanding that Russia build a lock - the most “Russian" module - according to American technical standards. Recall that the ISS applies both Russian and Western standards. For example, the chemical components on which the thermoregulation systems of the stations are based are different - water and ammonia in the American segment, triol and isooctane - in Russia.

It must be assumed that Russia was fully confident that even now it would be allowed to play in its own way. A source, meanwhile, said that the American initiative affects all power supply systems and thermal management of the module, life support systems inside it, as well as interfaces.

We are still being kept in the project, but with great pleasure we would have got rid
- said the source of RIA News.

A statement by US experts de facto means that the Russian space industry will have to switch to Western standards. Do not leave in the country two different approaches in design for many years? This is not logical and not economical. At the same time, for the Roskosmos, which is experiencing problems, the transition to American rules looks too harsh and clearly does not benefit. The transition to new standards will not solve the problems with the quality of production and the general organization of labor. But it may well create new problems.

If we now agree with the United States and make a module for American standards, then we will have little chance to justify and continue to use Russian standards if the degree of Russia's participation in international moon projects increases. Therefore, in my opinion, it’s more correct to do everything right away through the compatibility interfaces of various devices so as not to overhaul the production that has been worked out for years
- Corresponding member of the Russian Academy of Cosmonautics, Andrei Ionin, believes.

Around the same time, the Americans made another important statement. According to them, the Russians can (read, “must”) use the American spacesuits instead of the domestic “Orlan”. By the way, it was the latter in Russia that they wanted to see as a prototype of the future product.

We are talking about the fact that spacewalks from the Russian gateway are proposed to be carried out in American spacesuits
- told RIA Novosti a source in the space industry. 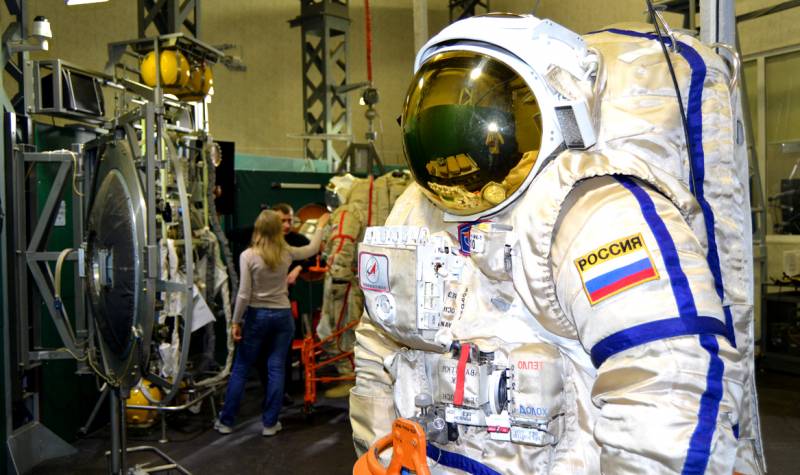 Western partners explained the proposal by the fact that in Russia lunar spacesuits are not being created now, and keeping two different sets in a small station is irrational. It is worth adding that when using US spacesuits, systems for providing EVA should also be made for American equipment. So the question is serious and complex and you just can't let it go on the brakes.

Needless to say, shortly after the statements by the United States, harsh statements from representatives of Russia followed.

I think that it is they (Americans. - Approx. Ed.) Should strive to go into space in our spacesuits
- said the senator, the first member of the Federation Council of the Russian Federation from the legislative branch of the Republic of Crimea Sergey Tsekov.

To believe in the latter, of course, is difficult. The likelihood that the Americans will choose some not yet existing Russian spacesuit is negligible. Trump in general is very fond of demonstratively defending national interests and this case will not be an exception. The leading role of the Americans in the development of the station is also quite obvious. And the United States will dictate the rules.

What future can the program expect in general? If there are no alternatives (and they are not yet expected), the station can begin to function as early as the 2020s. But with or without Russia is another question. And it lies not so much in the technological as in political the plane. In the end, after a couple of years, the United States is likely to be able to completely abandon the Russian engines and Soyuz spacecraft. So Roscosmos will have to wedge itself into the new NASA program if it wants cooperation. Even if not equal.
Ctrl Enter
Noticed oshЫbku Highlight text and press. Ctrl + Enter
We are
Why is the moon still not owned by the Americans?
US forces Russia to abandon ISS in favor of its project
Reporterin Yandex News
Read Reporterin Google News
10 comments
Information
Dear reader, to leave comments on the publication, you must sign in.