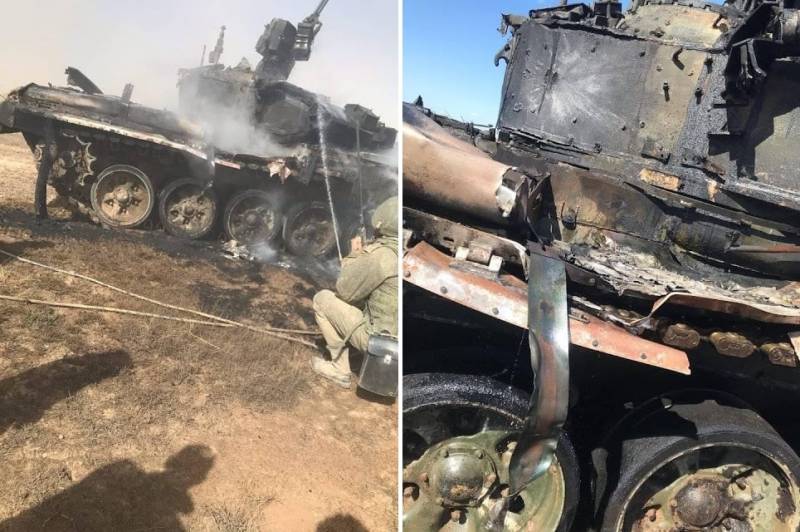 Photos of the T-90A tank, accidentally knocked out of the Konkurs ATGM installed on the BMP-2, during an exercise at one of the training grounds in the Astrakhan region, appeared on the Web. There was no penetration of the tank's armor, there is no information about the casualties, but the external "body kit" of the combat vehicle suffered significant damage.


According to some sources, the damaged tank belongs to a separate tank battalion of the 1st Guards Motorized Rifle Regiment of the 2nd Guards Taman Motorized Rifle Division of the Western Military District (military unit 23626). On social networks, they are discussing that a box with spare tools and accessories saved from breaking through the side projection of the T-90A. 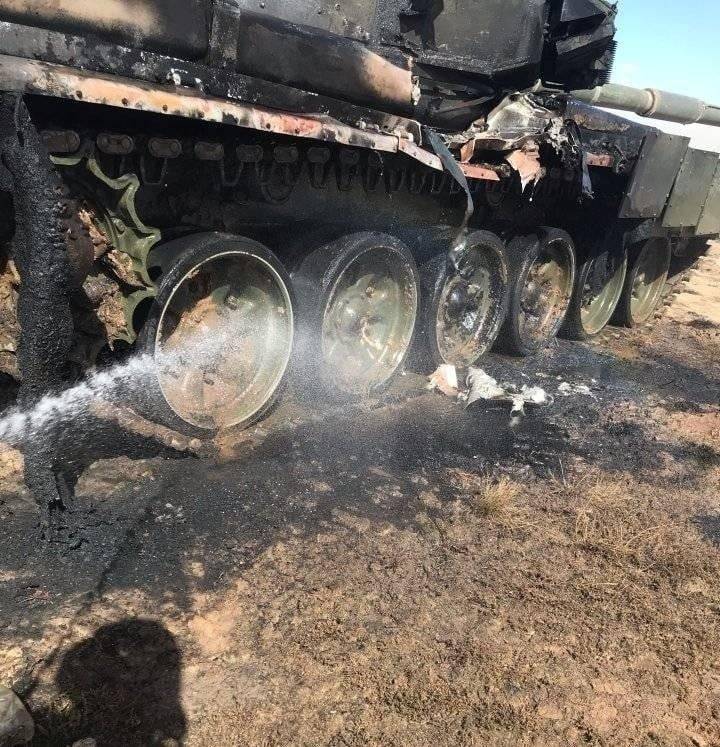 There were no comments from the RF Ministry of Defense, so it is not known when exactly this incident occurred. But on September 13, 2020, the Day of the Tankman was celebrated in Russia, so the exercises could be timed to coincide with this event, because this is one of the most revered holidays among the troops.

Readers of the specialized Internet publication Voennoye Obozreniye shared their views on this matter.

Targets are illuminated at night with a red light, so it is absolutely forbidden to smoke at the shooting range at night - no one knows where the gunner will turn the tower. Boxes with spare parts (spare parts, tools and accessories) are not hung just for fun, they partially save the tank from the enemy or from bungling. The armor held out, well, it got smoked a little. For a beaten two unbeaten crews are given. This is the experience of both tankmen and anti-tankers.
- the user seregatara1969 wrote in detail.

I'm inclined to think it's more of a luck here. As the commentators said above, the armor is practically not affected at all, which means that the "body kit" has dispersed the cumulative jet. Well, the ATGM, most likely, accidentally flew into this tank, that is, the operator did not target any vulnerable zones there. Thank God if the crew is alive and well. Here they wrote about burns ...
- judged alexmach.

In combat conditions, shooting at friendly (friendly fire), unfortunately, is a common occurrence. In my time during exercises, one T-62 hit another T-62 with a blank, in the rear of the tower. I did not break through the armor, but a blower that came off broke the loader's arm
- a certain Bad_gr told about the incident from his experience.

Recently, they laughed at the Americans, who hit a tank with a shell during an exercise, so a response from higher forces flew in. You can not laugh at the mistakes of others and even at the enemy
- hinted the MUD user.

Do you really think that a missile with a warhead was used during the exercises and at the same time did not "burn" a single millimeter of armor? They were shooting a training one, either the mechanic drove into the line of fire, or the operator decided to aim at the "live" tank and accidentally fired. I see a burn from the remnants of the mixture of the main engine and no more. Perhaps something else caught fire on the armor
- Kosty threw in an interesting thought.

Judging by the traces, SHTORA (“Shtora-1” - a complex of electro-optical active protection - ed.) Did not work or was not activated. And now, having slightly modified the spare parts box, you can use it instead of active armor. Double benefit!
- says the user with the nickname Mimino.
Ctrl Enter
Noticed oshЫbku Highlight text and press. Ctrl + Enter
We are
The monument to Marshal Konev is not demolished by Czech Russophobes, but by Russian propaganda
Scolding everyone for demolishing monuments, Russia should look at itself
Reporterin Yandex News
Read Reporterin Google News
4 comments
Information
Dear reader, to leave comments on the publication, you must sign in.