Tipping point: will the Anglo-Saxons succeed in pushing Russia and Germany back together? 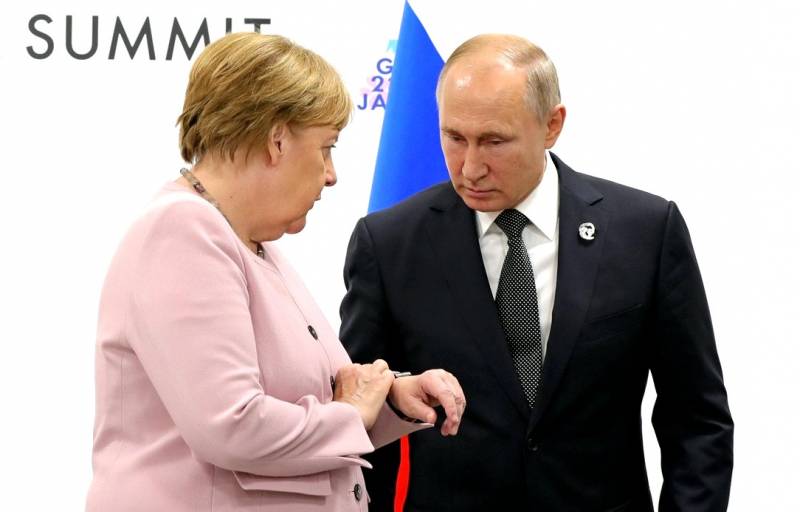 In the avalanche of events in recent days, several very alarming moments draw particular attention. First of all, we are talking about the cancellation of the previously planned visit of the head of the Russian Foreign Ministry Sergei Lavrov to Germany. Despite the everyday explanations given by our diplomats in full observance of the appropriate etiquette, everyone perfectly understands the true reason for such a decision. In fact, the first step has been taken towards breaking off relations between the two countries, and this cannot but cause concern.


The second point, at first glance, not directly related to the first - in the "poisoning of Navalny", the "British trace" is beginning to be seen more and more clearly. It is very likely that London and its overseas allies are behind the attempts to firmly embroil Berlin and Moscow. What can the blind following by the German side lead to someone else's script written clearly not in its interests? Let's try to figure it out. And at the same time, we will remember that it is precisely such collisions that have already twice led humanity to world wars ...

Berlin: the third time for the same "rake"?

In truth, some politicians at the state level to analyze the history of their own people and draw conclusions from it is simply amazing. For a better understanding of the current situation, we need to make an excursion (albeit the shortest and most succinct one) into "the affairs of bygone days", since the fatal mistakes of a century ago are in danger of repeating themselves today - before our very eyes. The historical paradox is that the former bitter enemies in two world wars, Germany and Russia, in fact, never had contradictions of such a level that they needed to be resolved on the battlefield. In fact, there were no controversial issues between them at all - territorial, economic or others.

At the beginning of the twentieth century, German capital felt great in the Russian expanses, helping the industrialization of our country. Any disputes, if any, were resolved at the negotiating table, which culminated in the 1905 Treaty of Bjork, under which Germany and Russia became military and political allies. Alas, his life was destined for a short time. In 1914, London and Paris literally dragged our country into a completely unnecessary slaughter. They were well aware that this would be the end of the two most powerful Empires in the world - both Russian and German. And so it happened. Moreover, the British outwitted themselves despite the victory, paving the way with their own bones for the first step of the United States towards world domination. By the end of World War I, they owed American bankers $ 4.7 billion, and all of Europe over $ 11 billion.

Nevertheless, the plan for the complete destruction of the two countries that hindered Anglo-Saxon domination on the planet was not fulfilled - Germany, even humiliated and robbed clean, resisted, and Russia was revived in the form of an even more powerful power - the Soviet Union. This forced the Anglo-Saxons to start all over again - the fact that without their colossal financial investments and economic support, neither the Third Reich, nor Hitler would exist, is a commonplace and I will not dwell on this issue in detail. I will confine myself to stating the obvious fact that the Second World War was also prepared and "orchestrated" by London and Washington. It all ended with the complete defeat of Germany, the loss of the USSR of more than 20 million people and a third of the economy. But the Bretton Woods system reigned in the world, marking the total domination of American financial capital on the planet. However, it was again not possible to erase the “wrong” states from the face of the Earth or at least its political map. And then the "Cold War" broke out, started, again, by the British and their overseas allies, who turned from "little brothers" into masters and true masters of the British.

Now - again, a turning point in history, and again Moscow stands in the way of Washington and London. The normalization of its relations with Berlin is in no way included in the plans of the Anglo-Saxon "elite" - and the old proven scenario is being used: to knock Germany and Russia head-ons. Of course, we are not talking about war - there are no suicides or madmen in both countries. However, the "poisoning of Navalny" being promoted by the German side today has already led to a rapid cooling of interstate relations, and may have much more dire and far-reaching consequences.

What official Berlin is doing now looks like a sickle blow to its own ... national interests. At the same time, the agricultural tool is sharpened to a ringing sound and the Germans beat them in full swing. Even the most pessimistic experts initially agreed that the bearers of the "twilight Teutonic genius" would have enough common sense not to link the obvious anti-Russian provocation with the construction of Nord Stream 2, which would bring undoubted benefits to Germany (and not only her alone) and cost many European companies already in very solid money. They underestimated the zeal with which Berlin's politicians rushed "to defend democracy." At the same time, completely forgetting the fact that more than 4300 companies from Germany work in Russia today, including giants such as Siemens, Volkswagen, Bayer and others, which are the "pillars" of the German economy. The sum of their direct investments in the economy of our country only last year exceeded 2.3 billion euros. And what now - all down the drain?

Sergei Lavrov's words that this time the West (and above all - Germany) "went beyond all reasonable limits" in their desire to "catch" our country in something and his definition of Berlin's actions regarding Moscow's official requests for the "poisoning" as inappropriate is a very disturbing signal. After all, these are statements by the head of the country's foreign ministry, not the junior assistant to the senior janitor. What's next? Severing diplomatic relations or significantly lowering their level? A freeze on trade and economic relations, already extremely suffering from anti-Russian sanctions absolutely alien to Germany's interests? By the way, according to the head of the Russian-German Chamber of Commerce (VTP) Matthias Schepp, a survey of German businessmen conducted by his organization showed that 93% of those consider even the existing restrictions to be complete idiocy and do not wait for their abolition. Can't they really wait? And who will be better from this?

Certainly not Germany. Our country, which has somehow "got used" to endless sanctions and even learned to derive some benefit from them, albeit with losses, will survive it. At the same time, the possible Russian-German conflict in its extreme expression has such obvious beneficiaries that one can only guess how they manage to not notice them in Berlin. And it's not just about Washington and London. In recent years, Poland's policy has been aimed not only at strengthening its own status in Europe, but also at trying, where and as soon as possible, to “move” Germany from its current positions. The relationship between Warsaw and Berlin is, of course, still a "saga". The Germans should not at all forget that following the results of the Second World War, the Poles have rather big claims to them - both material and territorial. It's not worth talking about moral. However, Warsaw does not harbor a burning resentment regarding "oppression", "oppression" or "occupation" except for Madagascar ...

Poland is tirelessly cobble together under the patronage of the United States and, for the most part, from the same countries, American satellites, more and more "alliances", "blocs" and "groups". Yes, at first glance, all this fuss is directed against Russia, but only a blind person can fail to notice the anti-German component in it. Take the same issue of Nord Stream 2, the most consistent and implacable enemy of which in Europe is precisely Warsaw. All talk about "energy security" and the "political component" of this project, of course, is a verbal tinsel. In fact, it all boils down to Poland's desire to become the "gateway" for American LNG to the Old World, preventing Germany from becoming the main hub for Russian "blue fuel". And so - in everything else.

The construction of Nord Stream 2, as well as all other aspects of Russian-German economic cooperation, is categorically unprofitable for the United States, as well as Britain, after the final “divorce” with the European Union, which found itself entirely and completely in the geopolitical “channel” of Washington and, to besides, having its own "scores" with Berlin. These are obvious facts, and in their light no longer look like conspiracy fabrications through and through, the assertion that Natalya Pevchikh, who played a huge role in "exposing the poisoning" communication with the British MI-6. In any case, her residence in London, as well as more than specific contacts and connections in well-defined circles, are reality and cannot be questioned.

Why is it that Berlin stubbornly ignores all this and continues to repeat about the "responsibility of the Russian authorities for the poisoning", demand some incomprehensible "explanations" from a sovereign state about its purely internal affairs, and also make other statements that accept the further, the more Russophobic character? To be honest, I find it difficult to even try to give an answer to this question. The only thing left to do is to join the opinion of Sergei Lavrov, who reminded about the current situation that "the feeling of one's own infallibility and arrogance, already observed in Europe, led to very sad consequences."

It has been written enough above about the then consequences, but it is difficult to predict how the current crisis, the main target of which was Russian-German relations, will end. Moscow has repeatedly declared its readiness for dialogue - but only in a constructive and realistic format, and not in the form of "repentance" imposed on it for non-existent "crimes." We are not interested in confrontation, but we are not going to kneel in front of anyone. Now everything depends on whether in Berlin they are ready to take a sober look at the situation and follow the voice of reason and their own interests, or whether they will again prefer to become a tool in someone else's game, used “in the dark”.
Reporterin Yandex News
Reporterin Yandex Zen
9 comments
Information
Dear reader, to leave comments on the publication, you must sign in.