Symmetrical response: what measures can Russia take in response to US air provocations 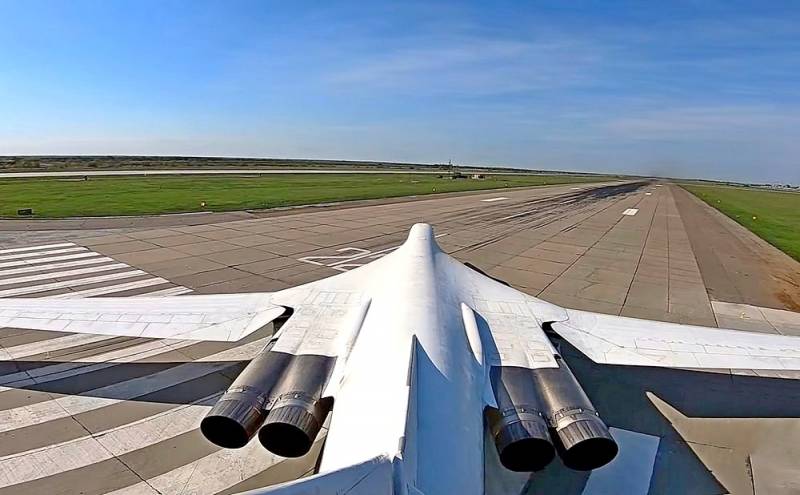 Today I would like to return to the recent scandalous visit of the troika of American B-52H strategists to our Crimean borders. When they flew half of Europe, starting from the British airbase Fairford, accompanied by Allied aviation (over Europe they were accompanied by fighters of NATO countries, over Ukraine fighters of the Ukrainian Air Force), in order to virtually bombard the new grouping of Russian troops of the Crimean fortified area and the Black Sea Fleet base deployed in Crimea RF, which are part of the Southern Military District of Russia.

And it seems that it's okay, well, the guys flew, what will become of them? Moreover, we flew with the transponders turned on, we were still flying them over Poland, a common thing, why raise a noise in vain? Well, the guys tried to check our air defense system, for which they raised three of their AWACS (two American, one British) from the Black Sea, we did not give them this, sending eight of our Su-27 and Su-30 interceptors towards business something. Don't meddle, civilians, in our military affairs, we'll figure it out somehow!

The natives as partners

I agree, I don’t climb, routine work, we check them, they are us, no one is going to bomb anyone. On the other hand, if he is not going, why should he fly in vain? Moreover, they would not have reached the Crimea in real military conditions, they would have been shot down by our air defense systems over Ukraine.

Therefore, I don’t understand that puppy delight that rushed about this from the shores of the country of evergreen tomatoes. Like,

look, maskali, be afraid, we are coming to you! And not alone, but with his older brother - the famous urkagan! Now we will powder you. The Crimean bridge is your unfinished one, and we ourselves will destroy with our "Neptunes", and our elder brother will erase everything else with his nuclear homing bombs, all your rusty troughs, which you are so proud of, which are part of the Black Sea Fleet, and all the rest of the floating and walking Moscow debris , located at ease in our Crimea.
This I am quoting only the most polite comments on the official Ukrainian resources. I understand, of course, people have been living in a parallel reality for the 7th year already, digging the Black Sea, single-handedly opposing the hordes of Mordor, holding them back on their eastern and southern borders, protecting Europe from Russian saber-toothed tigers with their chest. But do not understand that in the event of war they will become the very platform for military operations, where all the battles will unfold, in my opinion, this is beyond the bounds.

No, I can still believe that people “feel such a personal dislike that they cannot eat,” but to dream of being left without an eye, if only the neighbor was left without two, this is already a clear overkill. Moreover, in my opinion, they did not ask their fellow citizens whether they wanted to be left without an eye in spite of the Muscovites or not?

With their older brothers, everything is clear. Those at all times behaved with the natives in the same way, starting with the Indians who were given typhoid blankets, and ending with the most recent examples in Iraq and Libya. In Ukraine, they are also practicing coordination of actions against the Russian Federation, completely neglecting the interests of Ukraine itself. Here is what the United States Command in Europe (EUCOM) said about this:

At the same time, the B-52H bombers with the callsigns JULIA51 and JULIA53 flew over Ukraine with the Mode-S transponders turned on, while the JULIA52 plane turned on the transponder only sporadically, and, presumably, flew east of Kiev. Bombers with the callsigns JULIA51 and JULIA53, during their flight over Ukraine, carried out a demonstrative loitering north of Crimea in the area of ​​Genichesk and Melitopol, while the point closest to the Crimea where the aircraft were located is located about 40 km from the coast of the peninsula.

This strategic bomber mission is part of the long-planned deployment of six B-52s at the British Air Force Base Fairford in Gloucestershire, England. The mission provided partners with valuable airborne training. In addition, the mission demonstrated how forward-deployed aircraft and crews, including B-52 bombers, provide collective defense capabilities and provide the United States, NATO allies and partners with strategic and operational breadth to contain Russia and ensure security.
Tell me, is there at least a word about Ukraine, except that they use its territory as a stage for a future theater of military operations? Well, why are the non-brothers happy here? What are they destined for the role of cannon fodder and the first corpses in this performance? Strange logic. But we still need to think about how to react to such actions. Is it worth it to continue to release this on the brakes?

For those who have forgotten, I will just remind you how the visit of our strategists to Venezuela ended. When a pair of our snow-white Tu-160s landed at the Caracas airport, the Americans reacted very painfully to this. They generally don't like it when someone invades their tender underbelly. Maduro almost paid for this with his own chair, face to face with a palace coup staged by the Americans, when only the support of the Russian Federation and the PRC, as well as his own resilience and loyalty to him of his armed forces, saved him from repeating the fate of Alieda and Noriega. See how Americans are protecting their living space. Why don't we take an example from them?

Symmetrical response is better than asymmetric

I am not calling for a military coup in Ukraine, although I would very much like to. Or to bring our troops there - it's too late, you should have thought earlier, in 2014. Now our destiny is to watch how the Americans are bringing their troops there, after all, they are not limited to the voyages of their strategists (for a long time, their naval base and tracking point have been under construction near Ochakovo, on the construction of which their "sea bees" work, about the acquisition of the Ukrainian Navy with the latest American boats Mk VI, you also know everything). I call for at least symmetrical actions.

We have already created our bases for the VKS and the Navy in the SAR, in Khmeimim (the base of the VKS RF) and Tartus (720th PMTO - the point of logistics for the Russian Navy); resumed our presence in Vietnam, where we revived our point of logistics and support of the Aerospace Forces and the Navy in Cam Ranh, the deep-water bay of which, since 2013, we can also use for the repair and maintenance of our ships and submarines; concluded an agreement with Cyprus, for the right to enter deep-water ports of which our warships have now been received for repair and maintenance, which has increased the autonomy of the BMZ (near sea zone) ships participating in the Syrian operation. We do not have many ships in the ocean zone, so the use of the ports of Cyprus for refueling our BMZ ships has expanded our capabilities in the Syrian and Mediterranean directions.

The time has come, in response to the unfriendly actions of the "partners", to consider the renewal of our presence in Cuba and Venezuela. To begin with, there will be enough PMTO for the entry of our SSBNs and SSBNs with ballistic missiles on board. There is also a suitable deep-water port in Cienfuegos in Cuba. And near Caracas there is a military airport that is quite suitable for receiving, refueling and servicing our VKS strategists patrolling the Pacific and Atlantic coasts of the United States and Canada. I think this will be enough to cool off some hotheads at the Pentagon planning flights of their strategists near our borders. Especially in Ukraine, if it does not have enough brains of its own.

PS While the material was being written, on September 14, the same strategists made another voyage to our Crimean shores, guessing just in time for the visit of the President of the Republic of Belarus to Sochi, where he met with his Russian counterpart. It is becoming obvious that the visits of American guests have already been set on a permanent basis, at an interval of 10 days. The Kremlin has responded so far only by sending our snow-white Tu-160 swans to the shores of foggy Albion. But London, as a younger brother, here performs only functions technical support by Sentinel R.1 aircraft of the Royal Air Force, carrying out electronic reconnaissance and target designation. His older brother Washington will most likely have to be dealt with separately. I indicated the methods above.
Reporterin Yandex News
Reporterin Yandex Zen
20 comments
Information
Dear reader, to leave comments on the publication, you must sign in.