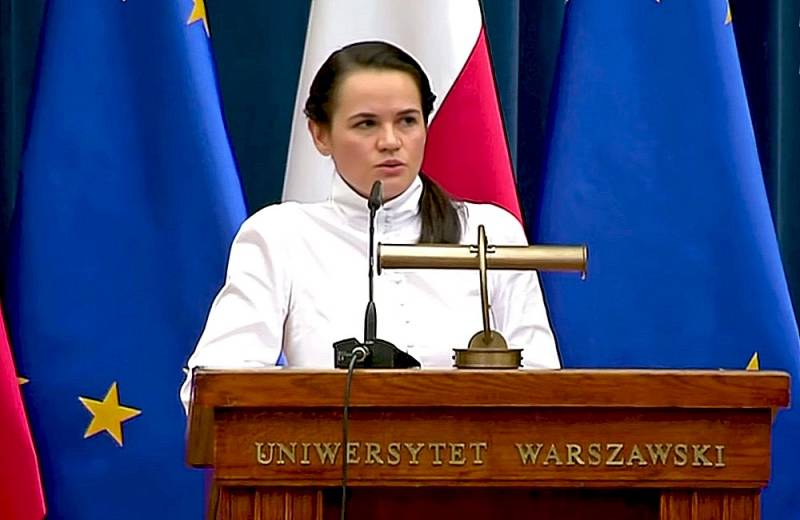 Not so long ago, when discussing the question of what point in the world would become the place of a “head-on collision” between Russia and the “collective West”, where their interests would finally and irrevocably clash, causing direct and open confrontation, various versions were expressed. Someone fought for the East of Ukraine or Crimea, someone - for Syria. Venezuela or even Africa was named as the site of the "last and decisive" battle. And practically no one could have foreseen that the forces, representing two different civilizational poles of our time, would converge in an open, practically, battle on the ground, which is the personification of peace, tranquility and stability - in Belarus.


However, this is exactly how it happened. Today it can be seen with a completely naked eye - the events there represent something much more than just an attempt at another "color revolution", a clash of power and "opposition" or the struggle of the head of state for his own post. Minsk today is a borderline on which issues are being resolved that go far beyond the agenda of one Belarus, the "post-Soviet space" or even the whole of Europe. The stakes are much higher, both sides understand this perfectly and are not going to retreat. So what exactly is happening before our eyes?

The main event of the present moment, of course, is the talks between Vladimir Putin and Alexander Lukashenko in Sochi, and we will, of course, dwell on them in the most detailed way, but somewhat later. In the meantime, it is worth mentioning the "background" against which this truly historic meeting took place. The day before, the Russian president had a telephone conversation with his French counterpart. Emmanuel Macron was in a hurry to "please" Vladimir Vladimirovich with the fact that a French laboratory "confirmed the fact that Navalny was poisoned by" Novichok ", which Monsieur President is" very concerned about. " Obviously, precisely in this connection, Macron also stated that “Moscow should in no case interfere in the Belarusian events”, leaving the country's residents “to decide everything on their own”. As far as is known, Vladimir Vladimirovich politely replied to this that he agreed with the non-interference paradigm in the most categorical way - especially regarding those subjects and countries that are trying to support rogues and impostors, and not the legitimate president, which Russia considers Alexander Lukashenko.

Thus, the Kremlin and the Elysee Palace did not come to a consensus, and they could not come by definition - this is quite obvious. The pressure of the West on our country is growing, as they say, in an ascending order. As expected, Washington has already joined the case - the US State Department's Assistant for European and Eurasian Affairs Philip Riker made accusations against our country regarding the "destabilization of the situation in Eastern Europe". In his opinion, Moscow's main sin is that it "has its own view of the future of this region, which is different from that of the United States." Extreme frankness that does not need comments.

Meanwhile, in Poland and the Baltics, completely controlled by the United States, they are already dividing the wealth of Belarus and deciding its fate. In Warsaw, the head of the local government is ranting about a certain "Marshal's plan" for Minsk, which the Polish authorities are ready to present "to all partners in the European Union." Judging by the statements policy, we are talking about a "stabilization package" containing "a number of measures, mainly of an economic nature", which will be proposed to Belarus - naturally, if there "will be legal elections." To tell the truth, you do not even know what to be touched by more - the petty cunning of the Poles, who clearly intend to take over all the most attractive objects and structures of the national economy of the neighboring state in such a simple way, or that boundless impudence with which they undertake to build any “Plans” for the country under a living and legitimate president, who does not at all intend to let them approach Belarusian affairs and a cannon shot. However, Estonian President Kersti Kaljulaid, for example, is showing no less impudence, who began to intimidate Lukashenka with persecution in the International Criminal Court in The Hague "for harassing peaceful demonstrators" and reminding that "The Hague is not that far from Minsk." Presumably, Alexander Grigorievich knows geography just as well and as if not better than some of his utterly presumptuous colleagues. First of all, political. In any case, he demonstrated excellent possession of this subject during a meeting with Vladimir Putin in Sochi, thanking him for "demonstrating that the borders of Belarus are the borders of the Union State, where no one dares to rattle weapons."

Indeed, the summit of the two heads of state, which was so awaited in Minsk and Moscow and so feared in the West, showed that it was not possible to destroy the partnership between them, despite the truly titanic efforts that were made for this. Actually, nothing was said about the further integration of the countries following the meeting. This made some skeptics start speculating that Lukashenka is trying to continue the “multi-vector” policy, but this is most likely not the point. Undoubtedly, during the four and a half hour meeting, "tete-a-tete", this issue was discussed and, most likely, the main words were said. Simply, why now stir up the already inflamed consciousness of the Belarusian "zmagars", throwing them "propaganda material" of the worst kind?

Again, is it worth voicing the completely obvious ?! “Batka” simply has no other options. Here, to paraphrase the masterpiece of Soviet cinema classics, either he leads Belarus to the Union State, or Kaljulaid and others like her drag him to the prosecutor ... Or to The Hague, the difference is not fundamental. Much more interesting, in my opinion, are the warm approval expressed by Vladimir Putin of the constitutional reform initiated by Minsk and the new elections, which, despite all the West's harassment, will not take place "here and now," but in 2022. Based on the position of Vladimir Vladimirovich, all this action is one of the links in the process of bringing our states closer together. Perhaps - with the honorable transfer of power from Lukashenka to the successor who will continue and accelerate this work. No less important are the words spoken by Putin about the closest economic connections between Moscow and Minsk. It would seem, what is the point of repeating the well-known? The meaning is also quite unambiguous.

Recalling the huge Russian investments in the Belarusian economy (only the joint NPP project was estimated at $ 10 billion), Vladimir Vladimirovich made it clear to the West: “We don’t need someone else, but we will not give our own, whoever it is!” This thesis is confirmed by the decision announced by our leader to provide Belarus with a loan in the amount of one and a half billion dollars. Is this the right move? Unambiguously - at least on the basis of how the self-proclaimed "president" Tikhanovskaya "got up" in this regard. Statingthat this aid "will prolong the agony of the dictator, but will not prevent the victory of the people" (the people is she? Ha-ha ...), the militant lady clarified that "Lukashenka, not the country, will pay the debt." Behaving as if she had already seized power, this person once again showed that Moscow has absolutely nothing to talk about and that every effort should be made to ensure that the already small chances of the "opposition" to win are reduced to absolute zero as soon as possible. ... In fact, even before the meeting in Sochi, Tikhanovskaya flirted about the fact that "no agreements signed there with the illegitimate president will have any force." The "new government" will revise them without fail - no matter what they agree on.


Judging by this hysteria, the aunt was seriously scared that Alexander Grigorievich would go to absolutely extreme measures and, as some Western "experts" wrote the day before, "would put Belarus at Putin's feet" during the meeting. These gentlemen have a remarkable ability to invent completely idiotic "horror stories" themselves and then be afraid of them ... However, the West has more than real reasons for concern and anxiety associated with Minsk. Belarus turned out to be the notorious last frontier from which Russia will not retreat under any circumstances - because there is nowhere. And how the Russians know how to fight to the death, in the West they remember very well. They also remember what usually happens afterwards ...

The efforts of Brussels, Washington, Berlin and Paris (not to mention the throat-tearing Polish-Baltic pack) to overthrow Lukashenka immediately and, moreover, now, have a very specific rationale. The coronavirus pandemic has mercilessly highlighted the fact that only some of the most thoughtful analysts had stated before it - the complete bankruptcy of the so-called "Western civilization". Moreover, bankruptcy in absolutely all spheres - economic, political, social and even moral and ethical. The “collective West”, in fact, has absolutely nothing more to offer humanity, except for the “values” that have already reached the point of utter madness, which boil down to the domination of various perverts and other aggressive minorities. Previously, all this vileness was served in an attractive sweetened "package" that seemed to promise "prosperity" and a well-fed life. The coronavirus crisis brought down the false gilding, and the world was presented with a true picture of "civilized countries" shaken by racial and social protests, rolling into the abyss of not just a new, but never before seen financial and economic crisis. In the second quarter of this year, the drop in GDP in the G20 countries broke all records - it did not drop by 7% even during the most severe crisis of 2008-2009. Meanwhile, China's economy is growing at 11.5%. By convening an "urgent debate on human rights in Belarus" at the UN Geneva headquarters, the West is trying, like an ostrich, to "stick its head in the sand," and at the same time divert the world's attention from its own problems, its own complete failure.

There is one more aspect. Russia has created a vaccine against coronavirus and is already ready to provide it to Belarus as one of the components of the support provided. Yes, the West will go to any lengths to prevent our victory on this, most important for today, "front"! Not only Navalny will be poisoned, but a hundred, they will invent lies about Novichok, whatever else - just so that the inevitable does not happen, so that a new era does not begin, in which the world will no longer be unipolar, and countries will not be divided into a “civilized” elite and the "outcasts" she appointed. What era will this be? It's hard to say today. But it can come only in case of complete defeat, which the “old world” must endure in Minsk.
Ctrl Enter
Noticed oshЫbku Highlight text and press. Ctrl + Enter
We are
Ukraine from the inside: traitors, curators and those who watch from the Kremlin
Ten "defeats" of Putin
Reporterin Yandex News
Read Reporterin Google News
26 comments
Information
Dear reader, to leave comments on the publication, you must sign in.