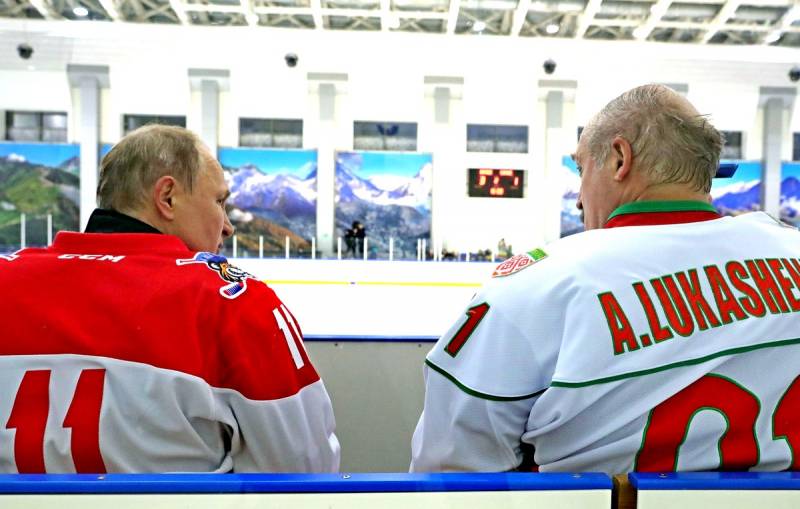 An outside observer, analyzing the events of the last month related to the attempted “color coup” in Belarus, submitted to him through the box, should increasingly be inclined to think that Putin, together with Lukashenka, defeated everyone, beating the opposition in an open confrontation (if not with one left, then two), and now they are only conducting rearguard battles of local significance (that is, they finish off any local nonsense that has come out with a butt).


And this happened only because they were opposed not by the forces of the united collective West, but by small mongrels from Warsaw and Vilnius. I myself insisted on a similar point of view. Like, not according to Senka, a hat, the wrong ones were attacked, learn materiel or take poison and kill yourself against the wall. And we, Grigorych and Vladimirovich, all in white and sparkling armor, having counted all the steps of the Polish-Lithuanian vocational schools, two moves ahead, we fly forward on our mighty armored train, we stop in the commune (that is, in the Union State, well, you understand) ...

But now, rewinding the film back, I understand that the daddy in his RB really faced a hardened enemy who took into account all the mistakes and lessons of previous Maidans, and approached the Belarusian fully armed, creatively changing tactics during the game and instantly reacting to all changes to chalkboard. And these unfinished Polish-Lithuanian revolutionaries are losing their party not at all because they played poorly or not prepared enough, but because they got a hardened opponent who is ready to die but not surrender, in contrast to the soprano from the capital city of Kiev, who performed duties 6 years ago President of the then neighboring state.

And here in Minsk, rolled technology "Color revolutions" for some reason failed. Although before that it worked like a clock. And in Kyrgyzstan, and in Georgia, and in Armenia, I generally keep quiet about Ukraine. And before that in Tunisia, Egypt, Morocco, Yemen, Algeria, Jordan, Bahrain, Oman. In Syria and Libya, this led to civil wars. Iraq lost its independence, and the Libyan Jamahiriya disappeared altogether as a state. You yourself know everything about Yugoslavia, tore the country to pieces. Kuwait, Lebanon, Sudan, Djibouti, Saudi Arabia, Western Sahara and Mauritania also did not pass this cup, only without such dire consequences. The only misfire is Tiananmen Square and Hong Kong, but there are damned Chinese communists, with them only a nuclear bomb. Agree, a beautiful track record, the Polish-Lithuanian revolutionaries had someone to take an example from.

And they took it, in some ways even surpassing their teachers, while showing amazing flexibility and adaptability to all countermeasures of the opposing side. And now I will show you their achievements.

Know-how No. 1: They immediately abandoned the use of protest leaders. Faced with a situation when all the opposition was cleaned out by the daddy, who was in the ground, who was in prison, who was on the run, they, as a single leader and center for decision-making, first used an Internet resource in the form of the NEXTA telegram channel, which the authorities failed to block. This resource acted as a single center of resistance, coordinating the protest of the masses and raising the people to rebellion, non-stop supplying 1 million of its subscribers with fresh information and action plans. This is a new word in the organization of "color revolutions". This have not happened before!

Know-how No. 2: Faced with an effective forceful opposition from the authorities, our creators immediately "gutted" the protest, for the first time using the tactics of a "wandering", "blinking" Maidan, which was called a "partisan" (RB is a partisan land!) and capture of squares and office buildings.

Know-how No. 3: When the security forces suppressed the "partisans" with mobile OMON groups, they switched to the tactics of courtyard Maidans in residential areas, whose members were personally acquainted and communicated with each other via mobile communications. Actions of mass disobedience and demonstrative protest began to be used there (cars with signals on, flashing lights in apartments, people clapping their hands on the side of the road).

Know-how No. 4: For the first time in the history of color revolutions, organizers tried to use labor collective strikes as a method of pressure on the authorities. And even succeeded in this. MAZ, BelAZ, BMZ, MTZ, METZ, MMZ, Belshina, Grodno-Azot, BelZhD and a number of other enterprises have taken this bait. But in general, this protest was drowned, only 27% of enterprises in the country supported it. Old Man suppressed them with an iron hand (stupidly dismissing all the strikers).

Know-how No. 5: Here the old man distinguished himself by using female special forces against the female protest (the girls are so beautiful, all in white and with flowers).

Know-how No. 6: When the women's protest drowned out due to the fact that they began to simply ignore it (stand, well, wait until you get bored!), The organizers transformed it into a youth one. Young people, as the most protest part of society, were used always and everywhere, what to take from the fools? Students, in a word ... Old Man found how to influence them. The boys were simply immediately drafted into the army, removing the reservation of the institutes, moreover, right during the protests. If you don't want to join the army, stay at home or at lectures.

Know-how No. 7: The organizers were not limited to any one social group, trying to involve more and more in the protest. Workers, office workers, youth, IT-specialists, office plankton, football and hockey ultras, criminals, cultural intelligentsia, journalists (even state media) - these friends were attracted. FROM political elites, security officials, athletes and regional elites (city mayors, directors' corps) did not work. Old Man resisted, and the elites did not run. The monolithic nature of the Belarusian governing structures was maintained solely due to the external factor of the Russian-Chinese legitimization of the election results and due to the personal qualities of Lukashenko.

But it must be admitted that in the Republic of Belarus, dad faced one of the most creative examples of organizing a "color revolution" in the world. Flexible, systemic, consistent, multilevel, socially adapted, from the church to hockey fans and criminals. All this from the side resembled a fire in a forest, when firefighters manage to suppress the grassroots fire, it suddenly flares up from above and walks along the crowns, jumping from one dry tree to another. When a mounted fire is covered from a helicopter, it goes under the grass mat and seems to disappear to flare up again in another place.

As a result of all these events, the bottom line can be stated that at the moment Lukashenka managed to maintain control over the state, and the protesters won the right to protest. But as the protests stagnate and the number of their participants decreases, the window of opportunity for displacing the hated "tyrant" is shifting to the left. The element of fatigue and psychological burnout plays into the hands of the current government. The dynamics of protests is negative. The crisis persists, but in a smoldering form. A way out of it for the current government is possible through the translation of political demands into social ones with a gradual fading of the protest. And if this does not succeed, then only through a referendum and a constitutional reform with the change of the presidential form of government to a parliamentary-presidential one, where a balance of power will be achieved between the opposition and the government. But under the current president, the latter option is impossible.

Which exit? Sooner or later, the old man, but before the expiration of his powers, will have to leave and hand over the affairs to the Kremlin's protege, whom we do not know yet, but he will definitely appear. And the Polish-Lithuanian vocational schools, who have shown themselves to be good students of Gene Sharp, will only have to hope to represent their interests in the Belarusian parliament through the fragments of the opposition that passed through the crucible of the White Maidan.

As a result of all these events, as always, Putin won, who came one step closer to his long-standing idea of ​​creating a Union State, once again proving to his enemies that in politics he can do everything except to lose. And he could not lose in Belarus, because the technologies for carrying out such movements were tested there already in Russia in 2024. And their number is already known - March 17.
Reporterin Yandex News
Reporterin Yandex Zen
25 comments
Information
Dear reader, to leave comments on the publication, you must sign in.