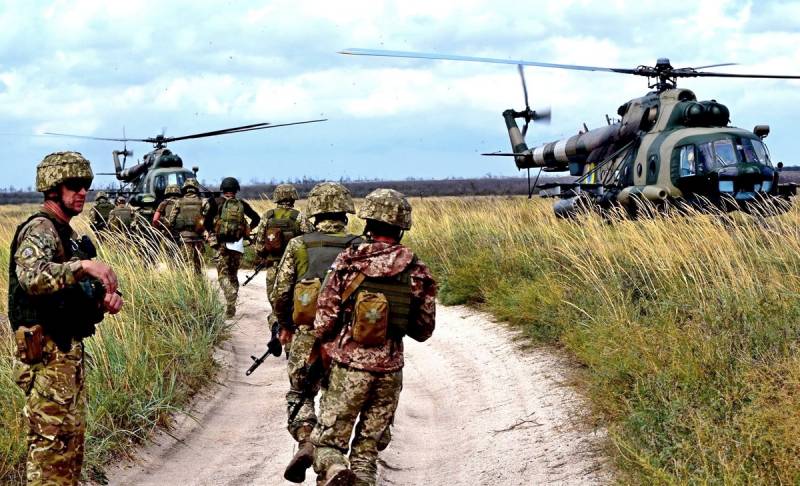 The joint inspection of the positions of the Ukrainian troops located near the village of Shumy (near Horlivka), scheduled for 14.00 p.m. yesterday, quite predictably failed at the very last moment. As usual, each side has its own explanations for this. Naturally - directly contradicting one another.


However, the fact that this is exactly what will happen was clear in advance. This incident is just another step on the disastrous path that official Kiev is following today. What exactly is happening and what can the current events result in?

Much noise around Noise

For a better understanding of the current situation, we will have to go back a little in time to remember where, in fact, it all began. The starting point here can be considered the ultimatum put forward to Kiev by the head of the Donetsk People's Republic Denis Pushilin regarding the arrangement of the Armed Forces of Ukraine in the area of ​​the village of Shumy of their positions. Such actions in Donetsk were quite reasonably perceived as a violation of the conditions of the ceasefire concluded on July 22 of this year. Pushilin, in his appeal, demanded that the Ukrainian warriors bury the trenches, and take the personnel to the positions where they should be in accordance with the agreements reached. Otherwise, the leader of the DPR promised to wipe the fortifications off the face of the earth with artillery fire. The Ukrainian side at first tried to pretend to be ancient Spartans and boastfully reply to opponents in the style: "Come and take!" Subsequently, however, Kiev figured that a new outbreak of hostilities in the East of the country would definitely not contribute to raising the rating of the ruling party in the upcoming local elections and decided to make concessions. Or pretend they are coming ...

I must say that Donetsk all this time showed enviable stoicism and restraint - Pushilin postponed the date of opening fire three times, giving the Ukrainian side a chance to change their minds and not to unleash a new war because of their own stubbornness. Nevertheless, it was clearly given to them to understand: all patience has a limit and on September 9 the artillery attack will take place, as they say, "in any weather." Here Kiev, finally, got through and Zelensky made a response statement: they say, since the “separatists” are so itching to do so, then in the “nezalezhnoy” they agree to conduct a joint inspection of the positions that have become a bone of contention, during which representatives of the opposing sides in the presence of a representative-coordinator from The OSCE will be able to see everything on the spot with their own eyes. It was then that they will be able to make sure that the Ukrainian soldiers under the Shuma did not even equip full-profile trenches and other military engineering structures, but only built a sandbox for themselves to play Easter cakes ...

At the same time, in the presidential office with the most patriotic air, they swore and swore that such an event would be held "only as an exception", literally "for the first and last time." No "zrada", but only a burning desire to show "Western partners" their commitment to the idea of ​​a peaceful settlement of the conflict. It didn’t help ... Only the Ukrainian “war party” that was waiting for a reason, consisting of supporters of Petro Poroshenko dreaming of revenge, suffering from lack of demand for nationalists and just violent outcasts, roared together in a bad voice and called for an ax. That is, to the disruption of the truce at any cost and the removal from power of Zelensky, who allowed such a "shameful surrender to Moscow". A post published in social networks by Yuri Butusov, editor-in-chief of the infamous Censor.net website, in comparison with which Goebbels' Fölkishe Beobachter looks like a children's magazine, “ Murzilka ".

Here, if you please, a verbatim quote:

You cannot carry out criminal orders. Therefore, a person who tomorrow eliminates ... Russian officers - participants in the "inspection" of the positions of the Armed Forces of Ukraine, organized by order of the President, will earn honor and respect in the history of Ukraine. Such an act will reliably frustrate all these operetta attempts to "look into the eyes". Disruption and cancellation of the order of the Commander-in-Chief Zelensky is in this case an important task for preserving the independence of Ukraine ... "
If someone thinks that after that, SBU officers or, at worst, orderlies from a special institution showed up to Butusov's house or editorial office, then they are deeply mistaken. They began to poison the president-comedian, who was already frightened to the point of hiccups. The air clearly smelled of the very "third Maidan", which has long been dreamed of by everyone who has not fully enjoyed the consequences of the first two.

Very serious guys got involved in the case - for example, the organizations "Resistance to Surrender" or "Movement of Veterans of Ukraine", which immediately called for the immediate impeachment of Zelensky. The punishers who were temporarily out of work, eager to return to their dear "amusements" in the form of robberies and murders - these are not Belarusian "zmagars" who climb on benches after taking off their shoes. They promised to "get it" anywhere - even in his administration, even at the place of residence. At both addresses, “patriotic rallies” were announced, which, of course, could not end well for Zelensky. When the main cannibals joined the case - ex-head of the National Security and Defense Council Oleksandr Turchinov and former Prosecutor General of Ukraine Yuriy Lutsenko, who unanimously howled about the "threat to the national interests of Ukraine", it became finally clear that the matter was absolutely bad.

The question is not in the positions in which this couple indulged themselves after the Maidan, but in the fact that during it it was she who played perhaps the most vile and bloody role. There are so many crimes on both of them that there will be enough for ten higher measures and a couple of exceptional ones ... What should they turn their heads to one more president? Yes, like a chicken! Moreover, this promises a return to very soft chairs. Poor Zelensky, taken into such a "siege", did not wait for the assault and, according to his own habit, chickened out, backing up. So much so that only the smoke from under the wheels went! The inspection, of course, was canceled. Moreover, the officially declared reasons for this immediately make it clear that the clown and the gayer are in power in the country, since they represent the purest buffoonery. It turns out that the event broke down solely "through the fault of the DPR representatives, who at the last moment put forward a number of impossible demands." And, besides, those who refused to provide for "inspection" by the Ukrainian side ... two dozen of their own positions!

Excuse me, but about any mutual or "cross" checks and it was not just a day before the meeting under the Noises! However, even these absurdities pale before another "reason" - it turns out that one of the representatives of the DPR insisted on declaring the position of the Armed Forces of Ukraine "in full uniform and with a flag"! Why didn't they write about the drum ?! In such a situation, I would certainly have inserted a mention of the drum, beating off an ominous beat, on which the presumptuous foe intended to take the position of powerlessly grinding their teeth "warriors". No, well, really - it would be even funnier! In the DPR, however, all this "humor" was not appreciated and said that the responsibility for disrupting the joint inspection lies solely and solely with Kiev, which suddenly began to put up completely unimaginable "Wishlist" that the meeting did not take place. In particular, to demand negative tests for coronavirus from representatives of the DPR!

According to the head of the DPR Foreign Ministry Natalya Nikonorova (who has no reason to disbelieve), all these nonsense were voiced literally half an hour before the start of the event - well, in order to prevent it from happening with a guarantee. In general, Donetsk is confident (and this opinion is fully and fully supported by the representative of Russia in the Trilateral Contact Group on Donbass Boris Gryzlov) that Kiev "jumped" from the inspection precisely because it had something to hide. That is, the preparation, contrary to the ceasefire agreements, of positions for a future offensive is indeed being carried out, and so zealously that it is no longer possible to hide it. What conclusion follows from this? Yes, very simple and extremely unpleasant - the war cannot be avoided.

By the way, the rhetoric of the official Kiev, which has changed again, testifies to exactly the same thing. Continuing to talk nonsense about "upcoming meetings at various levels", including in the "Normandy format" (which in reality no one is going to hold with them), its representatives again spoke in the "language of war", worthy of the most Russophobic times of Poroshenko. The head of the foreign policy department of the "nezalezhnoy" Dmitry Kuleba began to assure that "peace in Donbass will come only when the Russian troops leave there." And the head of the National Security and Defense Council of Ukraine, Oleksiy Danilov, suddenly began to make vague hints, from which, apparently, according to his plan, someone in the Kremlin should have shaken their veins:

We will continue to try to negotiate with Russia so that it leaves our home, but if this fails, we will have to resort to implementing other draft NSDC decisions ...
I wonder which ones? Pan Danilov is keeping quiet about this, preferring to keep an intriguing mystery, but at the same time looking rather silly. The only consolation (albeit very weak) for Kiev can be considered that the European Union on the eve extended the sanctions "for the occupation of Crimea" for another six months. Well, extended, so what? We got used to it for a long time.

For Ukraine itself, and, above all, for its current government, the prospects are not at all cheerful. It is your will, but the sharp exacerbation of the "war party" there is very well connected with the recent flights of American bombers, which have practiced nuclear strikes against Russia, over Ukrainian territory. Kiev is simply not left with a choice, it is forced to go to the end and play not "pretend", but the suicidal role of "battering ram" against our country, which is seriously prescribed for it in Washington. In case Zelensky or anyone else suddenly decides to balk (at least because of his own pathological cowardice), gasoline and matches are already ready for the next "Maidan". Poroshenko, of course, is a complete nonsense, and in addition, he is also a complete drunk, but in order to lead the country to the "last and decisive", these qualities are enough for the eyes. Others, in fact, are not required here. It is very likely that in retaliation for the failed "color revolution" in Belarus, Moscow will receive a Ukrainian offensive in Donbass this fall. This is the minimum. You can rest assured that there is a considerable number of alternatively gifted figures in the "nezalezhnoy", who seriously believe that if something happens "the B-52, soaring in the sky there not so long ago, will unleash nuclear bombs and missiles on Russia. The fact that Washington firmly intends to fight Moscow for Ukraine to the last Ukrainian will probably never reach them. Extremely arrogant and threatening statements, again sounding from Kiev - proof of this.

Naturally, none of the options for the further development of events in the "nezalezhnoy" - neither the military nor the "Maidan" (which will inevitably end with the same aggravation of the conflict) in no way suits Russia. Perhaps it's time to act out your script after all?
Reporterin Yandex News
Reporterin Yandex Zen
3 comments
Information
Dear reader, to leave comments on the publication, you must sign in.