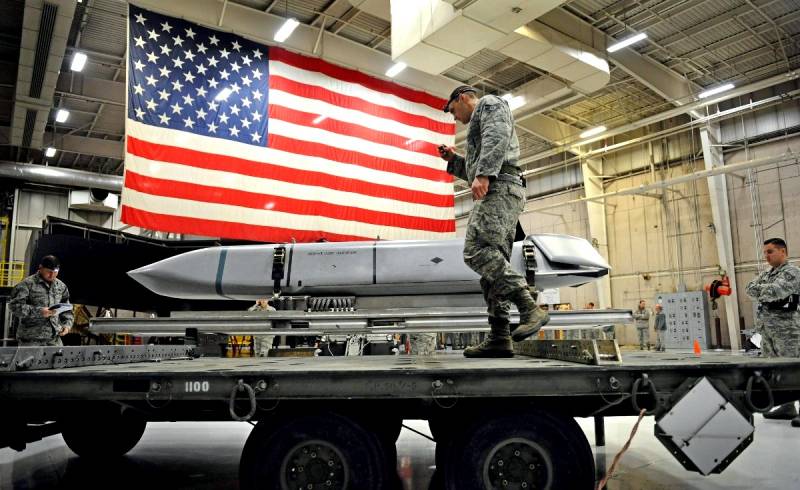 A very significant event took place last week. Three strategic bombers of the US Air Force capable of carrying nuclear weapons entered the Nezalezhnaya airspace and, demonstratively, with transponders turned on, flew over it, accompanied by a Ukrainian Air Force fighter, almost to the Crimean border. This gesture from the Pentagon could have far-reaching consequences.


It should be borne in mind that this happened against the background of the US withdrawal from the INF Treaty and an outright reluctance to extend START-3. Washington intends to invest colossal funds in modernizing its nuclear arsenal. At the same time, information has long been leaked to the press that the Pentagon is considering the possibility of relocating nuclear weapons to Eastern Europe, closer to the borders of Russia. So far, rumors remain rumors, but there is no smoke without fire.

In Europe, the American nuclear arsenal was first deployed in the mid-fifties of the last century to contain the USSR and the Warsaw Pact countries. Tactical nuclear weapons were transferred to the territory of NATO members, where a Soviet strike could presumably be directed: Germany, Belgium, the Netherlands, Turkey, Greece and Italy. As a result of the outbreak of an arms race in the Old World, the total number of nuclear charges by the beginning of the seventies amounted to more than seven thousand.

International detente came after the signing of the INF Treaty. By 2000, there were already 480 American nuclear bombs in Europe and Turkey, which could be used by the US Air Force and its allies. In 2001, the withdrawal of tactical arsenal from Greece and Great Britain began, and it was seriously reduced in Germany. It is believed that today about 150-200 B-61 bombs with a total capacity of 18 megatons remain in Germany, Italy, Belgium, the Netherlands and Turkey.

But now the US is consistently upsetting the fragile balance of international security.

At first, they unilaterally withdrew from the key INF Treaty.

Secondly, in an accelerated manner put into service tactical nuclear warheads of low power on their "Tridents", which radically lowered the threshold of its possible use.

Thirdly, the Americans have developed and tested the B61-12 nuclear bombs with improved characteristics, which they intend to deploy at a base in Germany.

Finally, Washington's constant hints that this arsenal in Europe may be moved to the east are haunted. The scheme is as follows: the United States, together with its allies, are conducting provocative exercises on the Russian border, forcing the Russian Defense Ministry to react. Each retaliatory move is interpreted in the Western press as "Russian aggression". This is followed by plaintive statements that the existing NATO contingent in the Baltics is not enough to stop the Russians.

The deployment of tactical nuclear weapons in the countries of Eastern Europe will be the natural result of such a propaganda campaign. Judging by the recent "flight" of the B-52, it may appear even in Ukraine in the medium term.
Ctrl Enter
Noticed oshЫbku Highlight text and press. Ctrl + Enter
We are
Ukraine from the inside: traitors, curators and those who watch from the Kremlin
Ten "defeats" of Putin
Reporterin Yandex News
Read Reporterin Google News
1 comment
Information
Dear reader, to leave comments on the publication, you must sign in.