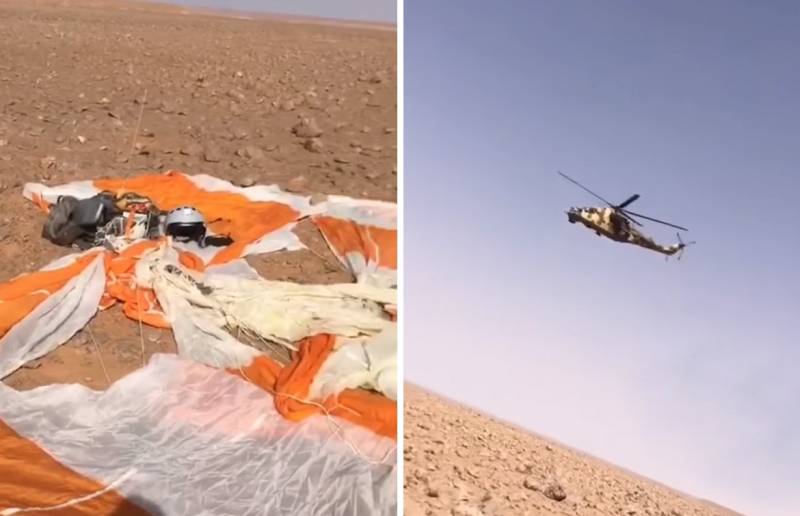 A video appeared on the Web with a Russian-speaking MiG-29 pilot who was allegedly shot down over Libya. The video, shot by the pilot himself, was posted on his YouTube channel by the user Fighterbomber.


The footage shows a parachute spread out on rocky ground to attract the attention of the rescue team. On it is the pilot's helmet and the included emergency beacon. The pilot says that the plane was damaged 70 km from the base. He did not reach his airfield and was forced to eject. When falling, the pilot hit the stones hard.

He clarified that he is 45 km from his base and is going to "go into the valley", leaving the property on the ground. In his words, he intends to start moving in the direction of his base if a helicopter with an evacuation team does not appear in the near future. The author speaks in a breathless and agitated voice, demonstrating a panorama of the surrounding “Martian landscape”.

The pilot notes with satisfaction that "jeeps with the enemy" are not visible on the horizon. However, he did not identify himself and did not say on whose side he was fighting in Libya. However, he greets a Mi-24P helicopter with the coloring of the Libyan National Army that has flown by with genuine joy and hope. The pilot explained that they had found him, but the Mi-24P could not land and now the Mi-8 would fly for him.

I'm happy! That's it, now Mi-8 will come up and take me. These cannot sit down. I am glad. Thanks guys
- the pilot sums up emotionally.


Users of social networks and various sites began to discuss this video with enthusiasm. But when it was removed, it is unknown, since the pilot did not give the date, saying the word "today". Presumably, we are talking about the MiG-29 of the LNA Air Force, which was shot down over the Al-Hamra desert, 45 km from the airfield in the city of Sabha.

Yes, all this is bullshit. This is a staged movie. I wonder how he flew to the ground on such a torn parachute and only hurt himself a little on the stones
- the user Borik is categorical.

I could be wrong, but it looks like this is just a prank. The parachute is very similar to the brake one, and not the one used for rescue
- Someone thinks.

Normal parachute from the K-36 DM chair. And it was all about a month ago, they say. And exactly where it is written
- sure NN52.

It would be interesting to read the instructions attributing to the pilot after the ejection, to shoot a video about the situation: "the stones, the parachute unfolded, the leg hurts - hit", the report of the tourist / blogger level. And how happy they came for me ... And at the end I did not forget to take off my face, everything is according to the classics. Cinema and Germans. Hollywood is resting
- comments the user with the nickname "Senka Shaly".

What nonsense, the pilot took his phone with him for the flight? IPhone? Maybe he also posted his flight mission on Instagram?
- a certain Tuzik is indignant.
Reporterin Yandex News
Reporterin Yandex Zen
2 comments
Information
Dear reader, to leave comments on the publication, you must sign in.