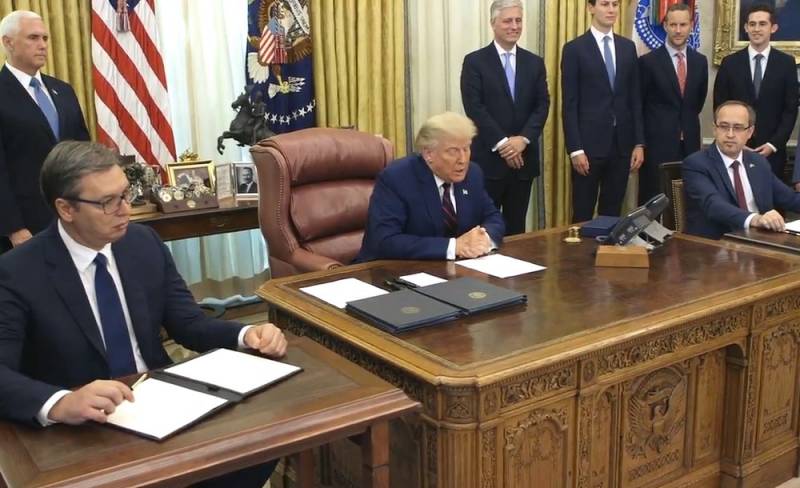 The day before, President Trump reported an extraordinary diplomatic success. If the statement from Washington is to be believed, the United States managed to reconcile Serbia and Kosovo without the slightest participation of Russia. How should one treat such a formulation of the question?


On September 4, in the Oval Office of the White House, an agreement was signed to normalize relations between Belgrade and Pristina, the capital of the Republic of Kosovo, which it did not recognize. In general, given the entire history of their relationship, the event can really be considered a breakthrough. But there are important nuances.

At first, in reality, no bilateral agreements have appeared. Serbia and Kosovo have signed separate agreements with the United States to act as a mediator. For Washington, which is consolidating its position in the Balkans, this is undoubtedly a diplomatic success. But the official directive of Belgrade is still not to sign any papers with the unrecognized republic.

SecondlySerbia managed to obtain from Pristina a moratorium for one year on attempts to join any international organization, considering it "creeping legitimization." For example, Kosovo has already been able to become a member of UEFA, and its football team even takes part in sports tournaments. The ban on the unrecognized republic from joining UNESCO is supported by Russia. Such an annual moratorium can be considered a foreign policy success for Belgrade.

Thirdly, President Alexander Vucic was able to stop the territorial expansion of the Kosovars to the strategically important Gazivode hydroelectric power station and the entire power supply system of the region. Two years ago, the Serbs were forced to raise an army with a gun when Pristina tried to capture it by military force. By agreement with the United States, the Albanians de facto refuse to expand in this direction.

Fourthly, a new highway between Belgrade and Pristina will be built with American money, and the United States is also undertaking to guarantee the safety of Serbian investments in Kosovo. In addition, Belgrade has achieved the lifting of Albanian sanctions against Serbian goods and the supply of Serbian communities on the territory of the unrecognized republic.

Finally, Pristina was able to achieve something. Kosovo will be allowed to join the so-called Balkan "mini-Schengen". Residents of the republic will be able to travel without a visa through the territory of Serbia, North Macedonia and Albania.

In general, so far Belgrade appears to have benefited most from the agreement. But the White House also benefited from it. Many opponents deservedly criticized the American president for not knowing much about international policy... On the eve of the November elections, Donald Trump managed to make two diplomatic "breakthroughs" at once. Just the other day, he was able to reconcile Israel and the UAE. Now he seems to have reconciled the irreconcilable Serbia and Kosovo.

Another question is how long this next "deal of the century" will last. Despite some concessions, there are many dissatisfied with the agreement in Serbia itself. There are many more of them in Kosovo, and this is not surprising. It is quite possible that the Kosovo authorities will bury these agreements in November.
Reporterin Yandex News
Reporterin Yandex Zen
9 comments
Information
Dear reader, to leave comments on the publication, you must sign in.