Fast Anschluss or Gradual Integration: What Scheme of Belarus' Accession Does the Kremlin Need 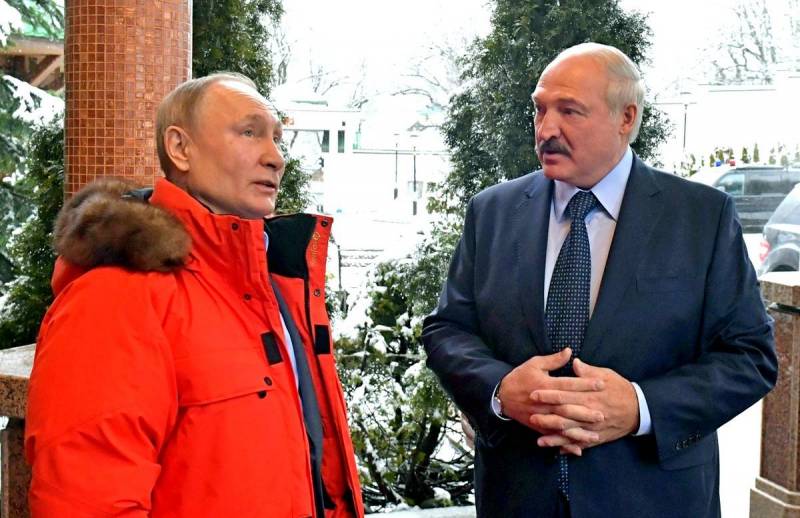 Against the backdrop of unceasing mass protests, a representative delegation from Moscow arrived in Belarus. On Wednesday, the talks were held by the heads of the foreign affairs agencies of the two allied countries, and today President Lukashenko and Prime Minister Mikhail Mishustin will hold a confidential conversation - a whole delegation from Russia arrived in Minsk on three planes. Soon after this, the first foreign visit of Alexander Grigorievich, whose legitimacy was not recognized in the West, to the Kremlin, was announced.


Political analysts around the world are discussing whether President Lukashenko will "surrender Belarus" to Putin in exchange for maintaining stability and personal power in the country. Opinions on this issue are diametrically opposite. Let's try to imagine which variant of “settling” the situation would be the most favorable, taking into account the mutual interests of the Russian Federation and the Republic of Belarus.

It is generally accepted that the Union State was viewed by President Putin as one of the options for his own preservation in power after 2024. For this, the supranational structure had to turn from “paper” into something real, but Lukashenka’s colleague rested his horn, avoiding integration. So, in December last year, he refused to sign the "31st road map", which provided for the creation of a number of important supranational bodies.

Such sabotage of the fulfillment of treaty obligations caused obvious discontent in the Kremlin and led to an “oil war” with Belarus, as well as a number of unpleasant scandals. The pressure did not help, "Old Man" nodded strenuously for the help of the West, which was allegedly ready to lend him a shoulder at any moment. The events after the 2020 presidential elections showed that these hopes were illusory, and now Alexander Grigorievich himself is ready to fall in front of Putin like a ripe pear. The temptation to take and annex the whole of Belarus to Russia, as eight new regions, and at the same time allow the near-Kremlin oligarchs to improve their affairs by privatizing state property, is very great. However, there are several important nuances.

At first, brothers-Belarusians are now very heated up against Lukashenka, therefore any such actions will be perceived by them with hostility, and Russia will turn from a friend into an “aggressor”, carrying out an unfriendly takeover. Instead of several million new citizens, the Kremlin will receive an extremely disloyal population, and it does not know what to do even with Khabarovsk alone.

Secondly, the "alternative president of Belarus" Svetlana Tikhanovskaya is now sitting in Lithuania. There is no doubt that she will ask the West not to recognize any actions of Lukashenka as legitimate, and the Union State from the very first days will begin to exist in the regime of international sanctions.

The stage-by-stage integration of two friendly states seems to be much more reasonable. At the first stage, it is necessary to resolve the issue of the transit of power in Belarus. A constitutional reform is needed, as a result of which a ban will be introduced on one person holding the presidency more than twice in order to avoid attempts to usurp power. It probably makes sense to move towards a parliamentary republic by diminishing the powers of the head of state in favor of representative authorities. It is possible to create an analogue of the State Council with oversight functions, which could be headed by Alexander Lukashenko in the future. For example, Viktor Babariko, who recently announced the creation of his party, could replace him as president.

After the peaceful transfer of power, the new head of state, having no trail of claims behind his back, must begin the gradual integration of the Russian Federation and the Republic of Belarus: create supranational governing bodies, allow the deployment of military bases of the Ministry of Defense of the Russian Federation on the territory of Belarus, which will be the guarantor of stability from internal shocks and threats from NATO ... Privatization, apparently, is inevitable, but, probably, it would be better to let them be domestic oligarchs than foreign TNCs, which will simply close competing industries and send them to waste. Within the framework of the Union State, which, rather, should correspond to the characteristics of not a federation, but a confederation that retains a significant degree of sovereignty for Belarus, Alexander Lukashenko could get an important managerial position, combining it with the State Council.

This is not the only option for resolving the political crisis in a friendly country, but it is not the worst one either. By the way, Vladimir Putin himself in 2024, having seen how the population reacts to the irreplaceable power, could have moved to the chair of the head of the Union State, handing over the reins of Russia to another person, without using his "zeroing".
Reporterin Yandex News
Reporterin Yandex Zen
9 comments
Information
Dear reader, to leave comments on the publication, you must sign in.