Navalny and Novichok: Russia is required to humbly admit the verdict 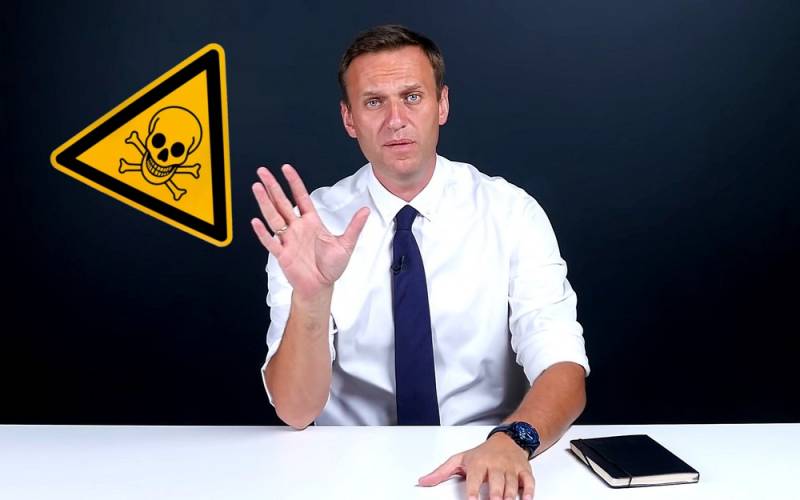 Every time, when faced with another information attack of the West on Russia, one involuntarily wonders: how predictable, monotonous, schematic and clumsy everything is ... As if not people are engaged in inventing more and more Russophobic plots, but some kind of machines in which one once and for all a written program, one and the same algorithm for all times and occasions.


By God, all this already resembles an old, old gramophone, the wheels and gears of which rotate with a strained creak, and the disc worn to the limit, "worn out" almost to the holes, over and over again gives out: "Poisoned ... Poisoned ..." Novice "... "Novice" ... An order from the Kremlin ... "Not tired yet ?!

The "sensational" statement made the day before from the mouth of the official representative of the German government Steffen Seibert that Germany allegedly "received irrefutable evidence of the poisoning of Alexei Navalny with the" Novichok "group's chemical agent was hardly a surprise to those who from the very beginning followed closely enough , to put it mildly, a foul-smelling story that happened to the "beacon of the Russian opposition." The fact that we are not even dealing with an attempt to inflate to the scale of the "crime of the century" the most common everyday incident (I wonder how many people who do not have the happiness of being "prominent politicians", Is poisoned in domestic catering establishments and no one is yelling about it to the whole world?), And with a real special operation, it became clear that the board with a" cargo 300 "from Omsk had to land in Germany.

The Bundeswehr, who did not show itself too brightly in saving its own fellow citizens from the coronavirus pandemic, immediately took the situation with no one, by and large, a third-rate Russian politician who was not interesting and unnecessary in Germany, under complete and extremely strict control. The German military machine, which has become pretty dilapidated in recent years, suddenly started working clearly and harmoniously, bringing back memories of the times of Admiral Canaris. And now Seibert swears that the conclusions of the army medics, "who revealed traces of military agents in Navalny's samples," literally "are not subject to any doubt." What are you, Herr Stefan? What kind of doubts are there ... It has been obvious for a long time that the would-be “oppositionist” will certainly begin to mold not only a “victim of the Kremlin regime”, but certainly a new “Skripal”.

Yes, the versions and hypotheses, whose authors, complete impression, competed with each other in the savagery of their own statements, sounded, barely became aware of Navalny's illness. Why not heaped up in the very first days and hours - the notorious gray mare in the company of a gelding of the same color stands shyly, her head bowed, somewhere to the side. I will give only one of the options that certainly deserves the first prize at this festival of delirium and fiction. Selflessly working out the silver coins of his masters - the American special services, Yuri Shvets, who is sometimes referred to as a "former KGB intelligence officer" but in fact is a traitor and a liar, "pushed" the option that made all authors of trashy paperback books turn green with envy. It turns out that "Navalny was poisoned by the FSB, because he, conducting a secret investigation, visited Novosibirsk the day before, where the Vector Center is located, where ... work was underway on COVID-19"! Naturally, such actions "pose a serious danger for the Kremlin," and Leshenka and that ...

At first I was wildly surprised why the author of such "revelations" was not immediately called an ambulance from a specialized medical institution, but after a few days later the United States announced the imposition of sanctions against Russian virological research institutes, everything fell into place. No, not crazy. He's just a bastard who diligently reads a cheat sheet "lowered from above". However, all this was just a "saying". A clear understanding of exactly where the "investigation" initiated by the West would turn in the very near future emerged when the "Novichok" experts began to comment on the "poisoning" in chorus, albeit at first out of tune, like kitchen cockroaches crawling out of all cracks. It was then that everything became completely obvious.

Cowards with "Novichok" - a new tool for the liquidators?

One of the first voices was voiced by Vladimir Uglev, who in some Western and domestic media is called “one of the developers of Novichok, or even its“ inventor ”. This, as you can see, decided to simply catch a hype on the "hot topic", which is why he began to argue that, since German doctors use the poor fellow with atropine, it is hardly appropriate to talk about the use of military agents, especially nerve agents ... However, after a very short time, professionals joined the business - so to speak, “specially trained people”. On August 26, the "great investigators" from the German Der Spiegel and the infamous "Bellingcat group" reported with great fanfare that they knew for sure: Navalny "was poisoned with a substance from the same group as the Bulgarian businessman Emelyan Gebrev." This figure, if anyone has forgotten, allegedly tried to destroy by smearing the handle of the door of his car with "Novichok", and the victims of the attempt, in addition to Gebrev himself, were members of his family and colleagues. True, no one, as always, died - either not very nervous, or not quite paralytic, this "terrible" "Novice" turns out.

Which magpie brought them on their tail so amazing news, at a time when no official results of analyzes and studies were even discussed, the chatters from Bellingcat, of course, did not specify. Weaved something about the fact that "according to their information, doctors from the German" Charite "contacted the Bulgarian colleagues who treated Gebrev." Probably ... Maybe ... Hailey like ... Be that as it may, but in itself the entry into the game of this extravagant gang, even during their attempts to "investigate" the death of a Malaysian Boeing in the Donbass, fully "lit up" as a creature of the CIA and "Intelligent Service "Made it clear that all the same forces that were behind the" poisoning of the Skripals "and other selective anti-Russian provocations got down to business.

And for sure - in the shortest possible time a “general line” was worked out “at the top”, which from now on were obliged to adhere not only to all persons purposefully attracted to “promote” the main version, but also to other people wishing to scratch languages ​​on this topic. Another "developer of" Novichok "and a defector to the American" paradise "Vil Mirzayanov began to speculate about what" painful and long rehabilitation "awaits poor Navalny, simultaneously undertaking to assert that" the attempt was undoubtedly committed by professionals "and draw similar conclusions that lie completely outside his competence, but have a very specific political background. By this time Uglev also came to his senses, quickly grasping the "agenda". This comrade decided, apparently, to surpass everyone else, and after thinking about "a dose of toxin less than 1/30 of a drop of water, which could be enough for poisoning," he began, to the delight of Western media and domestic "oppositionists", to paint horrifying pictures of how "Russian special services could break into Alexei Navalny's hotel in Tomsk to leave a small drop of poison on his underwear, shorts, socks or undershirt ..." What a passion!

Impressionable people are now forever doomed to imagine how the "bloody gebnya" rummages in the underwear of a "fiery revolutionary", wondering which of the items of his intimate dress is better to poison. Hollywood is resting ... The most interesting thing is that people who are at least a little bit familiar with the subject, it is absolutely clear: schizophrenia occurs. An outrageous information sabbath, which has nothing to do with reality and cannot have anything. The same Uglev, in order not to look like a perfect idiot, timidly stipulates that if the Novichok were poisoned, there would be many more victims. Many times more! And in general - what, forgive me, idiots should be those who give orders for assassination attempts and those who carry them out in order to poison the "unwanted" from time to time with the same trashy poison that does not kill anyone, but only generates international scandals ?! This is an absurdity that has no analogues in world practice!

However, who cares about such trifles when the "official version" has already been worked out and cannot be corrected under any circumstances? "Bitten at the bit" Herr Maas and Frau Merkel as instincts repeat: "Newbie" and that's it! The composition of the friendly choir, which immediately picked up this mantra, testifies for itself. The President of the European Commission, Ursula von der Leyen, pompously speaks about "the need to bring to justice those responsible for the cowardly and dastardly attack". The Prime Minister of Great Britain Boris Johnson is furious, demanding "explanations from the Russian authorities" as the representative of the country, which "was the first to experience the deadly effect of Novichok." As usual, Lithuanian Foreign Minister Linas Linkevičius rushes “ahead of the locomotive”, already knowing for sure that “the blame for the poisoning lies with the Russian authorities”. The speech of the usually phlegmatic NATO Secretary General Jens Stoltenberg is especially impressive. This Scandinavian with the habits of dried herring, this time infuriated in earnest - he not only "strongly condemns the use of a military-grade nerve agent", but also announces some "consultations with all members of the Alliance about the possible consequences for Russia." What's next? New "hellish sanctions"? Another expulsion of our diplomats? Or just a demand to give Navalny the presidential post, and without any elections?

The most categorical objections to this kind of demarches have already been voiced in our country at the official level. Russian Foreign Minister Sergei Lavrov has repeatedly stressed the complete unwillingness of the German side to share any data regarding the real state of Navalny, who is now in Germany. The same was stated by the press secretary of Vladimir Putin, Dmitry Peskov, who quite reasonably reminded that during the initial examination of the "oppositionist" in Russian clinics, no traces of poison in his body were found and close. In order to start the very investigation that the West is now demanding from our country with a knife at the throat, at least the results of analyzes are needed, documenting the fact of poisoning with this or that substance.

Ideally, Navalny's biological materials, after examining which Russian experts could draw independent and independent conclusions. But, apparently, Berlin does not intend categorically to provide them to Moscow, and even more so to give our doctors the opportunity to conduct clinical studies directly on the patient. What for?! The diagnosis has been made, the verdict has been passed - Russia is only required to humbly admit it, substituting its back for another "flogging". However, the West can hardly count on such a turn in this case - at least, based on the Kremlin's reaction to all the threats and accusations that are being voiced at the moment. Another Russophobic campaign, clearly aimed at revenge for the geopolitical defeat of the West in Belarus for the Russian leadership, apparently was quite expected. The next psychosis around Novichok is nothing new ...
Reporterin Yandex News
Reporterin Yandex Zen
13 comments
Information
Dear reader, to leave comments on the publication, you must sign in.