Without Russia: Ukraine will receive gas from the Southern Gas Corridor

13 2018 June
2
A curious turn has been outlined in gas relations between Russia, Ukraine and the European Union. Nezalezhnaya was invited to join the project of the Southern Gas Corridor bypassing the Russian Federation. 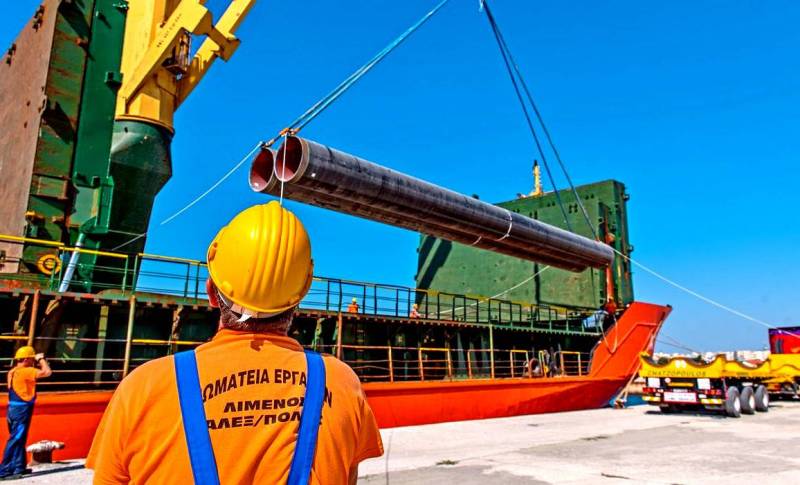 SGC is a very expensive project, which involves connecting a single pipeline of 3500 kilometers in length to the South Caucasus gas pipeline, the TANAP gas pipeline constructed in Turkey and its continuation in southern Europe under the name TAP. It is planned to use the Azerbaijani natural gas field on the Caspian shelf under the name Shah Deniz as the initial resource base. The stated goal of SGC is to reduce the dependence of the European Union on supplies from Russia.

Recall that on May 29 a valve was solemnly opened in the capital of Azerbaijan, Baku, symbolizing the start of the Southern Gas Corridor. President Ilham Aliyev predicted a redistribution of the energy map of the world due to Azerbaijani gas. True, experts note that the former Soviet republic is actively purchasing Russian natural gas for domestic consumption.

On June 12, Turkey opened the second stage of the alternative Russian Trans-Anatolian pipeline (TANAP). President Rajep Erdogan called the gas project "Energy Silk Road." Thanks to TANAP, Turkey will be able to additionally receive 6 billion cubic meters of “blue fuel” per year and provide an additional 10 billion cubic meters of transit to Southern Europe. Since the “Turkish Stream” from Russia is being built in parallel, Ankara will fully meet its domestic energy needs and is turning into a large regional gas hub. 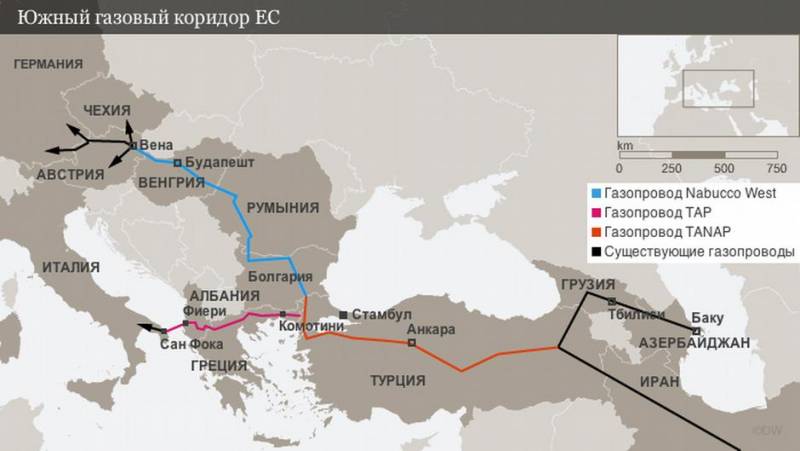 Where is it supposed to take such an additional amount of "blue fuel"? The head of the European Commission on Energy, against the backdrop of progress in the construction of the SGC, said:

We believe that the source of the Southern Gas Corridor is not limited to the Shah Deniz field. Therefore, we welcome the interest of potential additional suppliers of natural gas

In addition to Azerbaijan, Turkmenistan may join the project. The promising Trans-Caspian gas pipeline with a capacity of 30 billion cubic meters per year from Turkmenbashi can connect to the pipeline in Baku. The result is a very joyless configuration for Gazprom.

Moreover, President Petro Poroshenko said that Nezalezhnaya will be able to join the Southern Gas Corridor:

It seems that Europe, together with the former Soviet republics, has wiped out the nose of the “effective managers” of the Russian gas monopolist.
Ctrl Enter
Noticed oshЫbku Highlight text and press. Ctrl + Enter
We are
With the partition of the Caspian hurried: Turkmen gas will flow to Germany
Opening the “Gas Corridor” to Europe, Baku set up the US bandwagon
Reporterin Yandex News
Read Reporterin Google News
2 comments
Information
Dear reader, to leave comments on the publication, you must sign in.