"Reuniting two outcasts": US anxiety about the alliance between Russia and China is understandable 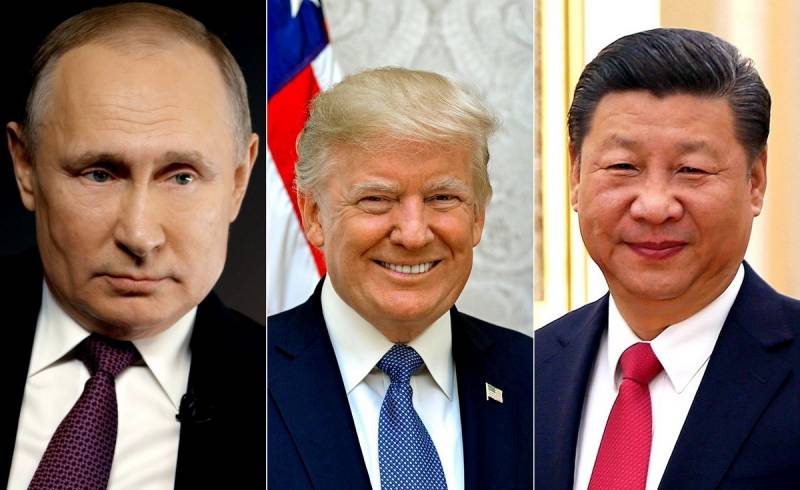 Recently, the topic of Russian-Chinese cooperation in the West has not only excited many minds in the West, but is slowly beginning to turn for some into some kind of obsession - either a mania or a phobia. The voices of the "prophets" are quieter, predicting with great aplomb the "inevitable and imminent end" of the alliance forming between our country and the Celestial Empire.


More and more alarming are the conclusions and forecasts of those analysts who try to look at things soberly, assessing real, not far-fetched tendencies and prospects. What is it about the rapprochement between China and Russia that worries our overseas "well-wishers" and their satellites so much? Why is it for them a sharp knife and a nightmare embodied?

Those who in all seriousness believe that in the West, for example, in the United States, there are no propaganda media, which are pure "mouthpieces" of the state, or, rather, the forces that stand behind it, are in captivity of the most cruel of delusions ... Radio Liberty, originally created for an ideological war against the USSR and Russia, is one of the most classic examples of just such media. Not so long ago, a curious analytical article appeared on the website of this media corporation, the authors of which are extremely concerned that "China and Russia are deepening their ties in every possible way." At the same time, a purely American view of the history of relations between the two countries is demonstrated - according to the deep conviction of the RS journalists, Beijing and Moscow were "pushed into each other's arms" exclusively by Western pressure. This was applied to Russia after the reunification of Crimea with it in 2014, and the Chinese comrades began to have problems with the coming to power of Donald Trump and unleashing a "trade war" against the Celestial Empire.

At the same time, the historical fact that one can find few examples of friendship in the world stronger than the one that existed between the Soviet Union and the People's Republic of China in the 40s and 50s of the last century is tightly hushed up. If not for Stalin's untimely death and Khrushchev's insane, sabotage actions, this friendship would have grown further. In this case, world history, most likely, would have followed a completely different scenario. However, what to take from the Americans - in their opinion, the consolidation of Moscow and Beijing is a forced unification of two "outcasts" who were "thrown out the door" of the bright and beautiful civilized world. At the same time, the thesis is being actively promoted that our country was initially more interested in cooperation, which, by strengthening ties with China, "tried to avoid pressure from the United States." The latter, however, “used” Russia in his own geopolitical “layouts”, not taking into account its interests.

Now, according to the generously quoted analysts, the situation has changed dramatically - in the face of the ever-increasing pressure from Washington and the sinophobia that has greatly intensified in the world after the coronavirus pandemic, Beijing is already forced to seek support from Moscow in order to maintain and strengthen its own status in the international arena. Here is the notorious "One Belt - One Road", which today faces opposition from the West, and cooperation in militarytechnical sphere, and joint economic projects. “China simply has no other way but steps towards Russia,” the RS concludes. At the same time, as confirmation, the words of the head of the diplomatic department of the Celestial Empire are cited that the two countries "will stand shoulder to shoulder" in opposition to the United States.

In principle, the conclusions are quite logical - in Sino-American relations, Beijing has practically nothing to lose. Everything is one to one - and Donald Trump's statements about his full readiness to “finally separate” the economies of the two countries, including trying to “cut off” the Chinese from dollar payments, and other, no less, if not more serious threats from Washington. In particular, according to the local publication Politico, very intensive consultations are currently underway within the framework of a working group consisting of representatives of the US State Department, the Department of Homeland Security and the White House National Security Council (SNB), during which an extremely pressing issue is being discussed: what else to blame Beijing specifically? They offer such “tempting” options as: “genocide of the Uighurs”, “crimes against humanity” or simply “ethnic cleansing”. Such accusations in the past have more than once ended with NATO intervention in the country against which they were brought forward.

What are they so afraid of?

It should be noted that at this stage the greatest concern in the United States is the growing economic cooperation between our countries, which are implementing more and more joint projects of impressive scale. As examples of such, Radio Svoboda names, for example, the construction of “one of the world's largest polymer plants” started by our company Sibur Holding in conjunction with the Chinese Sinopec Group, which should produce the first products (mainly focused on the Chinese market) already in 2024 , citing an estimate of this project at $ 11 billion. Of course, Power of Siberia has not been forgotten either, mentioning which RS expresses the opinion that the intentions announced by Vladimir Putin to build the second stage of this gas pipeline will most likely be implemented. Generally speaking, the issue of cooperation between Beijing and Moscow in the energy sector is quite naturally of particular relevance for the United States.

Still, RS is not exaggerating when it says that "Russia managed to oust Saudi Arabia from the Chinese market," which was the most significant supplier of "black gold" to the Celestial Empire. Not so long ago it became known that one of the largest contracts for the construction of a colossal oil refining and petrochemical complex in the Chinese province of Liaoning, which was supposed to become a joint venture between Riyadh and Beijing, was broken, and at the initiative of the state-owned Saudi Aramco. There will be no construction site. Bloomberg, who reports this, is trying to argue that the reason for the collapse of the project was the Saudis' revision of "their investment plans in order to maintain the volume of dividends," but this is hardly the case.

Rather, the problem was that Saudi Aramco claimed a quota of at least 70% of the volume of "black gold" supplies to the enterprise, which was supposed to consume at least 300 thousand barrels of oil per day. Under the current conditions, the Chinese comrades could well have considered such claims overstated and proposed new conditions to which the proud oil sheikhs did not agree. Tellingly, Beijing has already announced its intentions to promote the project further - but only, most likely, with new partners. I wonder with which ones? The same Bloomberg just recently wrote about the brilliant prospects for American oil workers in the Chinese market, where 37 million barrels of "black gold" from the United States should be received literally in September. Allegedly, even two dozen tankers have already been booked, which are to deliver all this oil surge to the Chinese coast. Only September has already begun, and nothing has been heard about the implementation of such a "deal of the century". The question is, most likely, that it should have taken place in accordance with the commitments that China took upon itself during the conclusion of an interim trade agreement with Washington in January this year.

Nevertheless, as the publication discouragedly notes, "relations between the two countries have deteriorated significantly since that time." It seems extremely problematic for the Chinese comrades to save the American oil industry, which is on the verge of total collapse, to the accompaniment of threats and ultimatums that have been continuously sounding lately from the White House and the State Department. The more likely scenario, as Radio Liberty admits, is a scenario in which Gazprom will implement its plans to triple the export of "blue fuel" to China, which will satisfy at least half of the local demand for it, and other Russian energy companies will do the same. the same with oil. Moreover, the RS believes that in the future Moscow will oust exporters from the US and other Western countries from the Chinese market in all segments in which it can only.

The most dangerous tendency for themselves, American experts see the joining of efforts of Moscow and Beijing in the field of de-dollarization of world trade and the economy in general. If not so long ago such actions of our countries were joked in the West, calling them "useless attempts," but now the analysts there are forced to admit: "The progress made in this direction is significant." Still, the share of settlements in US currency in trade between Russia and China, which was 2014% back in 90, fell below 50% for the first time in the first quarter of this year. And this is more than significant sums, considering that in 2019 bilateral trade between the countries exceeded $ 110 billion. Today, the United States is already taking "the threat of Russian-Chinese efforts to limit the dollar's privileged role in the world" in all seriousness. This, of course, is a cause for concern ...

In fact, the only thing that the United States can hope for is that, as they believe, "there are many controversial issues and" weaknesses "in relations between Moscow and Beijing that may sooner or later spoil them." To confirm this rather dubious thesis, Radio Liberty ends its material with a quote from Zhang Xin, associate professor at the Center for Russian Studies at Shanghai East China University, who says that “relations between Russia and China are becoming more realistic and pragmatic over time, and not a single of the parties does not count on the other to support her unconditionally and in any issue. " Excuse me, but does this indicate bad prospects for cooperation? Yes, rather - quite the opposite.

Enough, perhaps, with Russia "alliances" based more on emotions and some "moral obligations" than on the desire to pursue their own national interests. In such cases, our country always finds itself in the role of an "elder brother", from whom they expect more and more generous "gifts" just for the very fact of "friendship". No, pragmatism and realism in today's rather cynical world, right, where it is more appropriate - especially with such a difficult and peculiar partner like China. So it will be calmer and safer for us - but let the West worry.
Reporterin Yandex News
Reporterin Yandex Zen
4 comments
Information
Dear reader, to leave comments on the publication, you must sign in.