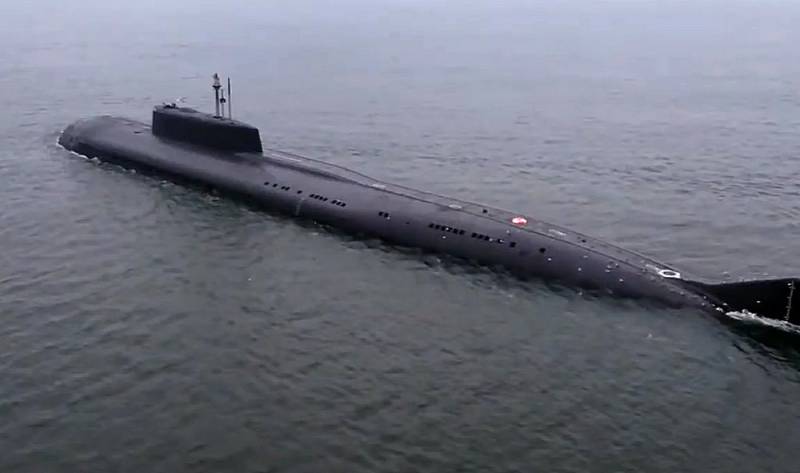 On the eve of the press got very interesting information. The US Navy and the Russian Federation exchanged the "surfacing" of their nuclear submarines in close proximity to the territorial waters of a potential enemy. The event is not trivial, so it's hard to believe in a coincidence. What did the Pentagon and the Ministry of Defense want to say to each other?


Last Friday, the Russian nuclear submarine Omsk surfaced in international waters near Alaska. This is a nuclear-powered submarine of the Antey project, designed to destroy aircraft carrier strike groups at a distance of up to 1 kilometers and ground-based ones at 2,6 kilometers. On board there are cruise missiles "Caliber" and "Onyx", as well as anti-ship "Granites". Omsk is a member of the Russian Pacific Fleet and is based in Vilyuchinsk in Kamchatka.

The fact is that the nuclear submarines on alert don't just float up. The submarine took part in the Pacific Shield-2020 exercise, successfully fired at targets, but then for some reason allowed itself to be detected by American scouts. There are at least two versions explaining this event.

According to the first, some serious emergency could have occurred on board the nuclear submarine cruiser. By the way, Omsk was built according to the same project as the notorious Kursk. In 1999, while on alert in the Mediterranean Sea, the Kursk was discovered, as it rose to an almost surface position, but after that it was able to successfully escape. However, the need to urgently surface at the "Omsk" could arise not only because of an accident on board, but also in the event of some kind of injury or serious illness in a crew member who might need to be evacuated.

According to the second version, there was no emergency, on the contrary, everything went "according to plan." Not long before this event, the American nuclear submarine USS Seawolf briefly appeared on the surface in the Barents Sea. This is one of the best multipurpose, fast and "quiet" submarines in the US Navy, adapted for operations in the Arctic. The fact that her appearance near the maritime borders of Russia is not without reason, said Vice Admiral Darryl Caudle:

The transfer of the Seawulf from Bangor to the jurisdiction of the US Sixth Fleet demonstrates the global combat power of America's submarine forces. Our soldiers are the best in submarine warfare in the world and have unrivaled capabilities designed to strengthen our fleet and increase the effectiveness of the combined forces in competition and conflict.
It would be unreasonable to deny the combat power of the American submarine fleet, but the Russian Defense Ministry also has something. Probably, the "surfacing" of the nuclear submarine "Omsk" near the United States has demonstrative purposes. The submarine successfully fired back on the exercises, showing the Pentagon that it knows the potential theater of operations well. It also surprisingly coincided in time with the TASS report that the Russian nuclear submarine cruisers would soon receive new Kalibr-M cruise missiles, whose flight range would exceed 4 kilometers. Their warhead can be both high-explosive fragmentation and nuclear.

It is quite possible that the sailors exchanged "greetings" in this way.
Reporterin Yandex News
Reporterin Yandex Zen
7 comments
Information
Dear reader, to leave comments on the publication, you must sign in.