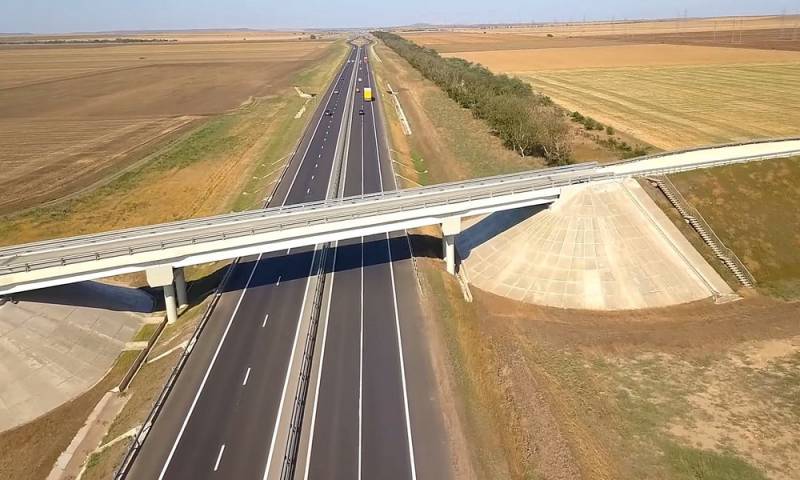 Two days ago, with the participation of President Putin, the Tavrida highway was inaugurated. This highway connected Kerch with two main urban agglomerations of Crimea: Simferopol and Sevastopol. The Crimean Bridge and Tavrida will become real land gates to the peninsula. With the commissioning of the highway, great hopes are pinned on accelerating the economic development of the region.


Reunification with the Russian Federation led to the transformation of Crimea into an "island" due to the introduction of transport, energy and water blockade by Ukraine. While everything is still very difficult with water, the problem of energy supply has been solved. Now the turn has come to improve transport connectivity with mainland Russia. The most important step was the construction of the Crimean Bridge, on which cars and trucks first drove, and then the trains. The launch of Tavrida was the next logical step in the development of the peninsula's transport infrastructure.

The route starts from the bridge in Kerch and is a modern four-lane highway, along which you can drive through almost the entire Crimea. The first stage of construction connected Kerch with Simferopol, giving a convenient detour to the eternal "traffic jam" where motorists previously had to stand for hours. On August 27, the opening of the second stage leading to Sevastopol took place. In the future, additional descents to the sea are to be built from it. The launch of Tavrida should give an impetus to the development of the entire Crimea.

At firstconstruction has been going at an accelerated pace since 2017, and has involved local workers and locally produced materials.

Secondly, the travel time from the Crimean bridge to Sevastopol is drastically reduced to 5 hours. Already now, about 30% of tourists come to the peninsula in their private cars to rest. The capacity of the highway will increase from 15 thousand to 50 thousand vehicles per day. This flow is expected to increase from mainland Russia. The authorities are counting on an inflow of investments in the construction of hotels and other tourist infrastructure.

Thirdly, faster transportation will reduce logistics costs on the part of the business, which can favorably affect the final price of goods on the counter.

In addition, in Crimea, new Technology... For example, during the construction, a special asphalt concrete mixture was used, filled with stone material, due to which the road surface will remain even and durable for a long time. Also, the systems for positioning special equipment in space using GLONASS / GPS satellites were actively used to work at night to speed up the process.

It is worth mentioning also about some archaeological discoveries made during the laying of the "Tavrida". A grave of Scythian warriors, a karst cave with the bones of mammoths and other animals, the remains of ancient settlements and a fragment of a road built during the time of Empress Catherine the Great were discovered. The unique cave with the finds was preserved and studied, and later it will be turned into a new tourist area.
Reporterin Yandex News
Reporterin Yandex Zen
2 comments
Information
Dear reader, to leave comments on the publication, you must sign in.