They won't be allowed to enter Minsk, and they won't be invited to Paris: the negotiation format on Donbass is collapsing 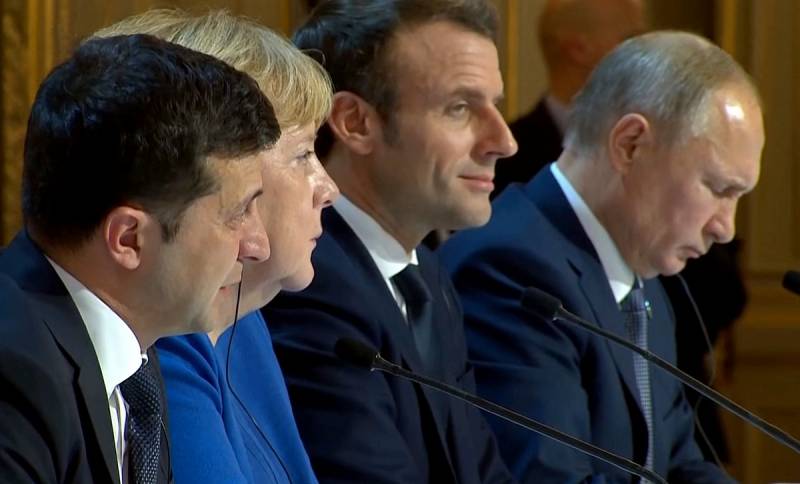 Such topical and burning events as the post-election riots in Belarus and the "poisoning" of Alexei Navalny, fanned by the West to the size of a global scandal, may have one common and very serious consequence, which directly affects not only Belarus and Russia. It is these two moments, or rather, the whole chain of "side" processes launched by them, most likely, will become those notorious "last straws", under the weight of which the "process of peace settlement, which has long been turned into something old and ephemeral," will finally collapse. in Donbass ".


As a matter of fact, it has already stalled tightly and there is hardly any reason to hope for its renewal - at least in the current, let's face it, absolutely senseless and unpromising form. What will be next?

They won't be allowed to enter Minsk ...

As you know, the two main negotiating formats in the above process are the work of the Trilateral Contact Group (TGC), which is taking place in the capital of Belarus (Minsk) and periodic meetings of the heads of Russia, Germany, France and Ukraine, or plenipotentiary representatives of the diplomatic departments of these states, as a rule, on the territory of one of the European countries (Norman). Today, there are not the slightest "movements" in any of these areas, moreover, even the previously planned meetings within their framework are either postponed for a completely indefinite period, or are simply canceled. At the same time, as usually happens in such cases, there are reasons and true reasons that are obvious to everyone, often hidden from the eyes of most outside observers. Take the same Minsk - well, what kind of peace negotiations can take place in a city periodically shaken by street protests, which are dispersed by local law enforcement officers with unabated enthusiasm? Before the summits in such a nervous and not too predictable environment? However, this is just an obvious reason. It was using it that the head of the Ukrainian delegation to the TGC, the ex-president of the "nezalezhnoy" Leonid Kravchuk, began to talk about the possible "transfer" of the negotiating platform "somewhere else." At the same time, requests from the Ukrainian policyfrankly, not weak - he sees either Switzerland or Sweden as a new meeting place ... In a word, something “completely neutral” and preferably Scandinavian. It is worth noting that having tremendous experience and awareness, Mr. Kravchuk hardly knows that the true representatives of the DPR and LPR will simply not be able to get to any of these countries. Obviously, he is just satisfied with the option for the people of Donbass to be represented at the negotiations by the mummers appointed by Kiev.

It must be said that it was hardly worth expecting something different from this figure, whose political and moral credo, while remaining within the framework of the censorship vocabulary, can only be described as “utter lack of principle”. One of the "killers" of the USSR, a politician not only with reduced social responsibility, but with its complete absence - Kravchuk, was clearly appointed to the post of the main representative of Ukraine in the TGC not as a "wedding general", as many saw it, but exactly as once, by virtue of their talents, destroy and stop anything. The fact that Volodymyr Zelenskyy is trying, contrary to the words of his predecessor, to babble timidly that “he sees no point in changing the place of negotiations” does not change the matter. Who listens to Zelensky on serious issues? Moreover, in addition to the unwillingness to communicate in an “inconvenient” place, openly voiced by the Ukrainian side, there is another, much more important factor. Namely, the sharp cooling of relations between Minsk and Kiev, which occurred after the latter, firstly, played an extremely unseemly role in the scandal with Russian citizens preceding the elections, which almost cost Lukashenka unacceptably dearly, and secondly, subsequently and climbed with his assessments of events in a foreign country and extremely incorrect advice about them. The Belarusians, without any sentimentality, pulled back the neighbors who had made a report, almost sent them away. And they made it clear that they did not need their approval at all, but they wanted to sneeze to condemnation. After this rather unpleasant moment, which, by the way, was followed by Ukraine's joining the “all-European” condemnation and non-recognition of the legitimacy of the Belarusian elections, the future of the “Minsk format” seems extremely problematic. Not the one, you know, Lukashenka's man to forgive blows in the back and spitting in the face ...

... And they won't be invited to Paris

One way or another, but the main "engine" of the process of ending the civilian in Donbass and, as it was initially seen, the return of this region to Ukraine, is still considered the "Normandy format", in which the "top officials" of Russia personally act as guarantors of a peaceful settlement. , Germany, France and Ukraine. Tellingly, it is precisely for meetings in such a high-ranking company that at all times, with insistence that turns into obsession, Kiev invariably crammed. It is understandable: “big European politics”, behind their backs are the heads of the leading EU states, who seem to support the “non-profit” ... However, in the end result, all such summits, in fact, turn into self-promotion sessions of Ukrainian leaders, accompanied by empty talk rooms and declarations of the most whatever is good intentions. As soon as it comes to their concrete implementation, Kiev begins to "amnesia" and it begins to deny its own promises. In order to again demand a new "Norman" meeting ... This is exactly what happened during the recent visit of German Foreign Minister Heiko Maas to the Ukrainian capital. Bailing a distinguished foreign guest, like, pardon the expression, the notorious bath leaf, Vladimir Zelensky stubbornly talked about his ardent desire to embrace Angela Merkel and Emmanuel Macron "as soon as possible." And also about the readiness of the Ukrainian side “to hold a meeting of the leaders of the“ Normandy Four ”already at the end of September. In response, the diplomatic Herr Maas expressed the cautious hope that within the indicated time frame it would be possible to seat at least his colleagues - the foreign ministers of the countries participating in the negotiations - at the same table. At the same time, he did not fail to remind Zelensky of Kiev's unfulfilled promises made during the previous meeting - such as the political part of the settlement in the form of the adoption of a law on the special status of Donbass and the implementation of the "Steinmeier formula" into Ukrainian legislation.

What are the presidents with the chancellors ?! As it became known recently, even the meeting of the advisers to the heads of the Normandy states, including the presidents of Russia and Ukraine, Dmitry Kozak and Andrey Yermak, which was supposed to take place today, on August 28, broke down. At the same time, which is quite intriguing, Kiev and Moscow give completely different interpretations of the reasons for this diplomatic fiasco. The Russian version can be reduced to a short one: "there is nothing to talk about." Allegedly, there are serious disagreements over the documents that were being prepared for this summit and categorically disliked by our country's opponents. In "nezalezhnoy" they are trying to reduce everything to "technical reasons" - they say, the adviser to the French president Emmanuel Bonn "broke" on an urgent business trip, and that's all canceled. Believe it somehow poorly. Especially in light of the recently published (including in the "nezalezhnoy") more than a harsh letter sent by Dmitry Kozak to his negotiating colleagues. In it, he bluntly calls the "advisory" negotiations "senseless", and the documents prepared in their course - "meaningless" and decisive. Recently, the Kremlin in all imaginable and inconceivable ways has been demonstrating its tiredness from the endless talking shop in a variety of ways, which is being replaced by real steps to resolve the crisis in eastern Ukraine, which has come to a complete standstill long ago. Moscow time after time make it clear that they no longer intend to play along with Kiev in its stormy activities to simulate a "peaceful settlement" and participate in more and more sessions of combining the unpleasant with the useless, including those held at the highest level. Or concrete actions - the introduction of the "special status" of Donbass into the Constitution, elections, rejection of cannibalistic plans for a forceful "de-occupation" - or ... But really: what "or" ?!

All the events mentioned above (Heiko Maas's visit to Moscow and Kiev, negotiations on new "Norman" meetings, etc.) took place even before Germany took an extremely defiant and, let's face it, clearly biased position in the incident with Alexei Navalny. And, by the way, before the statement made by Vladimir Putin the day before about his readiness to provide military assistance to Belarus, to which he put a fat end to all the timid hopes of the West for Russia's “non-interference” in the events there. After all this, Berlin and Paris may completely evaporate the desire to take part in the endless and meaningless "Norman series". Or they may try to use the termination of communication in this format as a tool to "punish" Moscow for intractability. Well, they are worse off. The Russian side's patience has already snapped a long time ago, and it simply does not withdraw from the negotiations, so as not to give its enemies another reason to accuse it of disrupting them. However, if the initiative for the "funeral" of the completely exhausted "Normandy format" comes from the West or from Ukraine, there is no doubt that the Kremlin will not shed tears. She died, so she died ...

Recently, it has clearly demonstrated a tendency for international politics, and, in particular, confrontation along the "West-Russia" axis, to shift to much more active and harsh forms, without traditional "curtsies" and half measures. The "offensive" launched in Belarus by our adversaries, apparently, is rapidly approaching complete and final failure. Why not counterattack in the Ukrainian direction? At least - forcing Kiev, instead of empty games in the "Minsk Agreements", in fact, to recognize the right of the people of Donbass to self-determination. A ceasefire has been reigning on the line of contact between the Ukrainian troops and the republican forces for a month now - it's high time to force the "non-foreign" to a complete withdrawal of troops and real, not fictitious, ceasefire negotiations, not for a while, but forever. It is highly desirable - with the introduction of the peacekeeping contingent of the CSTO member states into the "buffer zone". No other options acceptable for Russia and Donbass, whatever is said there, in all kinds of "formats" simply do not exist.
Reporterin Yandex News
Reporterin Yandex Zen
5 comments
Information
Dear reader, to leave comments on the publication, you must sign in.