Moscow rejected the ultimatum: is Russia ready for confrontation with the West? 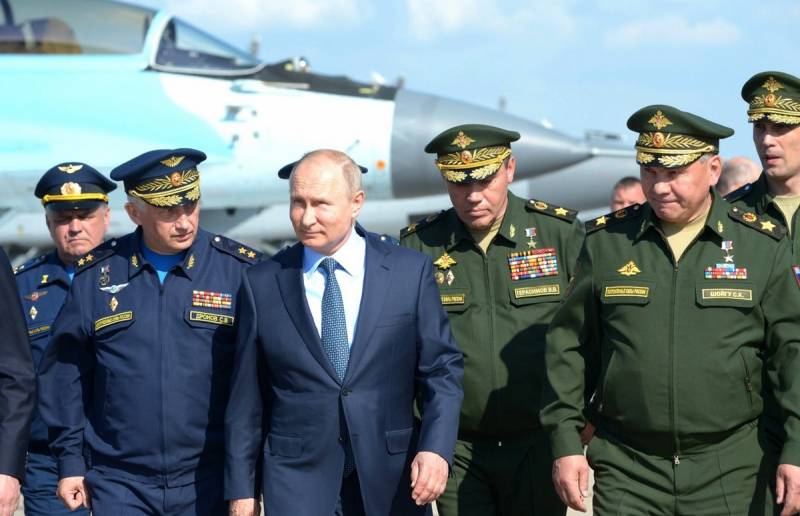 An open war has been launched against Russia. Its official announcement can be considered a statement by the Bureau of Industry and Security of the US Department of Commerce on the imposition of sanctions against domestic research institutes that created the world's first vaccine against COVID-19.


These actions, albeit covered with hypocritical chatter about "suspicions of developing chemical and biological weapons," are, in fact, completely unprecedented. At the same time, they have very specific goals, as well as completely obvious reasons and reasons. Now we will deal with them in detail.

The Kremlin rejected the last ultimatum?

Today, at the time of this writing, it is already quite possible to consider some of the key events of recent times in their relationship and sequence. Moreover, in orderly chains - both chronological and logical, they line up without the slightest stretch. So: at the end of July, after a failed special operation by American and other Western special services aimed at a complete rupture of relations between Minsk and Moscow (provocations with the "Wagnerites"), in Belarus, nevertheless, protest actions begin, which very quickly grow from spontaneous manifestations of indignation into a clearly coordinated and directed from abroad attempt to arrange a coup d'etat in the country according to the typical scenario of "color revolutions". The Russian leadership is repeatedly warned over many open communication channels (there is no doubt about all closed ones as well): “Do not interfere! Don't support Lukashenka! Do not interfere with the unfolding "Maidan"!

The Kremlin, however, ignores the threats that are clearly visible in all these "messages" and makes it clear that it will not leave the Belarusian people alone with the impending disaster. All the numerous misunderstandings and conflict moments between the leaders of the two countries fade into the background and it becomes clear to the West: the Russians will not surrender this ally for anything. Then the next act begins - on August 20, something incomprehensible happens to Alexei Navalny, which is immediately declared in the West "poisoning" and "crime". The "unfortunate victim" is immediately evacuated to Germany, and the clear and super-operative actions of the Bundeswehr, who plays the main role in this "rescue operation", suggest that careful preparation was carried out in advance ... What is typical, numerous German policy, usually not scattered with unfounded statements, unanimously begin to repeat about "villainous poisoning" long before the first analyzes and examinations were made to the patient. Did you read the texts approved in advance? Very much like that.

And now, after all this, the performer of the "main party" finally appears on the stage - US First Deputy Secretary of State Stephen Bigan himself rushes to Moscow to present the leadership of our country with a clear and unambiguous ultimatum. To voice the conditions for complete and unconditional surrender, if you like. Recently, according to the assessments of the leading representatives of the foreign affairs agencies of the United States and Russia, diplomatic relations between the countries have almost reached the point of complete "freezing". And suddenly - an unexpected visit at such a high level! Before visiting our capital, the Deputy Head of the State Department visited “on the front line” - in Lithuania, where he not only met with the “Belarusian Guaydikha”, Svetlana Tikhanovskaya, but also at a fast pace held a meeting of representatives of the most loyal American vassals - from Poles and Balts to Ukrainians. At it Bigan delivered a final and non-appealable verdict: "The elections in Belarus are unfair, undemocratic and not free." Washington does not recognize them and Lukashenka must be overthrown. There is no doubt that he flew to Moscow with the same ideas. As you know, the meeting was held behind closed doors and, according to the official version, "a wide range of issues of Russian-American relations were discussed."

Nevertheless, it is no secret to anyone that there were two main items on the agenda - Belarus and Navalny. At the same time, Mr. Bigan did not even try to hide the fact that he had come to frighten the Russians and threaten them with every conceivable and inconceivable punishment. According to him, he warned his interlocutor Sergei Lavrov that “if the diagnosis of poisoning is confirmed” (and how could he not be confirmed ?!) “The United States will take measures against Russia, before which even sanctions for Moscow's interference in their own elections ”. Judging by the fact that the next sanctions "roll-off" has begun on Russia, Mr. Bigan was sent by Mr. Lavrov to a very specific address. Perhaps, according to the high canons of diplomatic etiquette, but perhaps not. The fact is that Washington understood that the ultimatum was rejected.

Revenge for defeating the pandemic

At the same time, the State Department continues to try to make a good face in a bad game - its head, Mike Pompeo, traditionally setting records in the field of cynicism and arrogance, the other day made a "wonderful" proposal: "The United States is ready to assist Russia in investigating the poisoning"! No, how do you like that ?! Why, then, are the employees of our Investigative Committee still not involved in the investigation into the murder of George Floyd? Maybe it wasn't some policemen there, but Donald Trump personally strangled him with his knee? And Pompeo was present at this ... What right have overseas leaders, whatever their positions, to poke their noses into the exclusively internal affairs of Russia, and even give assessments, which, generally speaking, only the court has the right to? British Prime Minister Boris Johnson, who immediately picked up the "initiative" of Washington, is already broadcasting about "international efforts for the triumph of justice" and "Navalny, shocked by the poisoning". There was no investigation, no qualified examinations, no trial - however, the West already has a diagnosis, a verdict, and a guilty verdict against our country. It is there that they are eager to carry it out as quickly as possible.

Why is this happening and why did it all start right now? Well, first of all, nothing actually "started", but it has been going on for a long time. Since 2014, at least. Short-term periods of "enlightenment", during which the "collective West" for some time reduced the intensity of Russophobic rhetoric by a fraction of a degree and did not take particularly hostile actions against our country for recent years are the exception, not the rule. The coronavirus pandemic, which clearly did not go as planned by those who stood at its origins, also gave some respite.

The “civilized” or, if you wish, “developed” countries should have emerged victorious - renewed, enriched, and proved to the whole world their superiority. Those whose total government debt, according to data recently cited by The Wall Street Journal, already in July this year reached an unprecedented level of 128% of world GDP. The last time something like this (national debt at 124% of global GDP) was recorded in 1946 - after the devastating Second World War, which destroyed half of Europe. At the same time, in Germany, for example, the drop in GDP in the second quarter of this year was 9.7% - the lowest mark since the moment when this indicator was generally started to be calculated. There is no need to talk about the United States ... From the point of view of the "collective West", the fact that China and Russia have demonstrated much better results both in combating the pandemic and in maintaining their own economies is completely wrong, outrageous and subject to "correction. "! And the world's first effective vaccine against COVID-19 could be exclusively American, British or German. Well, Swiss, at worst ... But not Chinese and not Russian! So the 33rd and 48th Central Scientific Research Institutes of the Ministry of Defense of Russia, the Federal State Unitary Enterprise State Research Institute of Organic Chemistry, are announced as "possible developers of chemical and bacteriological weapons" Technology... Only right now, you see, the omniscient Americans noticed their sinister activities and decided to punish! And the whole point is simply that it is the scientists of the 48th Central Research Institute of the Ministry of Defense, together with colleagues from the National Research Center for Epidemiology and Microbiology named after N.F. The Gamaleys have developed a drug that mankind needs so badly now - an anti-coronavirus vaccine.

The "collective West", without expecting it, plunged into the abyss of a colossal economic crisis, accompanied by waves of social protests never seen before, is desperately looking for a way out. It is very similar to what they see him there in the declaration of war on China and Russia. "Cold" - at least. At the same time, they are trying to drive a wedge between the two countries, preventing them from uniting. The same "unwinding" of the civil conflict in Belarus, among others, also pursues the goal of "knocking heads together" between Moscow and Beijing, which have in this country, albeit not opposite, but far from all coinciding interests. It will only get worse. Much worse. Already now, its deputy from Poland, Jacek Sariusz-Wolski, is flirting with might and main in the European Parliament, demanding to immediately disconnect our country from the international payment system SWIFT for "carrying out a hybrid invasion of Belarus" and "interfering" in the elections there. The Russophobia of this MEP, which reaches the level of obvious schizophrenia, has been known for a long time, but one should not forget about the principle: "What a Pole has in his language, an American has in mind." The route of Stephen Bigan's "inspection" trip, which runs through Vilnius, Moscow and Kiev, makes us think about what new meanness and provocations we should expect from both the Baltic states and Ukraine. Well, the "artillery barrage" using the "main caliber" of Washington seems to be just beginning.

It should be understood that in this confrontation, extremely cruel and total, we will not have allies. Even Serbia, accustomed to playing “friendship with Russia,” has already rushed to join the official statement of the European Union, which in fact outlaws “non-democratic and non-free” elections in Belarus and says that their results are not recognized. On a par with Ukraine, by the way ... China? Yes, willy-nilly we find ourselves "in the same boat" with the Celestial Empire, which is now experiencing the same pressure from the West. However, it is worth remembering that Beijing always and in everything pursues exclusively its own interests. Whether his "special" and "unprecedented" relationship with Moscow will withstand the storm now looming is a big question. Turkey?! Well, these are those "allies" - as if they did not hit in the back. In fact, as always in a hard time, our country stands face to face with the whole world, for the most part hostile to it. Well, the coming events will show whether we are ready for a new test.
Ctrl Enter
Noticed oshЫbku Highlight text and press. Ctrl + Enter
We are
Ukraine from the inside: traitors, curators and those who watch from the Kremlin
Ten "defeats" of Putin
Reporterin Yandex News
Read Reporterin Google News
44 comments
Information
Dear reader, to leave comments on the publication, you must sign in.