There is no way out: the accession of Belarus to the Russian Federation becomes the last chance to save Lukashenka's power 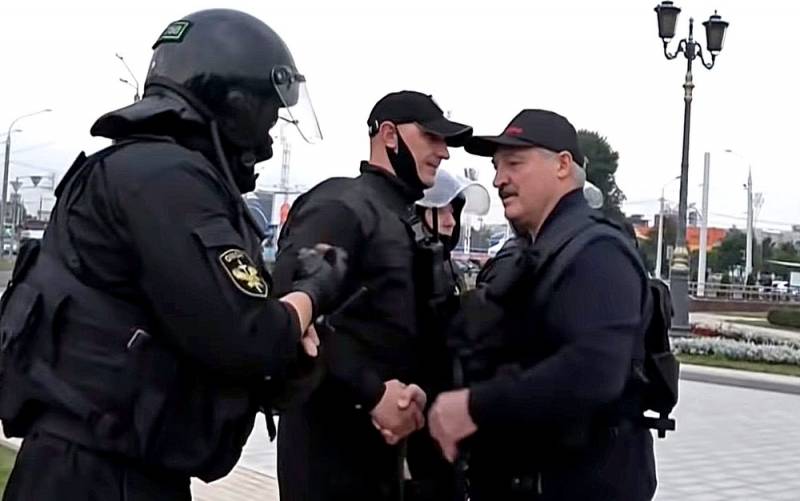 After almost two weeks of mass protests after the presidential elections, it can be concluded that the attempt to carry out the “white maidan” on the move has failed. Having enlisted the support of Moscow and armed with a submachine gun, Alexander Grigorievich continues to speak with the opposition from a position of strength. However, this does not mean that everything is over. On the contrary, for Belarus the real troubles are just beginning.

Maduro and Lukashenko are in exactly the same situation. We do not admit that they were legally chosen.
It should be admitted that, built for decades by Alexander Grigorievich политическая и economic the model went completely bankrupt. Previously, he could afford to maneuver between the West and Russia and bargain, now in the European Union he is expected only in The Hague. The “Venezuelan scenario” means the presence of an alternative head of state “in exile”, for the official Minsk this is Svetlana Tikhanovskaya, based in neighboring Lithuania. The “Belarusian economic miracle” is about to collapse with a bang. The imposition of sanctions by the US and the EU on the purchase of oil and oil products from Minsk will be a heavy blow to the country's budget. Foreign assets of Belarus can also be seized and transferred to the management of "President Tikhanovskaya" and an alternative government.

That's it, the former quiet life for the brothers-Belarusians is over: they will no longer be given it under Lukashenka, and there will be no more after Tikhanovskaya came to power. The opposition does not hide plans for a large-scale privatization of state property, which will instantly lead to a strong stratification of society and an increase in unemployment. Withdrawal from the EAEU, the CIS and the Union State will hit the remnants of the Belarusian economy. Breaking the agreements within the CSTO and turning towards NATO will turn Minsk from an ally into a potential enemy of Moscow. Since not all Belarusians, later waking up from their indignation, will be ready for such radical changes, there will be preconditions for a civil conflict between the western and eastern parts of the country, which historically have their own specifics.

President Lukashenko himself, having played in "multi-vector", remained at the head of the country all alone. He can no longer count on the nomenclature and special services. Only riot police and the army separate it from the giant crowd of dissent under the white-red-white flag. Now every day of his reign will resemble a sitting with a burning candle on a powder keg. Provocations will go one after another, on the rise, and the system's safety margin will sooner or later run out.

Objectively, only Russia can save friendly Belarus from the “Venezuelan” scenario, smoothly turning into the “Ukrainian” one. A few months ago, a compromise variant of the integration of the two allied countries in the format of a confederation with the preservation of their sovereignty would have been optimal, but Aleksandr Grigorievich himself sabotaged and successfully torpedoed it. After his political fiasco, the stakes have risen sharply, and the range of decisions has narrowed. It's time to talk about a full-fledged unification into a “soft” federation, which is quite fair, since Russia is openly taking upon itself the maintenance of Belarus at the expense of its budget.

In the first version, we can talk about joining six new regions on equal terms with the rest of the subjects of the Russian Federation. In the second - about the creation of a separate Belarusian Federal District. The third, most flexible option may involve granting Belarus the status of a “federal territory” that is not part of any Russian entity. This is a new legal category introduced with amendments to the Constitution of the Russian Federation. Within its framework, Minsk, by agreement with Moscow, could get itself a "special status" in the format of the Union State.
Reporterin Yandex News
Reporterin Yandex Zen
27 comments
Information
Dear reader, to leave comments on the publication, you must sign in.