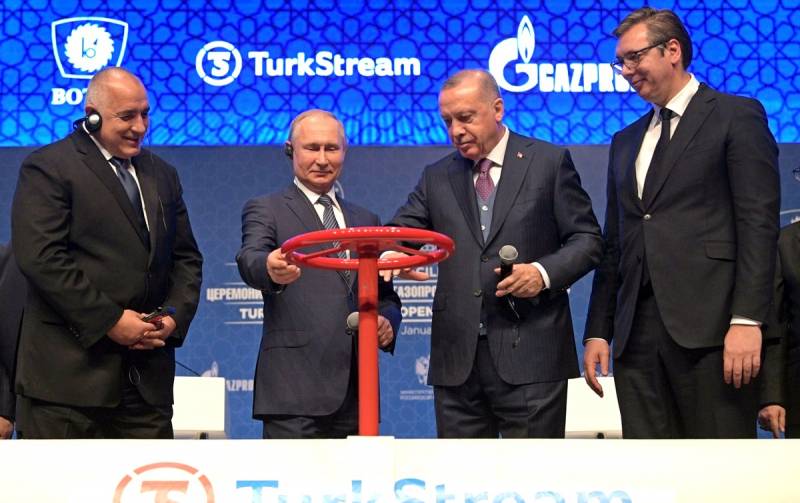 Recently, in the light of the extremely aggravated contradictions between Ankara and Athens, some of the domestic "smart people" allow themselves to be indignant about Moscow's non-intervention in this conflict. On the side of the Greek "brothers in faith", of course ... Like, how is it - the Turks even allow Saint Sophia to turn into a mosque for themselves, the Greeks are indignant to the whole world, and we - no gu-gu! Anyway, Erdogan is going to extract gas and oil in the Mediterranean - to the detriment of the poor Greeks, again. Where is the eternal readiness of Russia to come to the aid of the most varied "brothers" from the Balkans, to protect them with their breasts from the infamous adversaries ?!


Before embarking on such arguments, it is worth considering in more detail - how these same "brothers" in some way relate to our country, how they act in very specific situations and in whom they see real, not declared friends, allies and patrons.

Friendship is friendship, and gas is apart

It was not by chance that I used the word "little brothers", which arouses my persistent hostility. We will begin our conversation about real affairs and more than dubious maneuvers of Russia's Balkan "partners" with Bulgaria. As it became known, the local state gas operator Bultransgaz made a purchase, which is called the "deal of the century" in the country. The matter concerns the acquisition by the Bulgarian side of a 20% stake in the Greek company Gastrade. It doesn't sound very impressive, but this is only at first glance. In fact, by concluding this agreement, Sofia entered the project to create a liquefied natural gas terminal in the city of Alexandroupolis - another gateway for the victorious penetration of American LNG into the Old World.

Ever aching and crying about her own poverty and squalor (you just have to talk about the completion of the Bulgarian branch of the Turkish Stream) Sofia got into the construction, the estimate of which, according to the most approximate calculations, is at least 370 million euros, in theory, "hanging" on itself exactly one-fifth of the costs - in order to then claim 20% of energy supplies. And the planned volumes are by no means small - according to the declared parameters, the terminal will have to have a capacity of 6.1 billion cubic meters per year. Generally speaking, the Alexandroupolis terminal is a key link in an alternative route for the supply of "blue fuel" to Southeast Europe via the Greece-Bulgaria interconnector pipeline (IGB). Alternative, of course, in relation to any projects of our "Gazprom". What, by and large, is the difference - will there be a flow of LNG from the United States or "ordinary" gas from Azerbaijan through the Trans-Adriatic gas pipeline? One way or another, but a blow is being dealt to our energy supplies.

The signed agreement is so important for the "diversification of supplies for the whole of Central Europe" that the Prime Ministers of both Bulgaria and Greece personally attended the signing. It was Kyriakos Mitsotakis, who represented Athens at this event, who expressed great joy that from now on, fellow Europeans "will no longer be dependent on a single source of energy." It is clear from which one ... Both countries, which is characteristic, are a classic example of our Balkan "partners". Both love, when it suits them, to remind that Russians are their fellow believers, Orthodox Christians and, in general, are almost their best friends. At the same time, both Greece and Bulgaria have long been "looking into the mouth" of Washington and with great readiness carry out any commands emanating from there, acting not just against Russia's interests, but to the detriment of it. And there is nothing surprising here - did not all the same Boyko Borisov, who profoundly broadcast after each of his own meanness about "an older Russian brother who will forgive everything," did not swear eternal loyalty to Donald Trump in Washington last November?

During this meeting, the kissing of the shoes of the head of the White House by the Bulgarian prime minister was so earnest that Washington even issued a communiqué following the meeting, which spoke of "friendship and alliance between the two great powers - the United States and Bulgaria." Great power ... You can die laughing! However, in the United States, they do not consider it shameful to shamelessly flatter the natives - if they diligently follow all the valuable instructions they receive. One of those was the demand to "diversify energy supplies." Sophia briskly “picked up” - and now we have the results.

"Brothers Slavs" and other traitors

Washington has every reason to be pleased with the Bulgarian diligence. Sofia transferred the money for the purchase of eight American F-16 Block 70 fighters to the US Defense Cooperation and Security Agency more than a year ago - but not an advance, but the entire fabulous (for Bulgaria, whose parliament members were fundamentally opposed to this deal) amount of $ 1.2 billion immediately! Last month, a large-scale military exercise "Thracian Summer 2020" was held on Bulgarian territory with the participation of the US military. Upon a thoughtful consideration of the legend of these maneuvers, very specific suspicions and questions arise. In their course, the crews of the C-130 Hercules aircraft from the 37th US Air Force Transport Squadron, stationed in Europe, performed "a wide range of joint training missions with the participation of the Bulgarian Air Force." On the part of Bulgaria were involved (military transport aircraft C-27, "Spartan", helicopters AS-532 AL Cougar and Mi-17, MiG-29 fighters, anti-aircraft missile systems KUB, as well as military personnel from the Joint Command of Special Operations Forces - virtually all available manpower and equipment The aim of the exercise was to "increase the interoperability of participants and improve the ability to operate as part of the international operational forces", as well as train the Bulgarian military to "support the US Army as a host."

Bulgaria is thus clearly being turned into a staging area for the impending attack. There are no other targets for the upcoming strike, except for the Russian Crimea and our other strategically important points on the Black Sea coast, whatever one may say. Considering that in two world wars Bulgaria fought on the side of our enemies - everything is more than natural.

Let's return, however, to energy issues. Desperately trying to get into the number of suppliers to Europe of energy carriers, "alternative" to Russian, Sofia is not at all limited to joint projects with Athens. They also intend to make Belgrade happy with "diversification" - with the latter's full support, it seems. The construction of a gas interconnector with Serbia (IBS) for the supply of gas there from Azerbaijan and American LNG, which will have to come exactly through the terminal in Alexandroupolis, was announced in Bulgaria back in June this year. The Turkish Stream branch, passing through the local territory, has not yet come close to completion, and Sofia is already eager to create a competitor for her - for the sake of Washington and for her own benefit! Proceeding from this, suspicions are raised that the gas pipeline being built jointly with Russia, thanks to which the Bulgarian side has already “squeezed” enormous discounts on “blue fuel” from Gazprom, will never be completed at all. Or - it will not be put into operation due to "newly arisen circumstances", which, in principle, is exactly the same. Promises that gas from the "Turkish stream" will go to Serbia "just about" have been coming from Sofia since last year. But the terms are constantly shifting and shifting. At first it was January 1, 2020, then it was about the start of supplies in May, by the middle of summer ... Today it becomes more and more clear that the Bulgarian side is doing everything to prevent Russian energy resources from entering Serbia at all - at least through it territory. Thus, our "blue fuel" is tightly blocked the way to Central Europe, which was vital for Russia. Without this continuation, the entire "Turkish Stream" loses its meaning as such.

And who is burying all the plans of Gazprom and the Kremlin in this direction? Americans? Well, yes, of course, how can we do without them ... However, the direct executors of actions that carry a huge threat to our economic interests are just the Greeks, Bulgarians, and ... Yes, yes - the Serbs! Or do you think that the pathologically stingy representatives of Sofia would start the construction of the IBS interconnector, which, according to preliminary calculations, will cost many millions of dollars (his technical the project is estimated at more than 300 thousand dollars) without first agreeing on this matter with Belgrade? Serbia is offered to receive about 2 billion cubic meters of gas a year through IBS - that's just definitely not Russian. Do you think that "Russia's best friend in the Balkans" Alexander Vucic will indignantly reject such a proposal? After this figure first begged Vladimir Putin for the S-400 "for Christ's sake", and then with an unwavering hand signed the Individual Partnership Action Plan (IPAP) of Serbia with the North Atlantic Alliance for 2019-2021, I personally would not so sure. Moreover, recently Belgrade, which adores news policies It seems that he decided to use “friendship” with Beijing, not Moscow, as a “counterbalance” to the EU and NATO that are pressing on him. According to the data presented in the report of the think tank on foreign policy of the London School economicsSerbia currently receives US $ 4 billion in direct investment and just over US $ 5 billion in loans and infrastructure projects from China. And the gas? Yes, you can buy gas from Bulgarians too ...

From all of the above, a rather paradoxical, but, nevertheless, almost unambiguous conclusion follows: in the current situation, it is precisely the aggressive and impudent actions of Turkey that are beneficial for Russia, with its claims to the energy resources hidden in the Mediterranean shelf of the mercilessly “confusing map” of Greece and in front of its cobbled together a coalition of countries intending to arrange a "big redistribution" in Europe in the field of gas supplies. In the end, what have all these "fellow believers", "brothers-Slavs" and others, excuse the expression, "brothers" done for Russia? Did you help overcome the Western sanctions pressure? Recognized its reunification with Crimea? Nothing like that. Now they have launched a real general offensive against our country on the southern flank of its "gas front". There is no one there to support. And there is no need.
Reporterin Yandex News
Reporterin Yandex Zen
24 comments
Information
Dear reader, to leave comments on the publication, you must sign in.