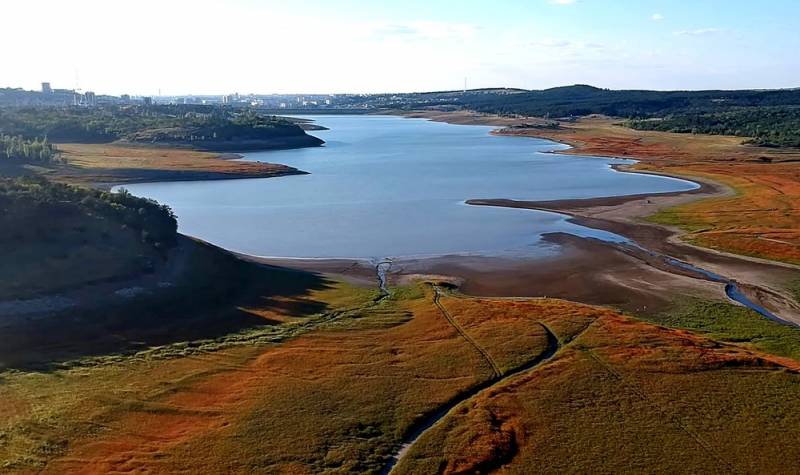 The situation with the water supply of Crimea is increasingly beginning to acquire the features of a disaster. No miracle happened: did not help neither the plane that causes the rains nor the natural watermaker sea ​​water, nor a mobile pipeline hastily built by the military to the capital of the peninsula. Now the Simferopol agglomeration, the most densely populated in the region, is switching to the strictest water saving regime.


Simferopol and its environs are fed by three reservoirs - Ayansky, Partizansky and the so-called "Simferopol Sea". Snowless winters and abnormally hot summer weather led to the fact that they dried out almost to the very bottom. With the norm of 3,9 million cubic meters of water in Ayanskoye now less than 2, in the second instead of the normative 34 million - less than 7, in "Simferopol" also less than 7 million cubic meters instead of 36. Let's face it, this is a real emergency.

Rumors about the introduction of restrictions on the water supply appeared last week. Local residents have already noticed a decrease in pressure at the taps. Now this information has been officially confirmed by the State Unitary Enterprise of the Republic of Kazakhstan "Water of Crimea". Everything will be done in 3 stages. Since August 24, Crimeans will have to say goodbye to hot water, and the volume of cold water supply will also decrease in half of the districts of Simferopol. In a week, from August 31, no water will be supplied at all at night, and during the day it will be carried out according to hourly schedules. The third stage of restrictions will be the most severe. From September 7, water will begin to flow into the taps only in the morning and in the evening, for several hours; in some places, instead of a two-time supply, a one-time supply will be introduced and its time will be reduced. Vladimir Bazhenov, head of the State Unitary Enterprise of the Republic of Kazakhstan "Water of Crimea", explains:

At the third stage, we still plan to supply water to people every morning for at least two hours and every evening for three to four hours ... Although some districts can only have morning water, others can only have evening water.
Good wishes, but not the fact that they will be fulfilled. In addition to water shortages, the peninsula's huge problem is its extremely dilapidated pipeline infrastructure. Even the regional authorities admitted that water losses are 50%. Specialists in the field of housing and communal services of Crimea believe that it can easily not withstand the water hammer, which will be with a constant shutdown and resumption of water supply. Due to local accidents, it will be necessary to turn off entire neighborhoods that will remain without the coveted water, and this can become a mass phenomenon.

All this causes the strongest concern among the inhabitants and guests of the peninsula. Following Simferopol, the resort Alushta, Feodosia, Sudak and Kerch may follow the example of the economy. Crimeans are very irritated by the recommendations of the authorities to switch to the use of disposable tableware so as not to waste water on washing. People quickly bought up all the large plastic containers available in stores for storing it and bottled water.

Attention is drawn to the initiative of local officials to install special water reservoirs in yards, near schools and kindergartens. "Evil tongues" claim that the barrels were bought in advance, and under the terms of the tender they cost the budget several times more than their market value. Doctors warn that it is not worth drinking such water, because in the heat it will bloom quickly, which can lead to intestinal infections.

Once again, I would like to urge the authorities to use the Israeli experience of large-scale desalination of sea water - there is simply no other way for Crimea. This summer, which is coming to an end, the Crimeans will somehow survive, but it is worth thinking about what will happen next year if the winter is again snowless.
Reporterin Yandex News
Reporterin Yandex Zen
12 comments
Information
Dear reader, to leave comments on the publication, you must sign in.