Welcome to Charite: Is Navalny being Prepared for Yushchenko for Russia? 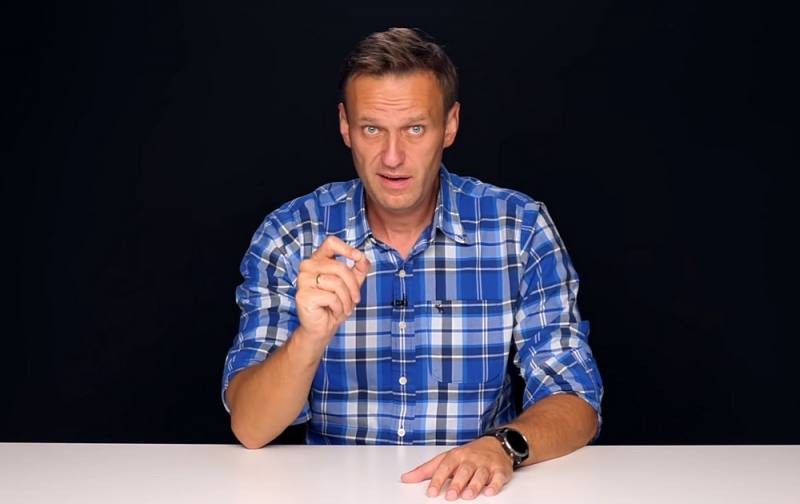 As one would expect, the plot of the action movie “Save opposition leader Navalny” is being unrolled according to all the canons of breathtaking thrillers about the “bloody gebn”, so beloved in the West. Judging by the composition of the "scriptwriters" and "directors" of this production, it is not a cheap third-rate short film that is put into production, but a real blockbuster.


We clearly have to become spectators of a large-scale epic with sequels, prequels and everything that is supposed to be in such cases. Rather, it is even about a series with many seasons. At the same time, there are already so many coincidences with similar "masterpieces" from the masters of the political show business of the West that it is already breathtaking.

The smell of dioxin is in the air again

“The young and principled opposition politician is waging an uncompromising struggle against the rotten, corrupt and stale government. He has every chance of winning a brilliant victory in the upcoming elections if they are held honestly and according to a democratic scenario. Representatives of the ruling elite are aware of this danger and go to extreme measures - they organize the poisoning of their opponent, trying to eliminate him once and for all. Companions policy at the cost of incredible efforts, it is possible to transport it to the Citadel of Good and Light - to the West. There, brilliant doctors of one of the clinics not only save the life of the sufferer, but also announce to the whole world that everything that happened was no coincidence. The beacon of young democracy fell victim to a sinister plan of criminal retrogrades who did not want to part with the power of criminal retrogrades ... "

Stop, stop, stop! Have you decided that all this is about Alexei Navalny and the events of the last days? And here is nothing of the kind! It was I who simply climbed into the closet of the "Color Revolutions Pictures" film company and, rummaging around in the far corner, took one of the folder that had been lying there for more than a decade and a half. He brushed the dust off it and read: “The poisoning of Viktor Yushchenko. 2004, Ukraine ”The quote is from there. No, I agree, they also relate exactly 100% to the events with the unlucky "father of Russian democracy" who unsuccessfully drank tea at the Omsk airport - according to the producers of the above-mentioned creative team, tirelessly directing "Maidana" wherever possible. This fact can testify to two things: either these gentlemen prefer not to spend money on sensible screenwriters, preferring to use the same "canvas", in which only names, dates and geographic points change, or those who come up with plots think stereotypically to the limit - so they cannot invent anything fundamentally new.

The fact that Navalny, who was brought from Russia, was hastily placed not anywhere, but in the Charite clinic, which was already "lit up" in its time in a completely similar scandal, says very, very much. Yes, in fact, and not in one - it was within the walls of this medical institution in 2018 that they “saved” (and, which is typical, again from “poisoning”, yes, yes, yes!) Another domestic “oppositionist” - the infamous Pyotr Verzilov , the founder of "Mediazona", tightly tied with, not be remembered by nightfall, Pussy Riot. Well, by the way, whoever did not get treatment there - Gorbachev, Yeltsin, Shevardnadze, Timoshenko ... Well, that still turns out to be a list. However, we are now only interested in the story in which "the best luminaries of European medicine, founded in the XNUMXth century, one of the oldest clinics in Germany" (this is what Charite advertises in the advertising brochures), with their diagnosis, played a leading role in the political fate of the whole country.

For those who have forgotten, I will refresh, so to speak, the main milestones: on September 5, 2004, presidential candidate Viktor Yushchenko drank either sushi, or fungi, or pilaf, or rich borscht (and, according to trustworthy data, only this together) and the bay of this variety with a whole "bouquet" of alcoholic beverages, suddenly fell ill. The special piquancy of the case was given by the fact that the last point of the gastronomic and alcoholic odyssey made on that day by Viktor Andreevich was the dacha of one of the high-ranking officials of the Security Service of Ukraine - Volodymyr Satsyuk. Well, where the SBU is, there will certainly be spies. Soon there was talk that there was definitely a "Russian trace" in an attempt to wipe out Yushchenko ... However, I am getting ahead of myself. First, it is worth remembering where, by whom exactly and when exactly the version that later became "canonical" about "dioxin poisoning" was voiced.

From “highlighted like” to “we demand a transparent investigation”!

For the first time, the versions about the villainous attempt on the life of Viktor Yushchenko were voiced by the doctors of the Austrian clinic Rudolfinerhaus, where he found himself five days after his own unsuccessful dinner. It turned out again ... Much later it will become known that it was in this clinic in the summer of the same 2004 that the future presidential candidate was injected with some "anti-aging drugs." Most likely, injections were made based on the so-called stem cells. Perhaps these procedures are incompatible with gluttony and excessive "libation". Perhaps something went wrong for a different reason ... For Yushchenko's team and the US curators who initially loomed behind it, the announcement of the true diagnosis was like death. For Rudolfinerhaus, after the photographs of the horribly disfigured Yushchenko that have gone around the world, even more so. As soon as they admit the truth and that's it, they could put out the lights and close the shop.

It was because of this that the Austrian doctors were ready to confirm any diagnosis - except for the present, of course. Consensus, satisfying both sides, was found instantly. But then, as in the well-known anecdote, “he came and vulgarized everything” ... No, not Lieutenant Rzhevsky, but the very chief physician of Rudolfinerhaus, Lothar Winke. This honest and principled physician dared to declare to the whole world: "There was no poisoning at all!" It cost him a lot - he was kicked out of the clinic, he was not allowed to practice. Moreover, Vincke later repeatedly mentioned direct threats that he received personally and his family members. One way or another, but instead of dioxin, the case smelled like "kerosene" and the situation urgently needed to be corrected. This is where Charite came to the rescue. It was there that, allegedly, analyzes were carried out that "fully confirmed" the version that they tried to lime Yushchenko with dioxin. The trouble is that no one can prove whose blood was in the very samples that were tested there. And did they check anything at all ...

Yushchenko categorically did not agree to undergo a second analysis either as the head of the “nezalezhnaya” or afterwards. To this day he refuses. Statements that no one has ever hounded him have already been made almost a million times - including by the ex-president's closest associates. The last of them belongs to the former chief military prosecutor of Ukraine Anatoliy Matios, who quite unequivocally denied even the slightest likelihood of the fact of poisoning. And it was already in 2019 ... And now the Charite doctors are back in business - just yesterday, representatives of the clinic announced that Alexei Navalny had been poisoned with some kind of cholinesterase inhibitors. Sorry for the expression ... In the domestic medical expert community this, if I may say so, "diagnosis" has already been ridiculed, reminding German colleagues that the substances of this group, in fact, are not any kind of poison. The most common medicines, which are often used in the work of resuscitators.

For example, in the case when a person is "removed" from an artificial respiration apparatus - which was done with Navalny. The doctors who treated him in Omsk completely deny the claims of Charite. However, the German (and not only) politicians who have gone into a rage do not care about these medical subtleties. “Intoxication, you say ?! Means, poisoned - and the point! " And now German Foreign Minister Heiko Maas and German Chancellor Angela Merkel are already publishing a joint communique in which they undertake to assert that a crime was committed against “playing an outstanding (?!) Role in the political life of Russia” Alexei Navalny, which must be investigated "Down to the smallest detail and with complete transparency." And those guilty of it were "found and severely punished." You see, they demand this from Russia - as if now autumn is not 2020, but 1941, and Herr Maas is a Gauleiter of the Russian territories captured by the Wehrmacht. Nothing beguiled ?!

Tellingly, the “public opinion” of Germany and the entire “civilized world” began to prepare for just such a development of the situation ahead of time, almost from the second the plane with the priceless cargo in the form of a suffering “oppositionist” landed on German soil. Even then, the official representative of the country's Chancellor, Steffen Seibert, thoughtfully uttered in front of television cameras: "Most likely, we are dealing with a case of poisoning!" By the way, Navalny was received in Germany and transported for some reason not by civilian doctors, but by representatives of the Bundeswehr. And the police, coupled with a very characteristic-looking people in civilian clothes, according to eyewitnesses, there were much more on the airfield than doctors. Tellingly, Charite's regular customers are not only Angela Merkel, but also the current President of Germany, Frank-Walter Steinmeier. After that, can there be any doubt that this medical facility (at least at certain levels) is thoroughly “filtered” by the special services and is in the closest contact with them? I would not ... And in the light of the number of stories with "poisoned oppositionists" this hospital appears - even more so. And somehow this clearly anti-Russian demarche coincided with some others - like the expulsion of our diplomat from Vienna, which happened for the first time in the history of Austrian-Russian relations.

Supported by Charite and no one else, the version of the "dioxin attack" on Viktor Yushchenko, in the opinion of the absolute majority of political scientists, paved the way for this misunderstanding to the imperious "Olympus" of Ukraine, from which he did not even fall four years later, but slipped under the mocking hooting of his own ex fans and ridiculously microscopic ratings. Nevertheless, it was then that the first "Maidan" took place in Kiev and the foundations were laid for the 2014 coup d'etat. Today Navalny's team is jubilant. His lively press secretary Kira Yarmysh broadcasts that "the poisoning is no longer a hypothesis, but a fact", since it is confirmed by "an analysis of independent laboratories." With enthusiasm, really, it is hardly worth rushing. While the "prominent oppositionist" is in an artificial coma, it is not doctors who decide his future fate. You never know what role he will be assigned? Okay, if the "Russian Yushchenko". And if just another "sacred victim of the regime"?

“Why did the hedgehog die? - Yes, I ate too many filthy mushrooms! - And what is it with his face ?! “Yes, you know, I didn’t want to eat…” This is so, instead of an afterword. Sorry for the cynicism.
Reporterin Yandex News
Reporterin Yandex Zen
33 comments
Information
Dear reader, to leave comments on the publication, you must sign in.