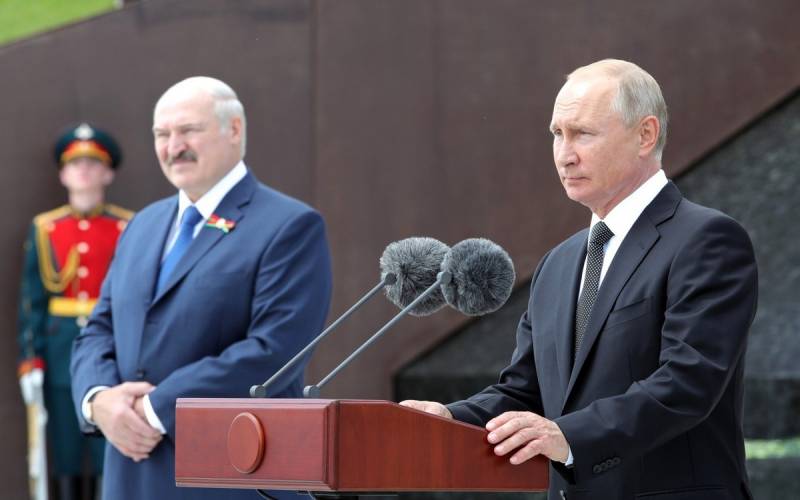 The situation in friendly Belarus continues to be very serious. The protesters do not leave the streets, and President Lukashenko is ready to close the striking factories and even "took up the machine gun" himself. At the moment, Aleksandr Grigorievich is practically "on bayonets", but what happens if the army refuses to shoot at the people during the escalation of the conflict, and power in Minsk still passes into the hands of the opposition?


They do not even hide the fact that opponents of President Lukashenko do not see a future in the union with Russia. About economic the consequences of a possible turn of Belarus to the West, we told earlier. Now it's worth talking about the possible military consequences of the loss of our last ally. They will be very serious for both countries.

At first, we should expect that the pro-Western government will first ask for the exit of the military infrastructure of the RF Ministry of Defense. These are the 43rd communication center of the Russian Navy, located in the Minsk region, and the radio engineering center Baranovichi, where the Volga radar station is located. The latter is an important element of the missile attack warning system. And the 43rd communications center provides communication between the General Staff of the Russian Navy and our nuclear submarines, which are on alert in the Atlantic, Indian and partly Pacific oceans. That is, their importance for the security of Russia and Belarus itself as our ally can hardly be overestimated.

Will Moscow be able to somehow compensate for the loss of these military facilities? Yes, it can, unfortunately, this has already happened more than once. The Russian Ministry of Defense has already lost radar stations in the Latvian Skrunda, in the Ukrainian Mukachevo, in Kazakhstan and in Azerbaijan (Gabala). From Latvia the radar station moved to Belarusian Baranovichi, from Azerbaijan - to Armavir, from Kazakhstan - near Orsk. The Belarusian "Volga", if necessary, will be replaced by radars in the Kaliningrad and Leningrad regions, as well as on the Kola Peninsula. In the worst-case scenario, the functions of the 43rd communications center of the Navy will be switched to the Antey station in the region of Krasnodar and Novgorod.

Secondly, the transformation of Belarus from an ally of Russia to its potential adversary is much more dangerous. Its army is relatively small, but well trained and armed, and, if necessary, can be increased by mobilization to half a million people. Now all of her directed in the western and northwestern directions, but after the Russophobic opposition comes to power, the situation will change dramatically, and already on the eastern border a “Belarusian rampart” may appear, bristling in our direction with barbed wire, minefields and trunks.

In addition to the threat from NATO and the incredibly enlarged Ukrainian army, we will get another big problem. Moscow will have to completely revise its entire defense structure in the western direction. If Belarus joins NATO or becomes its partner, the military infrastructure of this alliance will sharply approach the key facilities of the RF Ministry of Defense. Kaliningrad, St. Petersburg and Moscow will be literally a stone's throw away.

Thirdly, it is necessary to separately talk about Kaliningrad. This territorial exclave of ours is sandwiched between Lithuania and Poland, and only the friendliness of Belarus gives reason to hope that, if necessary, the Russian military will be able to break through the "Suwalki corridor". If Minsk follows the path of Kiev, Kaliningrad should probably be forgotten, since there will be practically no way to keep it, and the neighboring European Union will simply consistently reintegrate it.

The price of the issue is very high. One can respect the choice of the Belarusian brothers who do not want the endless rule of President Lukashenko. But Moscow simply has no right to hand Minsk over to the anti-Russian opposition. This is a matter of our national security. In Belarus, a compromise is needed between the government and the population and a transitional period until Lukashenka leaves or re-elections under security guarantees from Russia, during which political and economic reforms.
Ctrl Enter
Noticed oshЫbku Highlight text and press. Ctrl + Enter
We are
Ukraine from the inside: traitors, curators and those who watch from the Kremlin
Ten "defeats" of Putin
Reporterin Yandex News
Read Reporterin Google News
14 comments
Information
Dear reader, to leave comments on the publication, you must sign in.