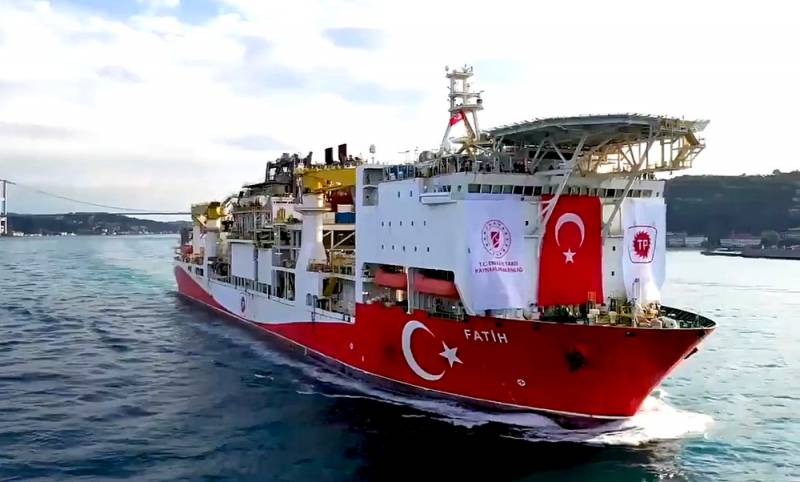 Another very bad one came from Turkey news for Gazprom. According to President Erdogan, literally in 3 years Ankara will not need supplies "from third countries", since it has discovered giant gas fields in the Black Sea. How should you treat such messages?


On the eve, the Turkish president delighted the population of his country with a "historical event":

We have discovered the largest natural gas field in the history of the country in the Black Sea. The volumes are 320 billion cubic meters. We plan to deliver it to our citizens by 2023.
Ankara is rubbing its hands as it has to spend about $ 40 billion every year on imports of this energy carrier. The Turks buy Russian, Iranian, Azerbaijani gas, as well as LNG, which is now very cheap due to the unique market conditions. The emergence of their own large deposits promises big problems for suppliers. We are most interested in Gazprom's positions, which are staggering more and more. Russia supplies gas to Turkey via two pipelines, Blue Stream and Turkish Stream, with volumes falling from year to year. This is influenced by a whole complex of reasons.

At first, this country has been in recession for several years now, the exchange rate of the national currency has dropped by 30%. Added problems to the economy and the coronavirus pandemic. Gas is no longer needed in the previous volumes.

Secondly, because of the same COVID-19, the overall demand for "blue fuel" has dropped worldwide, and because of its surplus, the prices for it have also dropped. It turned out to be even cheaper to buy LNG than to pump gas through a pipe.

Thirdly, if you wish, you can see and political component in reducing the volume of imports from Russia: Ankara is extremely unhappy with the fact that Moscow is on the opposite side in two conflicts at once - in Syria and Libya.

As a result, in 2020 Gazprom dropped to fifth place from the position of the largest supplier to Turkey. Already, some experts say that it is time to stop the Blue Stream and be content with just one thread of the Turkish. However, after the "good news" from President Erdogan, not only the future of Russian gas in the Turkish market becomes questionable, but also the prospect of Ankara becoming a direct competitor to the Kremlin in the southern European market as a new supplier. It is reported that the deposit was discovered in the Black Sea at the Danube-1 site, which is not far from the coast of Romania and Bulgaria. This means that Turkey can theoretically not only cover its internal needs, but also supply gas to these countries, as well as to neighboring Greece.

This is extremely bad news for the domestic monopolist. However, some experts urge not to bury the state corporation ahead of time. They point out that it will be possible to find out for certain the volumes of reserves in discovered fields only after verification by independent auditing companies, and it is still premature to believe Erdogan about 320 billion cubic meters. There are also questions about the profitability of production. The Black Sea shelf is a deep-water one, therefore the commercial operation of such wells is quite expensive, and the produced gas may turn out to be uncompetitive with respect to the same LNG. That is, Turkey will be able to meet its needs, if necessary, but it is too early to talk about export as a successful business.

Finally, attention is drawn to the timing of the “good news”. Turkey is actively advancing in Libya and the Eastern Mediterranean, converting Christian churches into mosques. The "good news" on gas could be part of a publicity campaign to raise the spirits of the people. In addition, a number of contracts with Gazprom will soon expire, and the status of an “energy independent state” will help Ankara in negotiations with Russia and other suppliers regarding further terms.
Reporterin Yandex News
Reporterin Yandex Zen
22 comments
Information
Dear reader, to leave comments on the publication, you must sign in.