Why does the West strongly advise Putin "not to save Lukashenko" 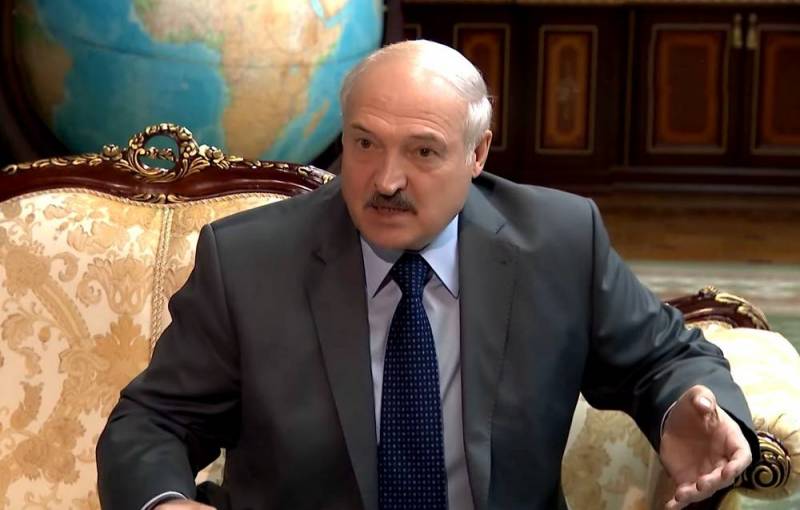 Today, one of the most "painful topics" for the entire "collective West", with a sinking heart following the situation in Belarus, is the fear that Russia will help Alexander Lukashenko, who is desperately trying to keep this country from the "Maidan" chaos. They understand perfectly well that just such a turn of events will most likely be able to "mix the cards" of a special operation unfolding before our eyes called: "Remove the last dictator" ...


All this is served under the guise of "analytical reports" and "expert studies", the authors of which spare no effort to prove "extremely convincingly": at the current stage, the "father" at the head of Belarus, who has fairly compromised himself, is unprofitable for Moscow, and his support is fraught with unacceptable costs. Sounds, at first glance, plausible.

As a reference, so to speak, an example of such creativity, it is quite possible to cite the research of the Council on Foreign Relations research center, which, by the way, is considered the most powerful of all private organizations, which really influences the external policies U.S.A. In an analytical review published in its own press, Foreign Affairs, the local experts cite as many as five reasons, following which the Kremlin should stay as far away from the “toxic” Belarusian leader as possible, and ideally, as they say, “give him up with all his giblets”. Excuse me for the "rough calm", but the meaning of the report is seen just like that. So, what, in the opinion of the American “smart people”, are the reasons for Moscow to betray Minsk?

First, the protests taking place there, according to analysts from the Council on Foreign Relations, are "not at all anti-Russian." The "Maidans" in Kiev were really staged by "Ukrainian nationalists", they admit. And the Belarusian demonstrators are the nicest people who have nothing bad about our country and have no thoughts. Yeah, that's how we believed ... Secondly, the CFR is convinced that "from the suppression of democracy in Belarus" Vladimir Putin will not receive absolutely no "benefit". “The invasion of a neighboring country” (what are you talking about? - author) “will be difficult for him to explain to his own people,” since everyone will immediately see the real reason - “support for falsifications”. Obviously, the "research center" has not heard about such things as national security interests, pursued through the maintenance of stability in neighboring countries. Or they pretend not to hear. Rather, they believe that such a logical course in foreign policy on this planet can only be allowed by the United States.

The third reason why the Kremlin should not help Lukashenka sounds rather strange in the statement of the Americans: “a well-developed popular mobilization of Belarusians”, which “will not allow to extinguish the protests in the bud”. And Russia has something to do with it? And about the "nationality" of desperate attempts to shake the situation in the country, which are already taking place at this stage, there are simply huge doubts. Fourth, as overseas "analysts" assert, "Little Green Men" will not be able to solve Putin's problems. " But what is this for ?! What problems, in fact, are we talking about ?! And what kind of "little men", by the way? Obviously, about those who are already imagining in Minsk or somewhere else there to Ukrainian, Baltic, Polish and other dreamers with a painful fantasy? We have already gone through something similar - just before the elections, when the scandal with the "Wagnerian case" was unleashing. It turned out funny and embarrassing.

However, the fifth reason in the CFR presentation sounds relatively sane. Why would Moscow use “power options” if even “Lukashenka’s political opponents want close ties with Russia” and will not get away from it? Analysts of the Council on Foreign Relations assure that the Russian leader “should use his connections in the Belarusian elite” not to save Alexander Grigorievich, but “to facilitate the transfer of power” in the country. And then, as they warn, "anti-Russian slogans may well appear at the protests in Minsk." Well, yes - as if they were not there quite recently and just in the hands of those people who today are seeking to overthrow Lukashenka. Why all this verbiage becomes very clear if you get acquainted with another of the "studies" published in the American media - performed by the well-known analytical center Atlantic Council. Local experts do not hesitate to explain: "the priority of the West" in relation to the events in Belarus today should be "containment of Putin", and appropriate actions should be "taken in advance" so that the Russian leader "does not think that he can take action." So they undertake - "powder their brains" how much in vain and lie recklessly.

In order to make sure that the absolute majority of the "highly intelligent" postulates quoted above are pure lies, it is enough to recall the real intentions and positions of the same Svetlana Tikhanovskaya, who is today in the eyes of the West "the legitimate head of Belarus" and, so to speak, actively "passing the test "For the role of" Belarusian Juan Guaido ". Yes, now all the representatives of the temporarily quieted "opposition", having obviously received the appropriate strict instructions from their curators, have sharply "tightened" the degree of Russophobia in their own statements. Take, for example, the widely circulated statements of such odious figures as “a member of the coordination council for the transfer of power in Belarus”, the former minister of culture Pavel Latushko there, and one of Tikhanovskaya’s closest associates, “a member of the joint opposition headquarters” Maria Kolesnikova. These two are almost like nightingales that they do not even think to break off relations with our country, moreover, they firmly intend to “develop them in a constructive manner” without leaving any interstate agreements and structures. Kolesnikova even openly brings down "the recent tensions and problems" in relations between Minsk and Moscow on Lukashenko, who "is not coping with the task." And they, the "new" ones, will be Russia's best friends and most reliable partners! A fresh tradition ... All of this is too contrary to the extremely Russophobic program of the "united opposition" of Belarus, which it presented literally until recently on the reformby.com resource in the form of a "Reform project for a single presidential candidate from supporters of change and independent experts." Now this source, which caused quite natural negative emotions (and not only in Russia, but also among sane Belarusians, too), was quickly "cleaned up" - the site is inaccessible, and the materials mentioned are available exclusively in the Google cache.

Nevertheless, the “program” and, in particular, its section dealing with the issues of “reforming the national security” of Belarus, was quoted so much and often that it is already possible to draw certain conclusions about the views and mindsets of its authors and leaders of the protest movement. I will not go into all the details, but even with a rather cursory acquaintance with the intentions set forth by the "oppositionists" regarding the future of Belarus, one gets the full impression that all this was written on the Kiev "Maidan" in 2014, and literally as a carbon copy.

Here you have both "the aggressive policy of the Kremlin that threatens the Belarusian people", and "the vital need to withdraw from all integration projects and associations with Russia", and even "the use of the idea of ​​the" Russian world "for Moscow's domination over Minsk." The Ukrainian "Maidan" and calls for "comprehensive decommunization and de-Sovietization of Belarus", proposals to be sent to jail for "denying the separateness of the Belarusian nation" and "insulting" the national language and other "shrines" are given a mile away. Well, and "the cherry on the cake" - the idea of ​​"creating the Belarusian Autocephalous Church." Poroshenko's "tomosyatina" in all its vile "glory" ... After that, calls to throw out of Belarus not only every single Russian military base, but also various "threats to national security", including cultural "pro-Russian organizations "look just wonderfully natural. As well as the statements that the main thing for the Belarusian army is to join NATO and “speak exclusively in the national language”. The banning of our TV channels, the deprivation of the Russian language as a second state language, the termination of purchases of Russian energy resources with an accompanying transition to American LNG ... All this is definitely a broad and deep program of "development of constructive and partnership relations with Russia." Yeah ...

Trying to promote ideas that the forces rushing to power in Belarus today “are not anti-Russian” and do not pose a direct threat to the most important interests and national security of our country, the speakers of the West openly demonstrate that they hold all of us for, sorry, complete idiots. First of all, the leadership of our state. “To save” and support with all available forces and means, whether the West likes it or not, Russia today should not Lukashenka as much as the brotherly Belarusian people. Well, and defend their own vital interests, respectively. Allowing in the last, in fact, friendly post-Soviet republic, the coming to power of types who sincerely believe that one of its main problems is "the dominance of all Russian - language, culture, Church", our country will tolerate a colossal foreign policy, ideological, and, I would said civilizational fiasco. This, at least, will put a final cross on the idea of ​​a "Russian world", which, as they say, will definitely not be subject to restoration after such a blow. Who in general will reckon with a "great power" incapable of supporting its closest allies and controlling the situation in its critically important near abroad? Nobody ever. Having surrendered Minsk, Moscow will surrender itself ...

And this is not to mention the multitude of other problems arising from the possible "change of course" of Belarus, which, again, are directly related to our national security. It's not even about the notorious NATO bases "over the fence" (although they will appear there very quickly - be sure to be trustworthy), but something else. At least - about wheeled chassis for missile systems of the Strategic Missile Forces of the Armed Forces of Russia, which today are manufactured only and exclusively at the Minsk Wheel Tractor Plant. Alas, there is no alternative to them yet. This enterprise, like all the others, according to the plans of Mrs. Tikhanovskaya and all her associates, whoever of them would eventually get to the supreme power, is intended for privatization. Here are just Russian companies to such a local "zmagars", if they won, God forbid, the upper hand, they will not let even a cannon shot - whatever they weave about "cooperation" today. Lulling Moscow with assurances of the "non-danger" of what is happening in Belarus, demanding that our country "not interfere in what is happening", no matter what is happening in Minsk (a similar appeal was made yesterday by the American presidential candidate Joe Biden), the West is trying to inflict another geopolitical defeat. A defeat that can be truly fatal for her.
Ctrl Enter
Noticed oshЫbku Highlight text and press. Ctrl + Enter
We are
Ukraine from the inside: traitors, curators and those who watch from the Kremlin
Ten "defeats" of Putin
Reporterin Yandex News
Read Reporterin Google News
8 comments
Information
Dear reader, to leave comments on the publication, you must sign in.