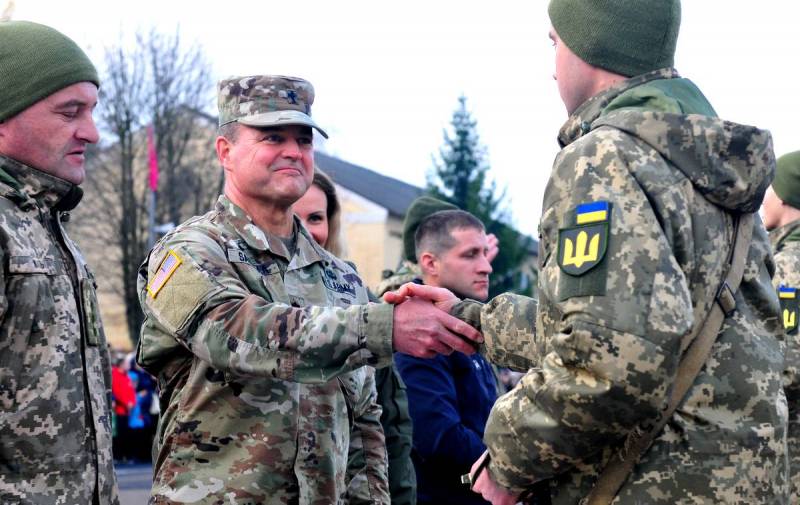 At a time when the attention of the domestic public, the media and politicians it turned out to be tightly chained to the increasingly dramatic events in Belarus, the threat to the Russian borders crept up, as the famous idol of pioneers wrote “from where they did not expect” ...


In Ukraine, events are taking place without much publicity, which may well have very unpleasant consequences for our country. Judging by the information coming from the "nezalezhny" information, it is from the status of a permanent, but relatively independent (at least outwardly) outpost for conducting subversive actions against Russia, it is finally turning into a structural unit of the American "power" departments, directly led by representatives of the US army and special services.

In addition, the supply of the Ukrainian army with weapons and technique NATO standards, and already far from overwhelmed and decommissioned samples of such, but quite modern units. Such movements are not done just like that.

Will we not let Kiev join NATO? He doesn't need to go there anymore ...

Finally, it should be admitted that all the conversations of our politicians and statesmen about the "inadmissibility of the North Atlantic Alliance's offensive to the East" in general and the categorical unacceptability for Moscow of drawing Ukraine specifically into this military-political bloc, unfortunately, remained just empty words. However, it was hardly worth expecting otherwise, given what the maximum "opposition" of the Russian authorities amounted to to the transformation of the former fraternal republic (which began, let's face it, long before the "Maidan") into a part of the Western military structure, by definition directed against Russia. “Expressions of deep concern”, “strict warnings about possible consequences” and the like, which in reality do not mean anything that no one in the West or Ukraine has paid attention to for a long time.

Time after time Moscow sounded "sobering" words that "Ukraine will not be accepted into NATO," and all the promises and advances given to it by the North Atlanticists are a hoax. The most interesting thing is that these statements are holy truth! But it doesn't make it easier for anyone. Not being formally a member of the Alliance, the “non-foreign” de facto has already become not just a part of it, but the most active vanguard on the anti-Russian “front”. For example, this year the Ukrainian Armed Forces underwent a reorganization of command structures according to the NATO J-structure (from the term Joint, that is, united). Empty bragging, mindless monkeying, cargo cult? And here is nothing of the kind. Tortured with local violent aborigines, from whom nothing worthwhile can be achieved, no matter how much they drill and arm, the American commanders and curators decided to go the only remaining way - to lead everything personally.

Apparently, in the very near future, Washington is literally going to "transfer to manual control" of the Ukrainian army and special services. And consequently - and all the "non-profit", in the eyes of strategists from the United States is only an optional supplement to the "cannon fodder" supplied by it. This statement is not speculation at all, and not even speculation. With more than one hundred percent accuracy, they are confirmed by the facts that I intend to announce below.

So: already in October of this year (there is no doubt, regardless of the pre-election and post-election passions in the United States itself), deliveries of special-purpose IT equipment from overseas will begin to Kiev, intended not only for the local Ministry of Defense, but also for all other significant military installations of the country. What attracts attention in this information first of all? The US company Mission Support and Test Services, LLC (MSTS), known for its extensive experience in creating ultra-secure computer networks, will supply and install the entire complex of computer network equipment - from the main servers to the last switching device. The most interesting thing is that this company is only a subcontractor. The customer is the US Department of Energy's National Nuclear Safety Administration. It would seem - through and through a peaceful government body, but only those who are completely unaware of the true structure and tasks of this department can think so. Intelligence and counterintelligence departments were created in this "office" at the time of its formation and are flourishing to this day. Also, the US Department of Energy has full responsibility for the development and production of nuclear weapons. In general - the Pentagon, only energy.

Are you ready for a war with Russia?

The question arises: for what, excuse me, devil the American Ministry of Energy suddenly needed not only to install network equipment with the highest level of security in the "non-leased" network, but to do it for the local warriors? It is also understandable if the object of concern for US power engineers were the Chernobyl nuclear power plant, which is notorious to the whole world, or other Ukrainian nuclear power plants, which are, to be honest, in an alarmingly deplorable state. However, this is absolutely not the case - in the tender announced by MSTS, the purpose of which is to find direct performers for the work described above, not Pripyat, but Kiev, is named as the main venue for them, and in addition to it, “various institutions and facilities of the Ministry of Defense located throughout Ukrainian territory ". Moreover, potential job seekers who have Ukrainian citizenship must certainly have "admission to any military facility" in their country. The American specialists involved in the project must have a military secret clearance that corresponds to the NATO SECRET classification. In fact, the highest level, more serious than which in the Alliance is only COSMIC TOP SECRET, revered by some experts for pure fantasy.

Moreover, the documents published on the official websites of the relevant departments indicate in black and white: the purpose of the planned work is to expand the special command computer network of the Armed Forces of Ukraine. Strange, isn't it? The "nezalezhnoy" army does not have a single nuclear weapon, even the most overwhelmed one. What does the US National Nuclear Security Administration have to do with it ?! There may be several answers. Firstly, this structure, as far as is known, is very seriously concerned with the topic of military action in cyberspace. According to official data, it repels hacker attacks hostile to the USA. But this is according to the official ... The espionage activities of the NSNS, as a matter of fact, have never been particularly hidden or denied. So much for your reasons ...

However, things can be even easier. In the United States, with an abundance of various "power" structures, which often "overlap" or even completely duplicate each other's functions, military tasks may not necessarily be solved by people on the Pentagon staff. Apparently, Washington drew far-reaching conclusions from the events of August 2008, when the entire command system in the Georgian army collapsed in a matter of days and came to such a bedlam, to put it mildly, that its “valiant” soldiers ran away at the sight of their own tanks. Considering who exactly the United States is, apparently, is determined to incite Ukraine, taking its armed forces under full control of its own is a more than logical decision.

Now, according to the estimates of American (and not only) military experts in the Armed Forces of Ukraine, complete "confusion and vacillation" reign in this area, as they say, from top to bottom, from the highest headquarters structures to field units. There can be not the slightest doubt that the "threads" from the military computer networks spread across Ukraine will stretch to the United States, to the true commanders and chiefs. Hence the conclusions are extremely disappointing. Too many facts, even each on its own, and even more so, combined together, indicate that the overseas masters have embarked on a course of forced preparation of Ukraine for a military conflict. Judging by the level of events being held, we are not even talking about an impending attempt to "de-occupy" Donbass. The stakes are much more serious.

I will give another example on the topic - during the exercises conducted under the strict guidance of American instructors (available now in almost every significant unit of the Armed Forces of Ukraine) in the south of Ukraine, in the Nikolaev region, not only army units were involved, but also significant forces of border guards and employees of the National Guard. Naturally, they practiced "repelling the Russian landing", doing it in a suspicious and dangerous proximity to the borders of the Crimea. This suggests that not only the Armed Forces of Ukraine are aiming at a military confrontation with our country, but, in fact, every single “power” structure is “non-profit”. They are not going to waste time on trifles, heading for a total meat grinder. There is no need to even talk about the supply of weapons and equipment. Not so long ago, the Ukrainian Ministry of Defense reported that it was "fully provided with the necessary ammunition", primarily due to more than generous supplies from abroad. You can be as funny as you want about Kiev getting the status of a partner of the North Atlantic Alliance with expanded capabilities, but do not forget that it, for example, makes it possible to use the potential of the NATO Logistics and Procurement Support Agency (NSPA) for military procurement, which Ukraine is using with might and main. And this is in addition to direct supplies of weapons from the United States, for example, the same FGM-148E - the latest modification of ammunition for the Javelin ATGM. Next in line are modern boats, anti-ship missiles and God knows what else.

It is time for the official representatives of Russia to stop using their wit, arguing that "Ukraine will get nothing from cooperation with NATO." “If he gets it, he won’t get it ...” Let Kiev have a headache for that! What difference does it make to us whether the "non-taxable" will be officially listed in NATO or not, if its army and special services are already completely controlled by the military leadership of the bloc, are absolutely under its control? If the local General Staff is ready to carry out absolutely any order, even suicidal, coming from "senior partners from the West" and do not even think to disobey it? It's not about formal membership ...

Moscow should realize that Russia has literally close at hand the full-scale military infrastructure of the North Atlantic Alliance, and, above all, the United States. Not just infrastructure, but a blade aimed specifically at its heart. Even if not too sharp, jagged and rusty in places, but at the same time carrying a very real danger. Moreover, if these weapons are directed directly by the hand of American generals.
Ctrl Enter
Noticed oshЫbku Highlight text and press. Ctrl + Enter
We are
Wars on distant approaches: Russia has already begun to act
Ten "defeats" of Putin
Reporterin Yandex News
Read Reporterin Google News
25 comments
Information
Dear reader, to leave comments on the publication, you must sign in.