Maidan in Belarus: opposition has three paths, Lukashenko has only one 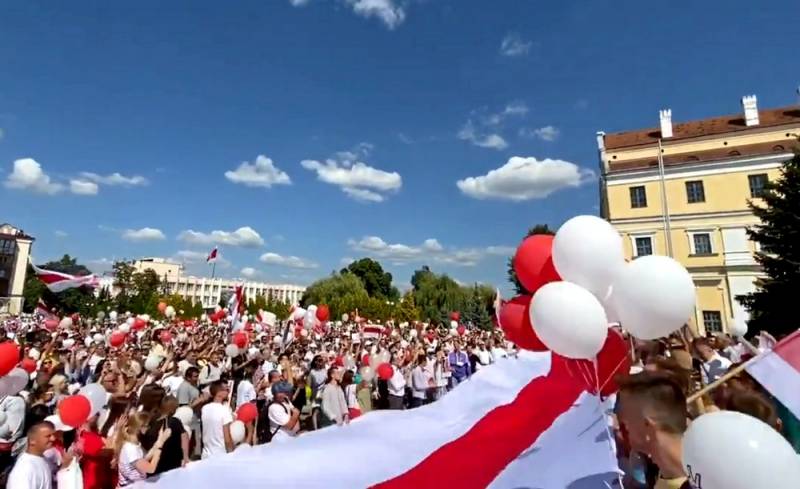 The past weekend, marked by new mass actions both in Minsk and in other Belarusian cities, clearly demonstrated two key points. First, the protest against the incumbent president, fortunately, lost its extreme aggressiveness and passed into a different, non-violent phase, with completely different tactical and strategic decisions of its participants and “puppeteers”. Secondly, it became finally clear to everyone: nothing ended.


Just “turn the page”, forget everything that happened and live on as if there were no several tragic days and nights with street carnage, violence and brutality on both sides, will not work. The parties to the outbreak of civil conflict are only accumulating forces, regrouping them and making new plans for further action. The main directions along which events in Belarus may develop are clearly visible already now.

"Maidan" to choose from

It is clear that for some time the opposing sides will still be able to remain in the unstable equilibrium in which they are today. However, each of the "camps" of this conflict has more than clear reasons not to drag out the "plot", but to try to tip the scales to their side as soon as possible. For the president and the rest of the vertical of power, the further continuation of the protests is fraught with both image and purely economic losses - in the event that the "opposition" still succeeds in inciting at least some serious industrial enterprises to stop their work. The economy of Belarus is already in a far from brilliant state, and the wave of strikes, if any, may even become its notorious "last straw". At the same time, naturally, any negative tendencies in this area, which affect a sufficiently large number of citizens of the country, will play into the hands of protesters and may lead to an increase in the number of their supporters.

On the other hand, many Belarusians, who today still perceive protest actions as an excuse to “hang out” in a pleasant company against the backdrop of fine weather, may eventually realize all the potential “disadvantages” of such a pastime. What now seems like an interesting, new, invigorating and exciting adventure, in which there is something from eating the "forbidden fruit", then it will just get boring. Yes, and the weather will deteriorate sooner or later ... Mass demonstrations that have lost today radical notes risk thus spilling out into indistinct and good-natured "festivities", which the authorities will either stop by a willful decision without much use of force, or, what good, take control ... Consequently, the current pause is nothing more than an "intermission" between the first and second chapters of the play, the ending of which is being attempted by several "scriptwriters" at once.

The ways of developing the situation acceptable for Lukashenka's opponents can, albeit rather conditionally, be divided into three main ones. Let us conditionally designate the first as the “Ukrainian” scenario: maximum radicalization of the protests, a violent confrontation with law enforcement officers, which will certainly lead to casualties on both sides, the seizure of administrative buildings in the capital and other cities. In short, a coup d'etat in all its "glory" that we saw in Kiev in 2014. Nevertheless, just this, the most straightforward (and, let us note, the most suitable for the West, where they are already molding a “bloody dictator” out of Lukashenka) is the least likely option today. The point here, first of all, is that by acting aggressively, trying to seize something, the protesters will give the president grounds for retaliatory measures, which in their harshness can surpass those that have already been taken in previous days. Ukraine was ruined by not too soft or unprofessional actions of the militia - its employees, and, above all, the Berkut fighters were ready (and had the full opportunity) to put an end to the local “Maidan”, and more than once.

Everything was ruined by the cowardice and indecision of Viktor Yanukovych and other representatives of the supreme power, who were afraid to use force until the last moment and literally knocked the defenders of the constitutional order hand and foot. He has already proved that in the case of Aleksandr Grigorievich the "Maidan workers" cannot count on anything like that. What is extremely important - at a rally of his own supporters held in Minsk on Sunday, the President unambiguously promised "not to give up the guys", one might say, he swore in public. There were no "organizational conclusions" regarding the riot policemen or the leadership of the Ministry of Internal Affairs, whose blood the crowd was demanding. Apparently, it will not follow in the future. No, the "Ukrainian option" is unlikely today.

The second path that the anti-Lukashenka "opposition" can (and, apparently, is striving for) to take, has the most analogies with the events of 2018 in Armenia. There, too, from time to time clashes with the police broke out, tear gas poured and truncheons “walked”. There were detainees, arrested, traumatized. However, the main weapon that led the protesters there to victory were numerous non-violent actions aimed at blocking government buildings and institutions, blocking streets and roads. It was by these methods - by almost completely paralyzing the transport movement in the country, and, above all, in its capital, destabilizing the activities of the most important government ministries and departments - that the opposition achieved its goal. All this confusion lasted for more than a month and ultimately the power surrendered ... In Belarus, they want to add to the above methods a massive strike movement, which, as I have already indicated above, will be a serious challenge for Minsk.

Okay, some insignificant factories or factories, but if they stop, for example, BelAZ, MAZ or Belaruskali, little, as they say, will not seem to anyone. But this is unlikely to happen. Let's not forget that all large enterprises in Belarus are state-owned. Lukashenka has already quite openly warned those wishing to strike that they are unlikely to return to their jobs later. According to him, the states are already "bloated", and the reduction of some "flagships of the national economy" will only benefit. And in general - the strike of employees of state enterprises against "dad" is "mice against cheese" in the most classic version. There will be no him - and very soon all the industrial giants there, at best, will change their owners to foreign ones. In the most likely case, they will simply be stopped and turn into ruins and piles of scrap metal. Ukraine is a great example of this.

Another factor that works against the “strike-blocking” option in Belarus is the absence in the country (in contrast to Armenia) of real opposition parties with an already existing structure and clear leaders. The trade unions, as the rally in support of the president that took place on August 16 near the walls of the Government House on Independence Square in Minsk showed, are just on his side - for the reasons I mentioned above. The protest movement will definitely not be able to rely on them. Based on all these realities, the most likely scenario for the further development of the situation may be, relatively speaking, "Venezuelan". Apparently, this is the way to go - at least if the data that Svetlana Tikhanovskaya, who is currently in Lithuania, intends to declare herself "the new president of Belarus" without the slightest twinge of conscience. Antics of this scale are by no means done without the consent of the West, which will thus receive a "legitimate alternative" to Alexander Grigorievich and begin to threaten him, issue ultimatums, impose extremely tough sanctions, demanding voluntarily relinquish power. Or, at least, arrange "re-elections" with a predictable result in advance.

Thus, already at the initial stage, two "parallel" Belarus will be created, each living in its own reality - each with its own president, with its own flag and vision of the country's future. As you know, the process of multiple personality disorder in medicine has a clear name: "schizophrenia", and is considered one of the most dangerous mental illnesses. For the whole country, such quirks do not bode well anyway. Peaceful processions and pickets of girls with flowers will sooner or later be replaced by burning tires and monsters with Molotov cocktails in their paws ... We have already passed all this in Ukraine, and not so long ago.

The only "antidote" against all the troubles described above, the only real path that Alexander Lukashenko himself and the entire official Minsk must follow right now is the maximum rapprochement with Russia, forced integration within the Union State. And as a result of these - receiving from Moscow one hundred percent guarantees of protection and assistance not only in the event of external aggression, but also in the event of an internal conflict in the country, which has clear signs of an attempt to violently overthrow the constitutional power, or, simply put, a coup d'etat. As a matter of fact, very quickly "reforged" back into the most pro-Russian policy in the world, Alexander Grigorievich has already stated that Vladimir Putin personally promised him "to provide assistance in the event of a military threat at the first request."

The Kremlin, which is typical, did not comment on this passage in any way. Well, actually, it would be stupid ... To instantly start pouring assurances, like "For the" father "we will tear everyone!", After some things that this figure uttered to the public in the most recent past, it would be a manifestation of disrespect for to ourselves. It is enough for the time being that Putin was one of the first to congratulate Aleksandr Grigorievich on his "re-election" with which he made it clear enough: "this one is ours." So far, ours ... Further - on the specific results, which, it should be noted, are still quite positive. As for the "entry of Russian troops into the territory of Belarus", which has already been approached by many hysterical "prophets" in Ukraine, Poland and the Baltic states, if such a scenario is realized, there will simply be no need for it. Having regained the status of Russia's closest ally, Minsk will in fact return to the position in which the West did not even try to really shake the situation in it, knowing full well the futility of such adventures.

Naturally, after August 2020, Belarus will no longer be the same as before. Gathering yesterday and showing the world his very real supporters, Lukashenka showed that talk about 0% or 3% of his electoral support is still a lie. 80% also look rather doubtful, however, to keep the country from collapse not by force, but by his own authority and wisdom, Alexander Grigorievich, who ruled Belarus for 26 previous years, is still quite capable. It is only important to show this very wisdom in full - while there is still time for this ...
Reporterin Yandex News
Reporterin Yandex Zen
8 comments
Information
Dear reader, to leave comments on the publication, you must sign in.