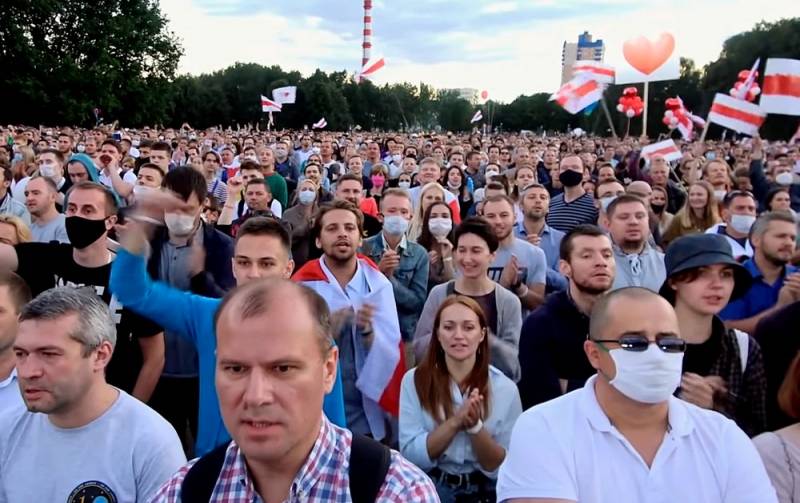 The situation in Belarus has attracted the closest attention from all its neighbors, from Russia to the countries of the European Union, as well as the distant United States. Given some similarities between the style of government of presidents Lukashenko and Putin, it is even suggested that Belarus 2020 is a rehearsal for Russia 2024, when it will be decided whether Vladimir Vladimirovich will use his “wonderful zeroing”.


Alexander Lukashenko has been in power for more than a quarter of a century, and Vladimir Putin has been in power for two decades, with a conditional pause for a four-year "swap". The turnout in the presidential elections in Belarus was 84%, with just over 80% voting for "candidate number one". In the previous elections in Russia in 2018, the turnout was almost 67%; almost 77% of those who came to the polls voted for Putin. Brilliant victories.

Unfortunately, not everyone in the fraternal republic was in agreement with the final count. The main rival of Alexander Grigorievich Svetlana Tihanovskaya declared herself the winner, but prudently chose to leave for neighboring Lithuania. Tens of thousands of outraged citizens took to the streets, accusing the authorities of falsifications. There is an opinion that the Belarusian "wizards" could "conjure" in favor of the current head of state during the early voting period. It is this fact that allows us to draw certain parallels with Belarus. In our country, after a “fantastic” vote on amendments to the Constitution of the Russian Federation, it was decided to extend the process of expressing will in the next elections for three days. Ahead is the struggle for seats in the State Duma, and in 2024 - for the post of head of state. In four years, Vladimir Putin will decide whether he and his team will stay with us for another 12 years, until 2036.

This decision will clearly not be easy for him, since it will be taken in conditions of complex socialeconomic setting. The export of hydrocarbons, which is the cornerstone of the modern Russian economy, is under increasing pressure. The fact that not everything is all right in the regions is clearly evidenced by the situation in Khabarovsk, where mass protests have not ceased for a month now. Undoubtedly, the Kremlin is watching with great interest how Minsk is getting out of the situation.

We must pay tribute to President Lukashenko: he drew conclusions from the sad example of his colleague Yanukovych, and now the Belarusian security forces are harshly chasing “children”. Apparently, the Maidan will not work in Belarus. But only is what is happening "Maidan" in the Ukrainian sense of the word? There are opposite points of view on this matter.

On the one hand, Minsk accuses of interfering with political process external forces: Poland, and the Czech Republic, and Russia, and even Ukraine. Indeed, there are many foreign NGOs operating in Belarus. From neighboring countries, all kinds of opposition bloggers and activists of the Ukrainian Maidan give their advice to protesters via the Internet. There are calls to start a general strike, security officials are asked to side with the people.

Unlike Kiev, no tent camps were allowed to be created in Minsk, so protests are held in many Belarusian cities, where they are rather harshly suppressed. This technology the coup d'état has already been dubbed the "Buling Maidan" for its networked, distributed nature. Can you see the "hand of the West" behind what is happening? Yes, if you wish, you can, especially since there are motives, about which we are in detail told earlier.

On the other hand, there is an opinion that the events are primarily due to the internal political and economic problems of Belarus itself. The standard of living of the population, in general, is falling due to low wages and a shortage of jobs in regions far from the capital. Anna Krasulina, press secretary of Svetlana Tikhanovskaya who fled to Lithuania, explains:

The vast majority of the Belarusian people are behind these protests. We hope that within our power there will be a couple of people who are able to realize this. Realize that the current government has exhausted itself.

The Belarusians, who have grown tired of Alexander Lukashenko for a quarter of a century, associate hope for changes with his departure. Whether these hopes will be justified is another question. It is not a fact that the new political and economic course of Tikhanovskaya will ultimately please them, in Ukraine, too, are gradually beginning to understand that they have missed their "Euro-association". Nevertheless, the call for change is clearly overdue, as evidenced by the massive protests. But the problem lies in the fact that the regime of sole power requires the “cleansing” of the political field from any adequate opponent, therefore only “inadequate” ones remain, when many people are ready to protest vote for anyone, but not for “candidate number one”.

Yes, protesters can be dispersed by force; But if a really significant part of the country's population no longer digests its "national leader", then his rule gradually begins to turn into sitting on a powder keg, which can burst at any moment if someone's hand brings a fuse to the wick. It is still necessary to be able to leave beautifully and on time, leaving behind not an overheated "steam boiler", but a developed, balanced political system, which makes it possible to transfer power without blood and guarantee the consistent development of the country.

It remains to be hoped that the correct conclusions will be drawn from the situation in post-election Belarus.
Reporterin Yandex News
Reporterin Yandex Zen
24 comments
Information
Dear reader, to leave comments on the publication, you must sign in.