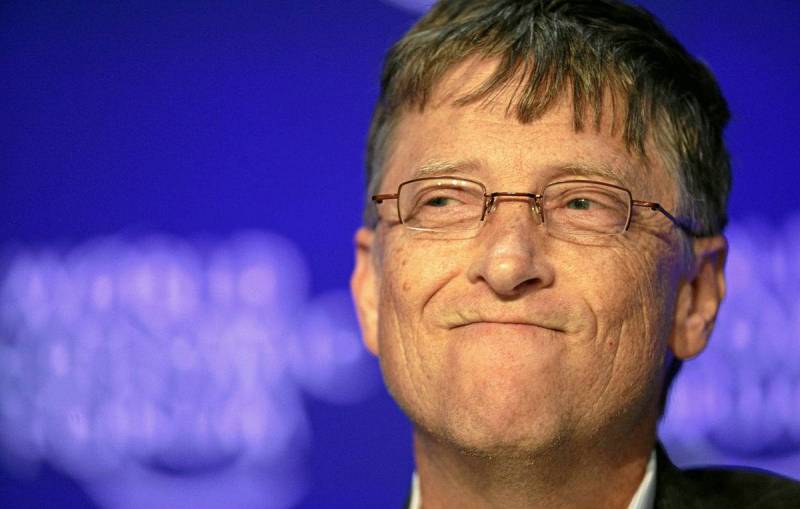 Russia was the first to register a vaccine against COVID-19, which has become a real scourge of the world economics... According to President Putin, one of his daughters personally took part in testing a medicine. Two dozen states have pre-ordered a total of about 1 billion doses of the vaccine. And then, like the devil out of the snuff box, Bill Gates jumped out, criticizing the "wrong" Russian and promising Chinese vaccines.


The famous businessman, one of the richest people in the world, Gates was the first to be written by conspiracy theorists as the creator of the coronavirus. COVID-19 arrived too early, crashing China's rival economy. It is too convenient, by blaming Donald Trump for the pandemic, to shake the president's position on the eve of the autumn elections, giving a chance for revenge to the "globalists", one of whose brightest representatives is Bill Gates. The billionaire himself, who owns shares in the largest pharmaceutical corporations, can earn too much on the coronavirus medicine. All these arguments we detail disassembled earlier.

Let's face it, no one could prove the guilt of Mr. Gates in organizing such an emergency on a planetary scale. It is possible that this is just a coincidence, As they say, money to money. But the American billionaire again gave a reason to talk about himself in connection with the pandemic and the vaccine. He gave a long interview to Wired magazine, after reading which serious questions again arise for the businessman. We will try to isolate the most curious theses from this text.

At firstBill Gates harshly "rode" over President Trump, whom he actually blamed for the failure of the fight against COVID-19, and called the tests used during it "rubbish." He quotes the highlights of his interactions with scientists Francis Collins and Anthony Fauci:

Look, Trump told you you have to sit and listen, so just shut up and listen.
If the billionaire is to be believed, there are rare fools in the US government health care structures, and only an effective private medical corporation is able to quickly respond to a challenge. Gates also claims that the authorities imposed a travel ban too late and prohibited people from taking tests. Such is the "run over" on the Republicans by the "globalists" on the eve of the elections.
Secondly, Mr. Gates also "rode" across Russia and China, where the vaccine is being developed. The businessman skillfully intimidates their potential buyers:

I bet there will be some vaccines soon that will be available to a large number of patients without full regulatory review. We will probably need three or four months in the third phase of trials just to determine the side effects.
Well it is clear. In Western mythology, only American and European corporations that have joined them are capable of producing quality medicines. Therefore, it is necessary to quickly expel Russia, with its potential billion doses, and China from the market by any means.

Thirdly, it will be extremely curious to know that vaccines from Bill Gates will be different for rich and poor. For wealthy inhabitants of the planet, he offers products from corporations Gilead Sciences, Pfizer, Monsanto and Novartis, the shares of which he owns. At the same time, it is immediately honestly stipulated that the pleasure will not be cheap:

But they will not be a cheap and large-scale solution for the whole world. Here I would pay attention to the development of AstraZeneca or Johnson & Johnson.
By the way, the Billionaire Fund has long and closely cooperated with the British AstraZeneca. Vaccines from these corporations will go poorer in the country. That is, the population of the planet, with the light hand of Mr. Gates, is a priori divided into those worthy of an expensive vaccine and everyone else. But what about his philanthropy? To this should be added the idea that he had previously put forward that the fact of vaccination will need to be confirmed by chipping. So people will be reliably divided into those who got injected with the "correct" vaccine and others.

It is quite remarkable that everything described above fits well into the "Scenarios of the Future" from the Rockefeller Foundation, about which we are in detail told earlier. The question remains, would you like to live in such a world according to the recipes of the "globalists"?
Ctrl Enter
Noticed oshЫbku Highlight text and press. Ctrl + Enter
We are
Why is the coronavirus vaccine being developed in a top-secret environment?
Legendary miner Alexei Stakhanov: why do liberals hate him so much?
Reporterin Yandex News
Read Reporterin Google News
44 comments
Information
Dear reader, to leave comments on the publication, you must sign in.