Why Kiev is categorically unprofitable "Maidan" in Minsk 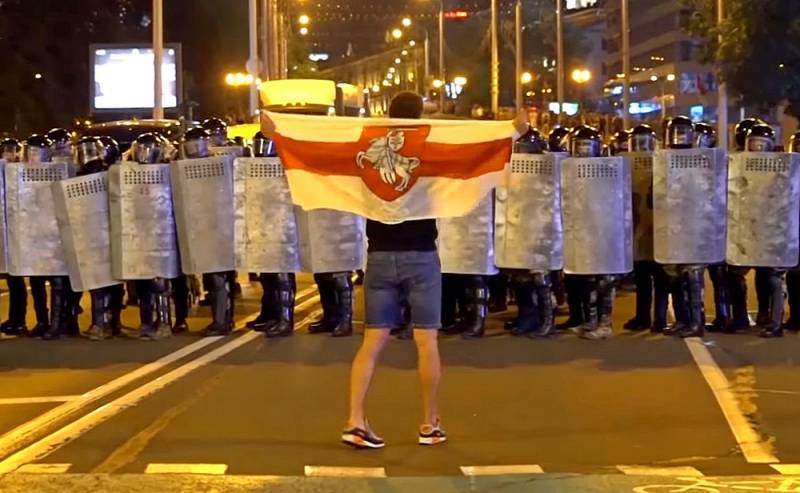 In the domestic information space, the version that the sensational arrest in Belarus of 33 Russians - employees of a private security company, which caused a serious international scandal and an avalanche of accusations against our country by Alexander Lukashenko himself - is being actively and widely "untwisted" is nothing more than a provocation of the Ukrainian special services with ambitious goals. I do not intend to argue with this statement as such.


Most likely, the SBU (as well as their overseas colleagues and curators) really could not do without. It is another matter that some people, on the basis of this information, have already begun to draw conclusions that the Ukrainian authorities are asleep and see how it is to overthrow the Belarusian president, and start a mess in the country, so to speak, in the image and likeness of their own “revolution”. sorry for the expression, "guiding". But this is already fundamentally wrong conclusions! Let's try to figure it out - for what reasons.

The fact that official Kiev is not at all interested in “Belomaidan,” as it has already been called in some media, and is not at all going to defend it at least in the plane of public statements, is perfectly demonstrated by the rhetoric of the President of Ukraine. Generally speaking, Zelensky in this case once again showed his own political mediocrity and incompetence, manifested by him at every step, both in internal and external matters. In fact, there were two decent options here: either openly congratulate a neighbor colleague, as the leaders of Russia, China, Kazakhstan and many other "post-Soviet" countries did, or it would be prudent to keep silent, not to ask for trouble. But no! The showman who has burst into the presidency cannot remain silent in any way. In the end, something completely unintelligible, half-hearted and ambiguous sounded from his lips. This figure, after a thoughtful phrase that “Kiev is not indifferent to the events in Belarus”, began to mumble something about a situation in which “not everyone in the country agrees with the primary elections”. Well, yes - "not just everything" ...

We have already heard this from another "beacon of Ukrainian politics." That a boxer, that a clown - the level is about the same ... Then Zelensky (it is not clear by what right) began to issue Minsk "valuable instructions" and recommendations: "to conduct the most open dialogue" with the opposition, "during which to honestly discuss the formats and ways of further public interaction ". With whom? With those who throw Molotov cocktails at the riot police? In conclusion, the Ukrainian president began to "fumble" at all according to a cheat sheet that was clearly not written by him (and, most likely, not in Kiev), convincing Lukashenko to "fully ensure his people 's rights and freedoms", while adhering to generally recognized civilized democratic standards " ...

If you consider who exactly all this nonsense is addressed to, it turns out very funny. And just plain stupid. Besides, this talk is just about nothing. Zelenskiy does not actually support either Lukashenko or his political opponents. And the point here is not at all in the primordial tradition of true Ukrainians to always try to please "ours and yours", adhering to the tactics: "a candle to God and a poker to the devil." The puppet Ukrainian leader is simply obliged, adhering to a certain "common line" and agenda, which are already shaping in the West, to blurt out something about "democracy" and "dialogue", which, in principle, cannot exist in Minsk. But at the same time he does not want to spoil his relationship with the formidable "dad"! The real communication in the format of the presidents of the two countries is a telephone conversation between Kiev and Minsk, which took place literally on the eve of the elections, during which Zelensky was scattered in gratitude to Alexander Grigorievich for the humanitarian aid provided, "real friendship and valuable partnership." At the same time, the upcoming meeting of both at the October Ukrainian-Belarusian Third Forum of Regions was discussed as a matter of course - as if Lukashenka had no elections ahead of him. “Who will re-elect him ?! He's a monument ... "

Let me also remind you that one of the first Ukrainian politicians to congratulate Oleksandr Grigorievich on his victory in the elections was not only Viktor Medvedchuk, who is listed through and through as “pro-Russian”, but also, for example, the deputy of the Verkhovna Rada from the presidential party “Servant of the People” Yevhen Shevchenko. The inter-factional parliamentary union “For Free Belarus”, created yesterday in the Ukrainian parliament, demanding “not to recognize the elections in Minsk” and openly support the protests there, is an outright clownery in half with an attempt to “catch the hype” on the “hot” topic, which is soaked through and through all politics. nezalezhnoy ". In reality, the quarrel with Minsk is not interesting to anyone there.

No benefits, but a sea of ​​problems

Moreover, the victory of that very "opposition", in defense of which some of the Ukrainian politicians are wasting loud words today, does not "smile" at the serious people in this country at all. Let's imagine for a moment that the attempted coup d'etat on the Kiev model was also crowned with success in Minsk (God forbid, of course!). The results for Kiev will be immediate and very painful. First of all, in the field economics... It is not a secret for anyone that it is Belarus that has been a “staging post” for several years now for sanctioned and banned for export-import goods of the warring Ukraine and Russia. It is what it is. The most striking example is the supply of Belarusian oil products made from Russian raw materials to the “non-export”, without which Ukraine will have a hard time. And almost in the first place - its army, the absolute majority of whose fuel needs are provided just by the Belarusian "fuel". Moreover, there are, alas, other, completely not advertised points of tacit “broad cooperation in militarytechnical sphere "between Kiev and Minsk.

It is clear that with the hypothetical victory of the “Belomaidan” and the overthrow of Lukashenka, who at the very least knows how to maintain relations with the Kremlin, all this, as they say, will be covered with the notorious copper basin, and at the same time. Also, within the framework of such a scenario, the work of the "negotiating platform" in Minsk on the settlement of the situation in Donbass, where Ukrainian representatives so long and enthusiastically "play Vanka", pretending to be a "dialogue", will probably be stopped immediately. Representatives of the DPR and LPR will probably not go to any Poland or the Baltic states, and Russian negotiators are unlikely to agree to work on clearly hostile territory.

Kiev, of course, has long been not averse to tearing up the Minsk Agreements, but the trouble is that Paris and Berlin will not let it do it. What's more, they will force them to travel to Moscow for negotiations ... No, the status quo, which makes it possible to continue to break the comedy, positioning itself as a “victim”, suits Ukraine quite well. She is also satisfied with the role of "the leading anti-Russian outpost of the West", a country "defending the ideals of democracy and European values ​​from Russian aggression." Let's not forget - we are talking about a beggar country, which for the seventh year has already managed to more than successfully monetize its Russophobic inventions and actions. Does Kiev need competitors in this, and so it is becoming more and more difficult, business? No way! Why do Ukrainians need another post-Maidan "young democracy" at their side? You look, some financial flows of the West can switch to its support. And in fact, most likely, it will be so!

In the conditions of the "democratization" of Belarus through the victory of the "color revolution" there, there will be more than enough people who want to invest in the economy of this country, which has not been plundered at all, which has preserved excellent infrastructure and human potential (unlike Ukraine). Specific figures - last year foreign investments in the Belarusian economy amounted to approximately $ 10 billion. 2.5 billion were invested in "non-profit" with its almost five times the population. The same Poland, which today is one of the main donors and allies of Ukraine, in the event of a victory in Belarus of the pro-Western forces (already today led and directed from Warsaw), can switch to a much more promising and close "neighbor". By the way, there are no Bandera supporters hated by the Poles ...

There are a lot of similar moments, seemingly unobvious at first glance. The so-called "Lublin Triangle", recently created by Poland, Lithuania and Ukraine, undoubtedly represents another geopolitical instrument of a clearly anti-Russian orientation. By the way, even before the elections they tried to draw Belarus into it, turning this structure into a "square". But Kiev is well aware that if the "reformatted" politically Minsk is taken seriously and with all diligence to play such games, the "Ukrainian question" will very quickly recede into the background. That is why no one there will seriously contribute to the creation of a real "Maidan" in a neighboring country - it will be more expensive for itself. “The main oppositionist” Tikhanovskaya, who had already declared herself “the new president of Belarus,” perfectly understanding such nuances, safely left for “European” Vilnius, and not in any way to Kiev, where her ideological brothers are in power. It is correct - in the "nezalezhnoy", you know, with various "political emigrants" constantly all sorts of troubles occur, even the most tragic. Zelensky and parliamentary leaders will continue to continue extremely sluggishly, through clenched teeth and in an undertone, "condemn human rights violations" and mutter something vague about "tolerance" and "dialogue", knowing full well that no one will listen to them even in half. Well, you have to work out Western training manuals ...

So, the SBU had nothing to do with the provocation with the detained "Wagnerites"? I am sure that it had, and the most direct. However, when talking about Ukraine, one should always remember that this is, in fact, not a state in the normal sense of the term, where the special services obey its head or at least inform about the planned escapades. The power and “power” structures of the “nezalezhnoy” are more likely to be some kind of monster with many “heads”, which each act as they please, and at the same time are enthusiastically squabbling among themselves. At the very least, they show their tongues and spit at each other. Zelensky, the head of the government or parliament, really might not know anything about the impending provocation. And they might have known, but were not able to interfere with the operation, authorized by the United States - and this is even more likely. This incident, however, does not in the least remove from Ukraine, as a state, guilt for what happened - it only gives another reason to think about its unpredictability as a neighbor and "partner". Minsk, by the way, in the first place.
Ctrl Enter
Noticed oshЫbku Highlight text and press. Ctrl + Enter
We are
Ukraine from the inside: traitors, curators and those who watch from the Kremlin
Ten "defeats" of Putin
Reporterin Yandex News
Read Reporterin Google News
4 comments
Information
Dear reader, to leave comments on the publication, you must sign in.