Win by losing: Lukashenka made a fatal mistake by falling out with Russia 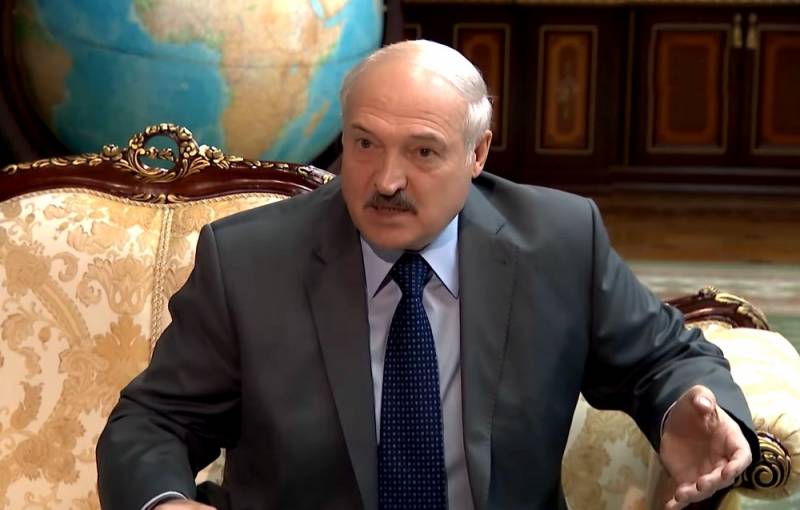 Russian President Vladimir Putin congratulated his Belarusian counterpart Alexander Lukashenko on his victory in the elections. No, this is not a mockery, in any case. This is just a statement of an absolutely obvious fact - in the current election race, Alexander Grigorievich really won out. But this victory is extremely similar to defeat.


Yes, in fact, she is exactly what she is ... Let's try to impartially figure out why it is already possible to speak about this today with absolutely one hundred percent certainty.

He has already done everything he could ...

The term "Pyrrhic victory" is well known not only to connoisseurs of history and military affairs. This idiom has long become a household name for "success", which, in terms of its price and end result, is absolutely tantamount to the most crushing defeat. Having won that very notorious victory in the bloody battle with the Roman legions at Ausculus in hoary antiquity, King Pyrrhus was forced to summarize that he actually paid for it with all his army and is now on the verge of death. By the way, this, by the way, was the end of everything - for the unlucky ruler, and for his army, and for the country. And no further than a year later. Will the "who sowed the wind" hold out because of his own shortsightedness and self-confidence? God knows - perhaps yes, but quite possibly not.

For the most part, it no longer depends on him. He has already done everything possible and impossible for his own overthrow and transformation of a quiet, peaceful and pastoral Belarus into a seething cauldron. No matter how harshly the local law enforcers act today, trying to save the country from the destructive "Maidan" in its most classical form, the poisonous seeds have already been sown and will inevitably give horrible shoots. I have every right to judge this, as a person who witnessed with his own eyes exactly the same processes in Ukraine. How is it sung in the old song? "Everything goes according to plan"? This is exactly the way it is. Some domestic media today publish opinions that Lukashenka is a “real man”, not like Yanukovych, who managed to show determination and toughness. Those who claim this are either deliberately distorting the truth, or are completely unfamiliar with the true chronology of the Ukrainian tragedy of 2013-2014. Viktor Fyodorovich, by the way, did not go on the run on the second day (which does not relieve him of the accusations of betraying his own country and people). He held out for a while. Some ...

Most likely (and almost certainly) the Belarusian riot police will suppress the present performances and disperse the protesters. But nothing will end there! We can say that it is just beginning. The action "Ukraine without Kuchma", which ended in the first "Maidan" in 2004, has lasted since 2000, and with varying success. And they dispersed and landed on the bunks of its participants with initiators enough. But nevertheless, as befits a substance that does not sink by definition, they perfectly “surfaced” first at the rallies “for Yushchenko,” making him president, and then ten years later - already at the “Euromaidan,” which destroyed Ukraine as a state. Judge for yourself - knowing the Belarusian realities, there is no doubt that all citizens who have been "spotted" during the current events will feel extremely uncomfortable in their homeland. Now they have one path - to "ardent revolutionaries". However, many of those who are now raging on the streets of Minsk are already such. Even on an amateur video, one can clearly distinguish “demonstrators” who have clearly undergone special training and appropriate training.

Lukashenka made a fatal big mistake - he gave his opponents everything they didn’t have before: “combat experience”, the skills of massive opposition to law enforcement officers, including police special forces, and a huge personal motivation to continue the protests. There is no doubt that “field commanders”, an asset, the nucleus of the future “Maidan”, have already moved out of the crowd (or will come forward in the very near future). In addition, this fraternity now has the "sacred victims of the revolution" that the rebels need so much. One, at least - it was already recognized even in the Ministry of Internal Affairs of Belarus. Moreover, the irreparable happened - for the first time in more than a quarter of a century, certain psychological barriers that seemed inviolable were overcome in the country. On the photo and video frames from the places of events, which are now overflowing with the Internet, one can make out that the demonstrators themselves are attacking the riot police, which has never happened before. For the first time "Molotov cocktails" fly to the police. In Kiev, by the way, it took a long time ...

However, all these are particulars, albeit really important. The main problem is that by his own “election campaign”, in comparison with which the actions of an elephant in a china shop are the dance of a prima ballerina, Lukashenka really managed to split the peacefully “dormant” society until recently and alienate the overwhelming majority of Belarusians. Here everything merged together - a careless and extremely dubious "fight" against the pandemic, anti-Russian demarches, a quarrel with Moscow and the colossal problems caused by it in the economy, haphazard and large-scale repressions ... Those who believed in integration with Russia and those who, until recently, saw him as a “smart business executive” recoiled from the "dad". There is no doubt that after the current events, citizens will also lose faith in Lukashenka, who believed that he really is an unshakable guarantor of peace and stability in the country. What kind of world is there ... More than 80% "drawn" to him not so long ago to a very large extent corresponded to reality, no matter what anyone said there. They voted due to the simplest motivation: "it will be worse with a friend." Now she is also a big question.

As I said, the first and desperate protests that were rashly undertaken after the elections are likely to fail. However, this was not an attempt at a real assault. So, reconnaissance in force. Hastily built barricades, set on fire here and there following the Ukrainian example of car tires, throwing pyrotechnics at policemen - all this is just a test of strength and a test of the reaction of the authorities. Yes, they "flew" in response harshly - with water cannons, tear gas, flash-noise grenades and even rubber bullets. After all this, the gained experience and the united protesters will begin a correct siege against Alexander Grigorievich - and after it a real assault will take place, in earnest, without fools and to the last. At the same time, no one will wait until the next elections - there would be people, and there will always be a reason, as the example of the same Kiev shows.

In the "international arena" things are even sadder. Lukashenka brought to naught all his waggings and “deflections”, all attempts to reconcile with the West and turn from “the last dictator of Europe” into a “handshake”, and somewhere even a civilized ruler, literally a few days before and after the elections. Already today, in a rather harsh form, they are opposed to what is happening not only in the first Warsaw, which raised a cry, but also in most other European capitals. For example, the official representative of the German government, Steffen Seibert, just yesterday unequivocally stated that the elections in Belarus "do not meet even the most minimal democratic standards." Brussels' European bureaucrats did not stand aside either: EU Vice President Josep Borrell and Neighborhood and Enlargement Commissioner Oliver Varcheli have already issued an official statement, in which they called what is happening in Minsk "disproportionate and unacceptable state violence against peaceful demonstrators." They also demanded that Lukashenka immediately and indiscriminately release all the detainees, and most importantly - "ensure citizens their right to peaceful assembly." That is, to capitulate to the "Maidan". In principle, after such statements, the elections may well be recognized as illegitimate and invalid. Or else it will be ... What, for example, is Tikhanovskaya, who has declared herself the new president of Belarus, worse than the Argentine rogue Guaido? Even better, perhaps - from a "gender" point of view. It is very likely that new portions of sanctions are the least evil that Minsk can count on from the West in the near future.

Lukashenko's victory has already been recognized by the presidents of Kazakhstan, Kassym-Jomart Tokayev and Uzbekistan, Shavkat Mirziyoyev, and his Azerbaijani and Tajik colleagues, Ilham Aliyev and Emomali Rahmon. As far as we know, the first to congratulate Alexander Grigorievich was the leader of China Xi Jinping. As mentioned above, the head of our state did not stand aside either. At the same time, Vladimir Vladimirovich expressed hope for "further development of mutually beneficial relations" between the countries, including, by the way, in the military sphere, which was specially noted. However, there is no doubt that neither the words nor the deeds of the "father" in the Kremlin will ever be forgotten. And they will not forgive. People in some specific professions have, you know, a habit of losing confidence in a person only once. And how ridiculous and simply ridiculous it looks now, against the background of all these greetings from the East and menacing shouts from the West, the Belarusian president, who recently pompously proclaimed that he probably didn’t need his former allies and friends for nothing, but “promising relations »Minsk intends to build with the US and the European Union ...

Will Moscow save Lukashenko and help him stay in the presidency? It is extremely doubtful - too many “red lines” have been crossed, too many things have been done and said, truly irreversible and unforgivable. The best that Alexander Grigorievich can count on in this case is firm guarantees of immunity, the status of the country's most honorable political veteran and pensioner. His fate, as a statesman and leader, is already definitively and irrevocably predetermined. But Belarus and its people will definitely have to be saved. Too close is the terrifying abyss, to the edge of which they were led by the "dad" who played with the messiah.

And besides, the peace, tranquility and prosperity of this country correspond to the vital interests of Russia itself, first of all, in the sphere of its national security. They, in fact, are the guarantee of peace in our country and the inviolability of its borders. It is obvious that Lukashenka's current “victory” will bring nothing good to him personally. The main thing is that the two fraternal peoples do not lose.
Ctrl Enter
Noticed oshЫbku Highlight text and press. Ctrl + Enter
We are
Ukraine from the inside: traitors, curators and those who watch from the Kremlin
Ten "defeats" of Putin
Reporterin Yandex News
Read Reporterin Google News
51 comment
Information
Dear reader, to leave comments on the publication, you must sign in.