"Fortune" is over: why the barge does not participate in the construction of "Nord Stream-2" 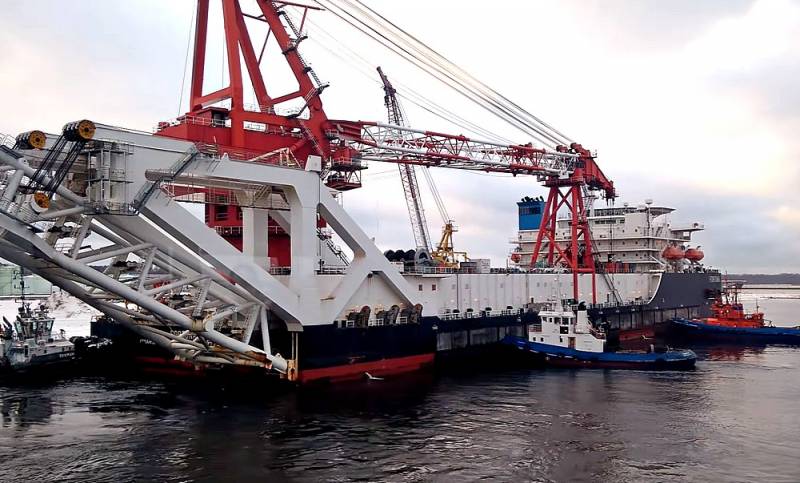 The technical capabilities of the Russian vessels assembled in the Baltic make it possible to complete the construction of Nord Stream 2 within a few months and launch it, as promised, by the first quarter of 2021. However, due to the pressure exerted by the United States and its European allies, the completion of the gas pipeline may again be postponed indefinitely.


Совсем недавно мы wondered the question of whether it is worth rejoicing in Denmark's permission to use the pipe-laying barge Fortuna in the construction of an underwater pipeline. The specialized vessel, unlike the Akademik Chersky, has only an anchor positioning system, so its use in Danish waters was a big question. Copenhagen still gave Fortune permission, but its “luck” was short-lived: the construction process was again suspended due to the start of spawning of cod. However, when the valuable species of fish stops spawning, the barge will no longer move towards the pipeline.

A rather unexpected statement followed from the Mezhregiontruboprovodstroy company:

The company does not accept and does not intend to take part in the execution of works on laying the Nord Stream 2 gas pipeline in the Baltic Sea using the Fortuna pipe-laying barge or in any other way.
There are at least two possible explanations for this turn of events. According to the first version, now the Russian contractor, following the Swiss one, is afraid of US sanctions and is ready to reel. The US restrictive measures are no joke. Mezhregiontruboprovodstroy works in the field of laying pipelines in the Far North and other harsh climatic conditions. It is easy to guess that some Western Technology and accessories. The long-term damage from US sanctions could be much higher than the benefits of participating in the completion of the few remaining percent of the problem gas pipeline.

Nothing personal just business. If this is true, Nord Stream 2 will freeze for an indefinitely long time. The only full-fledged pipelayer “Akademik Chersky”, which remained in the Baltic Sea, has not yet been retrofitted, since they were supposed to interact with the “Fortuna”. For fear of falling under sanctions, European contractors will not contact Akademik. Everything will have to be done again on our own, and this is a new waste of time.

According to the second, we are faced with a rather primitive trick with a change of ownership, with the aim of outwitting the US Treasury. Large companies involved in the project are diligently dissociating themselves from it. “Akademik Chersky” from Gazprom went to the little-known Samara fund STIF, the supply vessels “Ivan Sidorenko” and “Ostap Sheremet” - to the newly created JSC “Nobility”. It is likely that Fortuna will change its owner or tenant. However, there is little chance of getting out of this way. The United States has provided that an attempt to sell, lease or lease ships will still lead the former owner to the "black list". The only way to change the owner not specified by them is donation. Whether Washington will turn a blind eye to such a trick is a big question.

In addition to the United States, Poland also threw its five kopecks against Nord Stream 2. For refusing to provide her with all the project documentation, the Polish Competition and Consumer Protection Authority (UOKiK) demands a fine of 50 million euros from Gazprom. In the scale of the fines that the domestic monopolist has already received, this is a "trifle", but unpleasant. Warsaw believes that they are defending Kiev with their attacks on the pipeline:

There are some issues that we do not like, for example, Nord Stream 2. This project will allow Moscow to cut off Ukraine from gas supplies to Europe, and then do whatever it wants with this country.
Europeans are convinced that, having obtained a reliable bypass route around Independence, the Kremlin will tackle it harder. Whether this is true or not is a very controversial issue. As for the fine itself, the Poles have their own rights: according to their national legislation, a company operating in Poland must provide Warsaw with information about its other foreign projects in the EU. Earlier, the French company Engie was fined 44 million euros.
Ctrl Enter
Noticed oshЫbku Highlight text and press. Ctrl + Enter
We are
Denmark has skillfully played a game of blocking Nord Stream 2
Do I need to rejoice in the permission of Denmark to complete the "Nord Stream-2"
Reporterin Yandex News
Read Reporterin Google News
33 comments
Information
Dear reader, to leave comments on the publication, you must sign in.