The United States has "demoted" Russia from its main enemies. Why is it dangerous for us 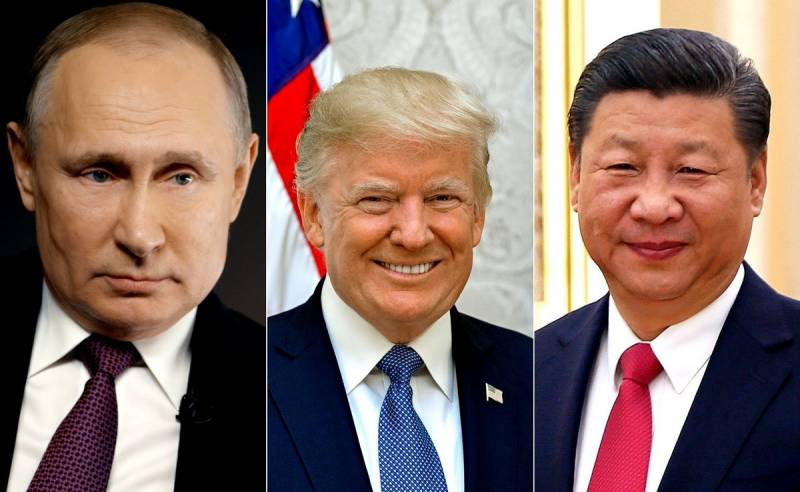 Moscow is no longer Washington's main geopolitical adversary, having ceded this “enviable” primacy to Beijing. This revelation was recently shared with its readers by one of the most authoritative publications in the West - the Financial Times. Really, one should be glad that from now on, the host of peaceful inhabitants in the United States should represent the Main Evil that threatens themselves, as well as their children and household members, not in the form of a shaggy and aggressive "Russian bear", but in the form of such a cute, but proving insidious and a malevolent Chinese panda?


No, not the slightest reason for positive emotions, and especially for complacency, such a US foreign policy turn does not promise us, the inhabitants of Russia. From what? Well, let's try to figure it out and find the answer to this question.

As a matter of fact, the broadcasted conclusions made by the FT journalists stem primarily from the speech of the US Secretary of State Mike Pompeo, made on 23 July. Perhaps historians someday will equate what the head of the State Department said at that memorable briefing with something like the famous "Fulton Speech" by Winston Churchill, who knows. In any case, many today are already talking about the fact that Pompeo, within the walls of the presidential library of Richard Nixon, uttered things that are, in fact, a full-fledged program of the new "Cold War" launched by the United States against China. The extreme harshness of the statements of one of the highest representatives of the US government indicates that the intentions towards the Celestial Empire are more than serious.

This time, the matter was not limited to the statement of "ideological and political disagreements "between Washington and Beijing, which the head of the State Department called no less than" fundamental ". In his speech, it was directly stated that the "new tyranny" generated by the Chinese Communist Party and personally by its leader Xi Jinping should be "defeated by the free world", which, in fact, is for such a "historical mission of our time" which, according to Pompeo, "all progressive humanity" should take upon itself. Otherwise, "China will certainly change the whole world" - presumably, in its own image and likeness. In general, there are long-known and memorable words about the new "Evil Empire" and calls for the next "crusade against communism." Except that this time Beijing, and not Moscow, is named as the main “lair of the enemy”. There are only differences ...

Tellingly, the Secretary of State did not say a word about Russia in his long and heartfelt speech. It is this, coupled with his positive answer to a question from one of the journalists about whether, in principle, our country could become part of the very anti-Chinese "democratic alliance" that Washington is now raving about forming, and gave rise to a lot of openly conspiracy theories that are now in the United States pretty wide circulation. The publication of the Financial Times mentioned by us directly states: "certain circles" in American politicians seriously expect that the Russians will stand under their banners in the planned "great battle" against the Chinese Dragon.

From purely mercantile and purely mundane considerations (the Americans, however, do not recognize other motivations), but they will join - because, as some in Washington believe, “the ties between Moscow and Beijing are not as strong as they seem” and “have a lot of vulnerabilities ". Pompeo himself designated this as "the contradictions arising from the natural relations of the two countries", which in his department dreams of quarreling as soon as possible and reliably. According to the head of the State Department, this ... "will improve security in the world!" Pompeo's deputy, Stephen Bigoon, is generally convinced that nothing binds China and Russia apart from a "common desire to challenge the United States." He believes that Washington should "show some flexibility" and find a "weak link" in Russian-Chinese relations, by pressing on which, they can be broken. In response to all these speculations from the Kremlin and the Russian Foreign Ministry, categorical assurances in the complete absence of a desire to "be friends against someone" (especially with the Americans!) And, on the contrary, the presence of the strongest intentions to further strengthen cooperation with China, in Washington, as usual, they ignored it, guided by the age-old principle: “Facts contradict our theories? So much the worse for the facts! "

... Enemies are no longer needed

However, the point here is rather something else. Speaking in public about the possibility of attracting our country to their side in the increasingly tough and large-scale confrontation with the Celestial Empire, American politicians who have at least a share of realism understand very well that the possibility of such a turn of Moscow is not just small, but truly scanty. To accomplish such a stunning somersault in the Kremlin, they would simply have to lose the instinct of self-preservation and be filled with gullibility, which is absolutely unusual for the current representatives of the local government. Contrary to all the assurances of the desire to "get along with Russia" from time to time from the lips of the same Donald Trump, our country in its current state is and will be considered by the United States as one of the main obstacles to the implementation of its only geostrategic goal - to maintain absolute dominance on the planet. , expressed in the model of the "unipolar world". And the fact that it is not the main one, namely "one of" - is only worse for us. Worse due to the fact that the Americans, as representatives of the Anglo-Saxon civilization, will probably act following their own age-old traditions, which developed back in the days of the British Empire and based on the principles of "divide and rule", and also "there are no permanent allies - there are only permanent interests." ...

Because of this, from the potentially dangerous for them geopolitical union of Beijing and Moscow, they will first of all try to "knock out" the "link" that seems to them weaker and more vulnerable today. That is, our country. Do not forget that former US President Richard Nixon, in whose memorial library Mr. Pompeo made fiery anti-Chinese speeches, spared no effort to normalize relations with communist Beijing precisely in order to prevent his alliance with the then communist Moscow, which was at that time enemy number 1 for the United States. And he was very successful in this ...

In particular, it is doubtful any "allied" intentions of the United States towards our country (even if we hypothetically assume the existence of such in principle) look in the light of the very real actions of Washington. For example, more and more new bills are being submitted to the Congress there, one after the other, according to which Russia should be recognized as a country sponsoring terrorism. One of the most recent initiatives of this kind is Democratic Congressman Max Rose, who claims that the mere listing of the actions of Russians around the world that led to the death of people under the rule of President Putin is shocking. This politician firmly intends to achieve the ranking of our country among those states against whom the most severe "measures of influence" by his state can be applied.

It is quite possible that this demarche will not be crowned with success, but the fact that such attempts on Capitol Hill have recently been made with depressing regularity indicates more than real prospects that sooner or later this plan will nevertheless be implemented - in especially if a representative of the Democratic Party wins in the upcoming elections. No less eloquent is the official statement made the other day by the Pentagon's press service that this department intends in the very near future to begin the development and deployment of sea-launched cruise missiles, which, in the opinion of its leadership, is downright “necessary component of containment of Russia ”. What alliances are there, gentlemen - it does not matter, against China or Papua New Guinea ?! The American point of view on Russia does not change - only through the sight ...

In no case do I presume to assert that the above logic will certainly lead the United States in the near future to some completely radical anti-Russian steps, such as unleashing a military confrontation. At the local level and by someone else's hands - it is quite possible and even likely. Directly - extremely doubtful. Nevertheless, it is not worth building an illusion that the increasingly violent conflict unfolding between Washington and Beijing will force the Americans to weaken the anti-Russian vector in any way. I am sure it will be exactly the opposite. Most likely, we will have to face both increasing sanctions pressure and all new demarches aimed at weakening the Russian economics... Following the usual logic of the United States' actions in similar situations, it is quite possible to expect the introduction of the widest range of restrictions "for cooperation with China." Considering how great the volume of such cooperation is in the case of Russia, another clash is inevitable here. It is difficult to predict to what depth the confrontation may reach, but its inevitability is obvious.

Yes, in the United States there is a tiny fraction of not so much sympathizers of our country (in any case!), But simply tough pragmatists who believe that in this situation it is quite possible to sacrifice less for the sake of more. In particular, the former US Deputy Assistant Secretary of Defense for Strategy and Development of the Armed Forces, Elbridge Colby, spoke on this issue in the sense that, in an effort to destroy the potentially dangerous alliance of Russia and China, the United States could, for a start, at least slightly “reduce the number of irritants in relations with Moscow. " Well, that is, spitting in our faces is not so often and not so much ... Nevertheless, apparently, even such timid appeals are unlikely to be heard in Washington.

Surely they will prefer to follow the path of further rude pressure, intimidation and issuance of ultimatums. We may not be the main enemy for the Americans, but we risk becoming a priority target.
Reporterin Yandex News
Reporterin Yandex Zen
6 comments
Information
Dear reader, to leave comments on the publication, you must sign in.