It's getting closer: NATO has made a new leap to the borders of Russia 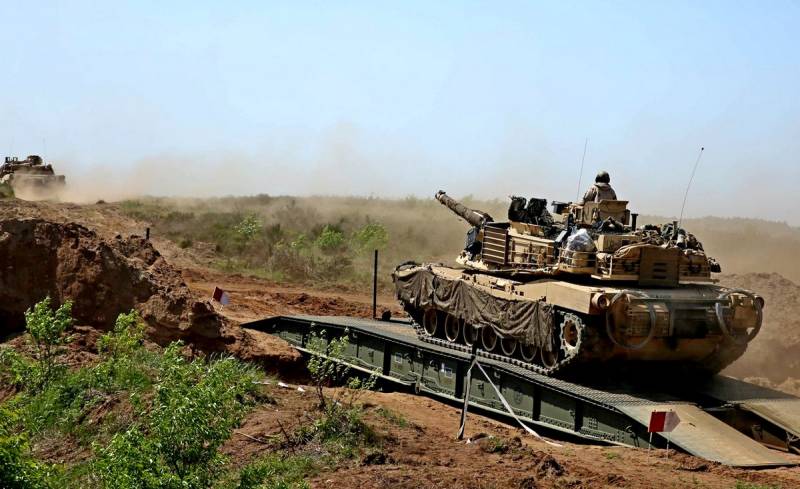 It just so happened that the dramatic events unfolding in neighboring Belarus, in which the citizens of Russia were unwittingly drawn, distracted the attention of the audience of domestic media from other events taking place very close to the seething political passions of Minsk. Newscoming today from Poland and the Baltic states do not carry such a “charge” of sensationalism as messages from the “Belarusian front”.


And, nevertheless, what is happening there, most likely, in the near future promises for our country, I am not afraid of this word, very ominous prospects. From idle speculations and general conversations on the topic of "containing Russia in Europe," the North Atlantic bloc, led by the United States, has gone over to an open offensive, having already come close to our borders.

On August 4, US Ambassador to Poland Georgette Mosbacher made an official announcement about the creation of a command structure of the headquarters of the US Army V Corps in that country. This "special" event, from the point of view of the American diplomat, was preceded by "fruitful" negotiations in Krakow, in which, in addition to herself, the Minister of National Defense of Poland Mariusz Blaszczak and American generals participated. In general, this step is a logical continuation of the Enhanced Defense Cooperation Agreement (EDCA) reached between Washington and Warsaw. This, in turn, became the implementation of the agreements concluded during the meeting between Presidents Donald Trump and Andrzej Duda, held in the United States in 2019. At first glance, the "expansion" in its current form does not look so serious - in the near future an additional 4.5 US military personnel will be redeployed to Poland in addition to the XNUMX contingent already stationed there.

However, it is worth taking a closer look at the statement made on this matter by the head of the Pentagon, Mark Esper, and it immediately becomes obvious that the situation is much more serious than it might seem upon superficial consideration. So, according to the head of the US military, in addition to the forward headquarters structures (not only of the V corps, but also of another division of the US army), the US military is deploying "observation and reconnaissance units" to our western borders, as well as "infrastructure to support combat groups of an armored brigade and a brigade of combat aviation ”. And now this sounds quite alarming.

Any person, even in the slightest degree versed in military affairs (albeit at the basic level), knows that the redeployment of command and staff structures of combat units to a particular strategic direction clearly indicates that it is in this direction, most likely, and active offensive actions are planned. The concentration in certain “key points” of intelligence, accompanied by the intensification of its activity, speaks of absolutely the same thing. And the support structures mentioned by Esper are designed to serve not defensive, but definitely offensive formations. There is no "higher mathematics" here - sheer "arithmetic" of the war, understandable already at the level of a platoon commander. Moreover, in addition to the belligerent Warsaw, the Baltic countries are headlong into the ranks of the anti-Russian military alliance that Washington hastily cobbled together.

As a recent example, we can cite the deep regret recently expressed by the Minister of Defense of Lithuania Raimundas Karoblis that at present "the advanced forces of the US and NATO forces" no longer have enough space in this country for the exercises, which are being conducted there almost continuously. Karbolis announced that the Lithuanian side plans to increase the number of relevant training grounds in the very near future (in addition to those already existing in Rukla, Kazlu Ruda, Pabrada), and the emphasis will be on the deployment of new military facilities in the western part of the country. That is - as close as possible to the Kaliningrad region, to which the Alliance is increasingly "sharpening its teeth". By the way, right now in Lithuania, regular maneuvers are underway, for which seven American Apache helicopters and two Black Hawk helicopters arrived there. It is quite possible that this is due to the fact that in July this year the US State Department approved the sale of six UH-60M Black Hawk helicopters and equipment to Vilnius. Why would a tiny country need almost $ 400 million worth of attack helicopters? The answer is obvious ...

War with Russia to the last ally?

Brigadier General Jörg Walmer's reflections on this very point are more than obvious evidence of what NATO has for the Baltics. This figure, however, does not belong to the US army, but is the chief of staff of the German Bundeswehr, which, however, still testifies to his high position in the North Atlantic Alliance. Herr Volmer is very concerned about "improving infrastructure" in the relevant areas, and these improvements should, in his opinion, be of a purely specific nature. Namely: to provide for the quickest possible transfer of "hundreds of tanks" to the Baltic States, for which, in particular, according to the German headquarters officer, it is necessary to "strengthen bridges and overpasses." The general generously spices up all these reflections with his usual panicky assurances that "Russia will certainly attack the Baltic states" and rant about the need to "protect" them.

However, the true intentions and goals that are in his mind, crawl out like the notorious awl out of a sack, it is only necessary for Volmer to distract himself from political chatter and move on to concrete reflections on the strategic importance of the "Suwalki Corridor" and the "terrible danger" emanating from the Kaliningrad area. Here they are aiming ... However, not only there. In a statement made by the Pentagon specifically following the completion of the EDCA negotiations, it is quite openly stated that its purpose is not just the traditionally mentioned "strengthening NATO and strengthening the containment of Russia", but specifically "strengthening the eastern flank of the North Atlantic Alliance in close proximity to Black sea ​​". Our country is surrounded - why is there ...

The United States and its allies do not completely hide their own aggressive intentions in the Black Sea region. Okay, the Sea Breeze exercises that took place there from July 20 to 27 this year, in which about 2 thousand servicemen from Ukraine, the USA, Georgia, Bulgaria, Norway, France, Romania, Spain and Turkey, more than 20 ships, as well as combat aircraft and helicopters participated ... No sooner had these maneuvers been over than the Americans staged new military games in the Black Sea area directly by the forces of the US Sixth Fleet. The missile destroyer USS Porter (the one that struck Syria in 2018), the Poseidon P-8A reconnaissance aircraft, four F-16 fighters, the MQ-9 Reaper drone and the KC-135 Stratotanker tanker aircraft, frolicked around merrily. from the most important Russian naval bases, practicing attacks against a "potential enemy" from sea and air. According to the commander of the Sixth Fleet, Vice Admiral Eugene Black, this "realistic and timely training is designed to strengthen the US willingness to operate at sea in the Black Sea region." It remains only to ask Mr. Admiral a question: "And what the hell did he and his compatriots in this very region even forget ?!" The answer, apparently, is quite simple - the United States, with all its desire to fight with Russia to the last Pole, Lithuanian, Ukrainian or Georgian, is forced to "insure" and prepare to personally support those sent for slaughter in the event of a very bad turn of events. the forefront of the attacking "allies".

This is precisely the conclusion that suggests itself when analyzing their actions on the ever-accelerating gathering around Russia of a ring of its own military bases, command centers, and the transfer of tank units and strike air groupings to its borders. There is one more thing. Today the European media is actively discussing the issue of the withdrawal of American military contingents from Germany. At the same time, the main reason for the White House's adoption of such a decision is the desire of Donald Trump to "punish" Berlin for intransigence in increasing budget spending on defense to 2% of GDP. Undoubtedly, such a motive is present. However, it should be borne in mind that the real American power is not only the president, the State Department and other well-known structures. There is a strong suspicion that the move of the center of the United States military presence in Europe from Germany to Poland is also connected with a clear understanding of the fact that the Germans are categorically unfit for the role of "cannon fodder" in the military adventure against Russia being launched by the true rulers of the United States. Russophobic enthusiasts like Herr Volmer are the exception rather than the rule in today's Germany. No, the rest is not that they love us ... They just remember how the wars with the Russians end and want to live. Calmly, peacefully, as long as possible and satisfying. According to a poll conducted by the YouGov sociological institute and commissioned by the German news agency dpa, more than 47% of its German respondents received the news that a third of American soldiers stationed in the country would soon go far away, with the most sincere joy. Moreover, every fourth German surveyed believes that not a single US military army should remain on the territory of his country.

That is why Washington seeks to train and arm those in whom it sees its own "first strike forces" - Poland, the Baltic States, Ukraine. Moreover, this case, in addition to a purely military component, also has a purely commercial motive. The "newest and best in the world" F-35 for Warsaw, combat helicopters for Vilnius, anti-tank missile systems for Kiev - all this brings good earnings to the American military-industrial complex. We have to admit that Washington managed to create around Russia a "belt" of states that are extremely hostile to it, whose authorities are, in fact, puppets, dutifully fulfilling the will of overseas puppeteers. We are witnessing the beginning of the implementation of the next stage of the same sinister plan: the concentration of troops and weapons on our borders that pose a potential threat to the security of Russia. What can follow next? I would like to believe that those who are entitled to it know the answer and are ready to respond appropriately.
Reporterin Yandex News
Reporterin Yandex Zen
17 comments
Information
Dear reader, to leave comments on the publication, you must sign in.