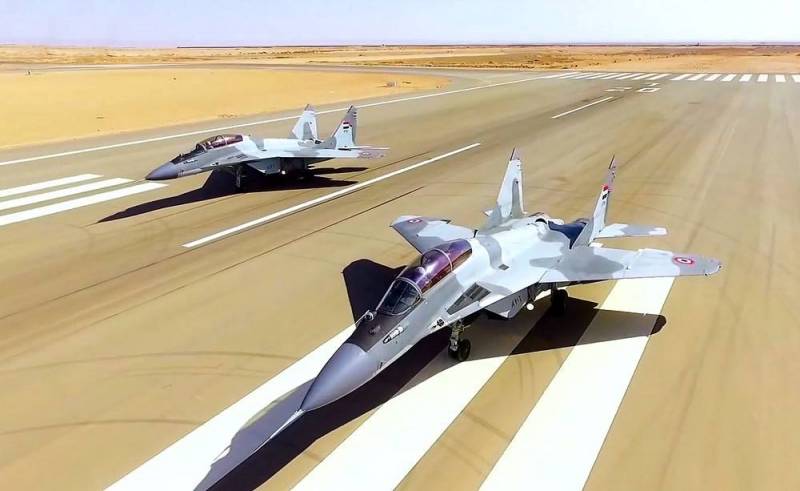 Nobody wanted a war between Turkey and Egypt. War between them is inevitable. True, most likely, it will take place in the format of a "proxy" war. What gives us reason to believe so, let's try to figure it out.


In the struggle with Ankara for the "Libyan inheritance", Cairo has now come to the fore. The Turkish patriotic public, believing in the strength of their army, is preparing to shoot down Russian-made aircraft serving in the Egyptian Air Force and burn Russian tanks to send them to "scrap metal." Who will run down or burn whom is a debatable question. On the topic of the real capabilities of the Turkish Air Force in Libya, we reasoned separately.

It is worth noting that both President Erdogan and his colleague Al-Sisi would clearly prefer to avoid a direct clash of force, preferring to act in a subtle oriental way. There are at least two important reasons for Cairo to embark on the path of war with the Turks.

At first, it's a matter of national security. In Egypt, a military coup took place quite recently, as a result of which President Mohammed Morsi was ousted from power. Despite this, in the land of the pyramids, there are still many of his supporters from the Muslim Brotherhood movement, which is considered pro-Turkish. It would be extremely short-sighted for all the former provinces of the Great Port to ignore the attempts of "neo-Ottoman revenge" actively pursued by President Erdogan. Having established a foothold in Libya, the Turks could later help in a coup d'etat in neighboring Egypt, placing a loyal government in Cairo.

It should be noted that President al-Sisi has already practically solved this problem, having obtained permission from the union of tribes and the Libyan Parliament to enter troops. It can be assumed that the de facto once prosperous North African country will be divided into spheres of influence: the West will remain with Turkey, the East - with Egypt. The unspoken border will be the "red line" that Cairo drew near Sirte. But this does not mean that the war will end there.

Most likely, it will turn into clashes between the Turkish "proxies" in the person of the PNS militants and the Egyptian-supported LNA of Khalifa Haftar, and their rear on both sides will support, preventing a final defeat, and supply professional armies. This means an endless war, but Cairo will thus protect its national interests by creating a buffer zone in the border area.

Secondly, until the money issue is completely resolved. Economy Egypt is in a deplorable state. Due to the pandemic, the famous tourist center missed 5% of its GDP and another 10% of GDP in the form of remittances from Egyptians who work abroad. Plus, a hydroelectric dam under construction in Ethiopia threatens to tear to shreds traditional agriculture in the Nile Valley. Cairo was forced to apply to the IMF for a multi-billion dollar loan, but it will be given only on openly predatory terms.

The lifesaver could be the transformation of Egypt into a major exporter of energy resources found in the Eastern Mediterranean. There were real plans to significantly increase the volume of supplies, but then Turkey crossed the path. In exchange for military assistance to Tripoli, President Erdogan has thoroughly redrawn the sea borders with Libya in his favor, which has called into question the gas ambitions of the Egyptians.

The problem must be urgently resolved, but preferably without a direct war with a state with a powerful army and navy. And here again Eastern diplomacy shows itself in action. It is reported that Cairo sent XNUMX of its soldiers to Syria to support Damascus. This was confirmed by the Turkish agency Anadolu:

Egyptian troops were deployed in the Khan al-Asal area in the western Aleppo countryside and around the city of Saraqib in the southern Idlib countryside.
It is clear that 148 fighters will not change the balance of power in favor of the Syrians, but this is a clear signal to Ankara. If it is not possible to agree on the economic part in Libya, then Egypt will create a problem for Turkey already in its underbelly, sending soldiers and militants and, possibly, providing military assistance to the Syrians with technique and other supplies. As you can see, these recipes work both ways.
Ctrl Enter
Noticed oshЫbku Highlight text and press. Ctrl + Enter
We are
Ukraine from the inside: traitors, curators and those who watch from the Kremlin
Ten "defeats" of Putin
Reporterin Yandex News
Read Reporterin Google News
7 comments
Information
Dear reader, to leave comments on the publication, you must sign in.