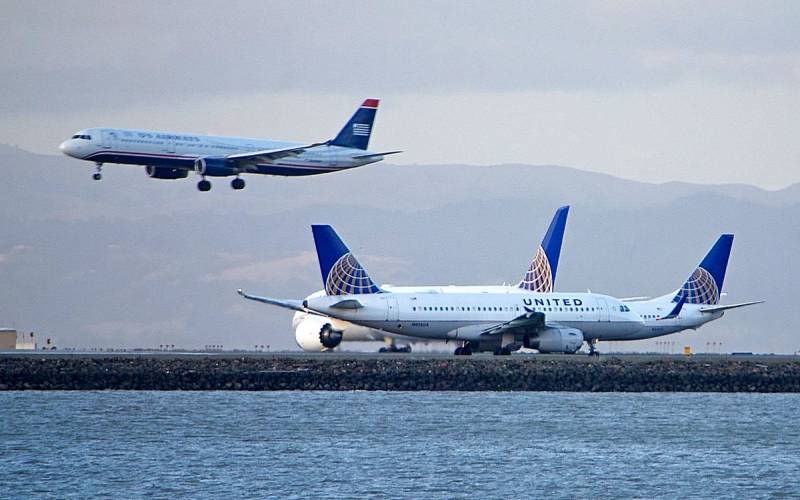 Even against the background of a general, to put it mildly, far from favorable situation in the American the economy the situation in its “winged” industries related to both air transportation and aircraft construction looks especially depressing. The country, which has held the leading positions in these areas for many years, is going through a period of extremely painful "landing" that threatens to bring additional destructive moments to the unprecedented crisis in the United States.


At the same time, one cannot remain silent about the fact that the causes of the current catastrophic situation lie not only in the coronavirus pandemic. What else?

Let's start with things that are common knowledge, but critical for understanding the seriousness of the problems of the United States aviators. Let's remind: there are no state-owned airlines in the country as such. Until recently, 80% of all air traffic (both domestic and international) there was controlled by the so-called "big three" airlines: American Airlines, Delta Air Lines and United Airlines. There were, however, a dozen more carriers, representing a mere "smallness" on the scale of the United States. It is not known for certain how these companies are doing today, and how many of them survived at all. However, based on how salty the market leaders are nowadays, the most gloomy assumptions arise.

The thing is that despite the complete and undivided domination of "private owners" in the field of air transportation, the US federal government regularly and very generously subsidizes this industry, and we are talking about injections amounting to many billions of dollars. In the current crisis situation, official Washington also did not stand aside, offering the representatives of the Big Three more than generous funding in exchange for making commitments to preserve jobs. For example, the same United Airlines received $ 50 billion from the federal budget, in exchange for an oath pledged by September 30, not only not to fire a single person, but not even to "cut" their salaries. The American authorities can quite understand that if air carriers carry out large-scale staff reductions, the whole horde of newly unemployed will immediately line up for benefits, which will have to be paid again from the treasury. So it's better to let the companies try to "stay in the air" - maybe it will work out?

Alas, apparently, it doesn't work. The same United Airlines has already issued an official statement addressed to its own employees, which will definitely not please them. “We have been honest with you in warning that the size of the workforce will be matched to the demand for travel,” the message reads. "Alignment" will result in layoffs (albeit positioned as "temporary") for at least 36 thousand people who today work at United Airlines. The fact that they plan to cut about half of their staff employed in the United States testifies to what the real demand is and how they see their own prospects in the company's management. What can you do - the traffic volume in July 2020 fell by more than 75% in comparison with the same period last year. The situation with American Airlines Group is absolutely no better, where after the expiration of federal "guarantees", that is, from October 1, they intend to put out more than a fifth of their own employees - 25 thousand people. The first to "go out" (for now - on the so-called "unpaid leave") will be workers of airports and other technical staff. Further - who knows ...

The corresponding warning letter has already been sent to the entire team. Not surprising when you look at the harsh financial statistics recently released by representatives of the third leading US airline, Delta Air Lines. The net loss of this carrier in April-June 2020 amounted to more than $ 5.72 billion. The company's revenue decreased by 88%, with the drop in revenues from passenger traffic was 94%, and from cargo flights "only" 42%. The company's capitalization since the beginning of the year has decreased by 54% - in fact, it has fallen in price by more than half.

“Airplanes first”? What for?!

With such a catastrophic drop in demand for air travel and the impoverishment of even the leading companies in the industry, the future of corporations involved in the creation of winged aircraft looks more than bleak. In the case we are considering, we are talking, first of all, about such a global aircraft manufacturing giant as Boeing Co. The global crisis caused by the coronavirus pandemic has become for this corporation only a continuation of a long series of problems that began with two Boeing 737 MAX plane crashes that led to the complete decommissioning of this model's airliners around the world. Ultimately, the drop in demand for the company's products became completely unprecedented - in the second quarter of 2020, Boeing delivered almost 78% fewer commercial aircraft to customers than in the same period last year. At the same time, the reduction affected the entire "line" of the manufacturer - from 737 to 787 models.

Some of them, as it became known, will not survive the current difficult times at all. Thus, the company has already announced its intentions to completely stop the production of one of its own iconic "offspring" - the famous Boeing 747-8, known as the Jumbo Jet. This four-engine passenger airliner, of which more than one and a half thousand units have been produced since 1969, is recognized as hopelessly outdated and "does not fit into the new economic realities." It ceased to be in demand among airlines long before the start of the pandemic, and now it has turned out to be completely unclaimed. The last Jumbo Jet will be assembled within the next couple of years at an aircraft factory near Seattle, after which this model will finally become a property of history.

On top of that, instead of developing and testing new models to replace the obsolete ones, the corporation got stuck in various commercial disputes, litigation and other litigation. For example, the Norwegian airline Norwegian Air Shuttle ASA is determined to break its previous contract for the purchase of more than 90 Boeing 737 MAX units. Moreover, the dispersed Scandinavians are also trying to kick out the purchase of five Boeing 787 Dreamliners, referring to the fact that the engines installed on them are manufactured by Rolls-Royce Holdings Plc. allegedly they do not function normally, which forces the airline to carry out "unplanned technical work", driving it into additional losses. As far as it is known, Norwegian Air Shuttle tried to resolve the issue of compensation with Boeing "in an amicable way", without arbitration and lawsuits, but the corporation did not go forward. It's easy to guess what will happen next.

In turn, the American aircraft manufacturers themselves "embarked on the warpath" with the Brazilian company Embraer, which is accused of disrupting earlier agreements. At the same time, which is typical, both sides blame each other for dishonesty, dishonesty and almost malicious fraud. The essence of the conflict is that between Boeing Co. and Embraer, back in 2018, an agreement was reached to create a joint venture for the production of aircraft for civil aviation. Under the agreement, the Americans had to invest $ 4.2 billion in the business and, as a result, receive an 80% stake. In reality, after two years, neither the money was paid, nor the enterprise was created. Woz, as they say, is still there, and the failed partners continue extremely nervous communication in the courts.

The most unpleasant moment for the United States can be considered the fact that the General Director of Embraer Francisco Gomez Netto has already issued a statement in which he stressed that such "reliable" partners as the Americans, his companies are not needed for nothing. Moreover, the Brazilian side intends to consider the prospects for cooperation in the field of aircraft construction "with other countries." This means Russia, India, and even China, which is, of course, a sharp knife for Americans now. At the same time, it is impossible to keep silent about the fact that the problems that are now prevailing in certain sectors of the US economy are largely rooted in the tough confrontation with the Celestial Empire unleashed by Donald Trump and his administration. Who knows, Beijing would have made a decision to ignore the desperate requests of Delta Air Lines and United Airlines regarding the resumption of their flights to China to the level preceding the pandemic, if not for the constant anti-Chinese rhetoric of official Washington. It was necessary to accuse more of the Chinese comrades of "creating and spreading the coronavirus", to impose sanctions against them even more widely, it is not clear why, and to conduct endless talks about some kind of "compensation" allegedly owed from Beijing to the "injured Americans" and calculated in exorbitant amounts ! The Chinese side, which has repeatedly stressed its own unwillingness to even discuss such absurd claims, rather than following them, quite naturally closes the "doors" of its country for the Americans today, including its airspace.

In Washington, instead of thinking about their own behavior and revising it before it's too late, they continue to follow their usual manner - to introduce new bans and restrictions. We will remind that after the accusations made against China by the US Department of Transport in violation of certain "bilateral agreements" (by the way, there is no agreement on "open skies" between the countries), Donald Trump with great enthusiasm signed a decree, according to which, from June 16, Chinese airlines are prohibited make scheduled flights to the United States. Until they "change their minds" and "correct themselves" ... The fact that Beijing, which is extremely serious about everything that is aimed at preventing a second outbreak of the coronavirus in the country and is increasingly sensitive to the attacks of the United States, in this case will back down, it seems more than problematic. Rather, in the current realities of the extreme aggravation of confrontation between the two countries, one should expect a complete closure of the Chinese sky for American airlines.

Who will lose more from this is a rhetorical question, especially taking into account the above facts and statistics. For example, Delta Air Chief Executive Officer Ed Bastian recently said that the blow to air travel in the United States by the pandemic and the resulting financial and economic crisis was "overwhelming" and, in his opinion, a "sustainable recovery" for the industry. earlier than in a couple of years it is not worth even dreaming. Additionally driven "into a tailspin" political games in Washington, American aviation may not get out of it.
Ctrl Enter
Noticed oshЫbku Highlight text and press. Ctrl + Enter
We are
Coronavirus "clipped wings" aviation around the world
On the verge of a big redivision: China enters into an energy war
Reporterin Yandex News
Read Reporterin Google News
12 comments
Information
Dear reader, to leave comments on the publication, you must sign in.