Why the Far East rose against Moscow 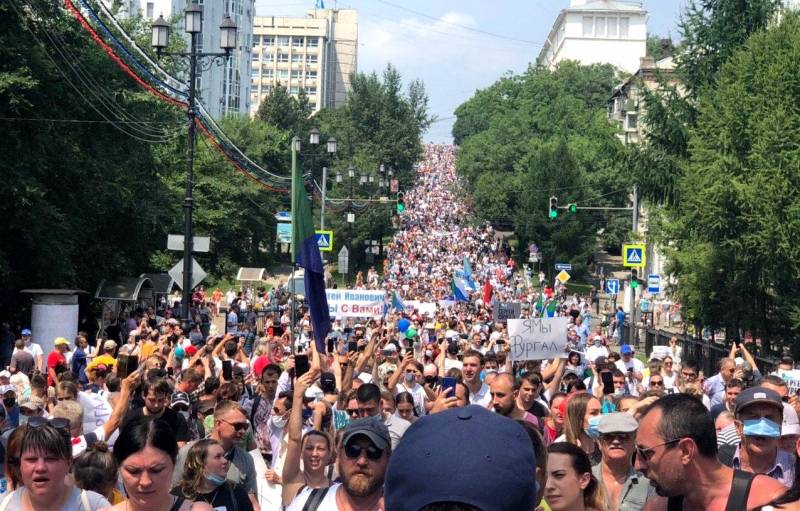 Thousands of protests in Khabarovsk have not subsided for several weeks. The reason for them was the detention of the ex-governor Furgal. Local activists demanded a fair trial for him at home without taking him to Moscow, but the agenda has now expanded significantly.


Some Khabarovsk residents are already demanding the resignation of the head of state, and the regional deputy Pyotr Yemelyanov proposed to introduce the so-called. residency qualification, according to which only one who has lived in the region for 10 years can become a governor. The problem of the periphery-center relationship and rejection of the “Varangians” is already quite obvious. It is no longer a matter of Furgal, but of the fate of the Far East, and possibly the future of all of Russia.

The Far East was once our most dynamically developing region: the “gateway to Asia”, and at the same time an outlet to the Pacific Ocean. Now this region is depressed and subsidized. Just a few decades ago, opposite Blagoveshchensk, with a population of 200, was a small Chinese village. Now in its place is the one and a half million metropolis Heihe, from where the inhabitants of the Celestial Empire are intently examining the gradually decaying Russian city with the same two hundred inhabitants. And then nothing else, because the Far East actively "vote with their feet": those who are capable of foreign languages ​​leave for China and South Korea, the rest - for the central regions of Russia. The objective “centers of power” for the remote region are Beijing, Seoul and Tokyo, not Moscow.

We know from textbooks that the Far East, like Siberia, is rich in natural resources. The nuance lies in the fact that a significant part of them are difficult to recover. Development and production are carried out mainly on a rotational basis, with the employment of guest workers, and the head offices of the companies are registered and located in Moscow. This does not bring much benefit to the Far Easterners themselves, high salaries are "drawn" for statistics at the expense of the arithmetic mean with some positions of managers in large companies.

Production results are also not fairly distributed. For example, in Vladivostok the prices for fish and other seafood are quite Moscow ones. This is achieved due to the fact that most of the fishing quotas are received by the capital companies, and the locals are left with pitiful crumbs. Fresh catch from the Far East is taken out and returned to stores in the form of semi-finished products, the cost of which includes both processing and transportation in both directions.

There is some kind of work in the regional centers, but practically none at the periphery. The able-bodied population is consistently leaving. The level of medicine is not at a high enough level, in difficult cases one has to fly for treatment either to the central regions of the country, or to neighboring China and Korea. "Pleasure" is very, very expensive, both due to the cost of the flight and due to medical services and the need for accommodation. All this is available only to a very limited circle of wealthy people in the Far East.

The situation with food and consumer goods is not easy. Despite the presence of China, Japan and South Korea nearby, the imported goods must first be brought to Moscow for customs clearance, which automatically nullifies the regions' apparent competitive advantage. Therefore, some local residents do not hesitate to engage in smuggling, others - even poaching. The Chinese and domestic "black lumberjacks" are cutting down the forest with might and main, demolishing the taiga in favor of businessmen from the PRC. Law enforcers are either unable to put an end to this, or prefer to mostly turn a blind eye.

Let's be fair. This is not to say that nothing is being done to rectify this state of affairs. This is the creation of a corporation for the development of the Far East, and the "Far Eastern hectare" program. Young professionals are being lured into the regions with preferential mortgages. The Zvezda shipyard is under construction in Primorye, which can become the basis for a real production cluster. But there are a lot of problems here too. Few are ready to move from Central Russia to a subsidized remote region. Mortgage benefits are good, but they are offset by the overall high cost of living and difficulties in finding a job. The idea with a "hectare" was perverted by local officials, cutting the land with infrastructure in favor of the "right" people, the rest are offered a bare field. By the way, it would be wiser to distribute the same hectare to everyone who wants to cultivate it, but not in the middle of nowhere, but in their native region.

These are far from all the problems of the Far East, but what has been said is enough to understand that the protests in Khabarovsk against the central government do not stand in an empty place. Local residents write on posters that they are "not a colony." Perhaps the Kremlin should pay more attention to the aspirations of the people?
Reporterin Yandex News
Reporterin Yandex Zen
48 comments
Information
Dear reader, to leave comments on the publication, you must sign in.