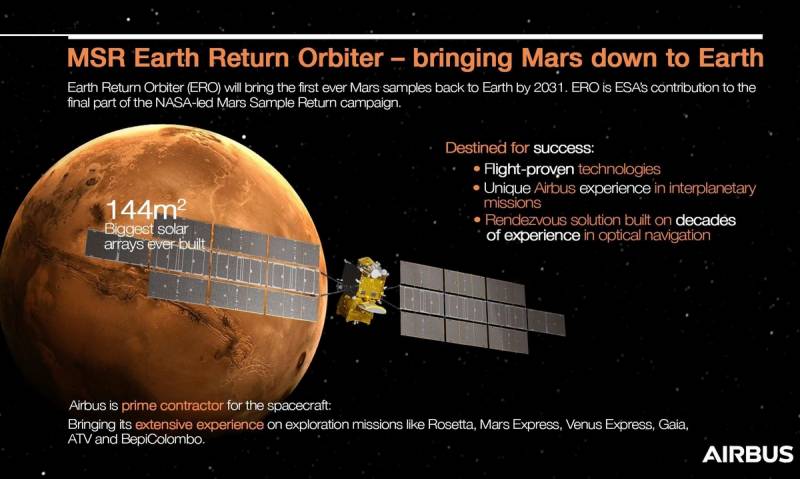 Today, as part of the Mars 2020 mission, the Perseverance rover was launched by the American space agency. Unlike Curiosity, which was sent to the Red Planet in 2012, Perseverance will not only look for possible signs of life on our neighbor in the solar system, but also collect samples of Martian soil, which will subsequently be delivered to Earth.


NASA and ESA are already working on the most difficult mission in the history of astronautics. So, on the eve it became known that the European concern Airbus Space will create a unique space orbiter called the Earth Return Orbiter (ERO). The latter will essentially become the first interplanetary cargo ship.

The signing of the corresponding contract between ESA and Airbus will take place in September. The total cost of the project will be $ 8,7 billion. At the same time, the share of the European Space Agency will amount to only 1,7 billion. The main "financial burden" will fall on NASA.

The participants in the ambitious project note that the upcoming mission will be the most difficult in the history of astronautics. Its essence is as follows: the newest research rover Perseverance will collect the necessary samples of Martian soil and place them in a special container. Then the rocket, delivered to NASA on the Red Planet along with the lander, will "pick up" the valuable cargo and put it into orbit.

Next, the aforementioned ERO device comes into play. It will "grab" the container, deliver it to Earth's orbit and load it into a special rocket capsule that will overcome the atmosphere and land in the American desert.

The launch of the first "space truck" is scheduled for 2026. Its weight will be 6,5 tons. Ion engines, which will require a large amount of energy, will be responsible for overcoming several million kilometers. The developers plan to solve this problem thanks to the huge solar panels, the total area of ​​which reaches 144 m². They will be arranged in three rows on the ERO wings, which will span 39 meters.
Reporterin Yandex News
Reporterin Yandex Zen
6 comments
Information
Dear reader, to leave comments on the publication, you must sign in.