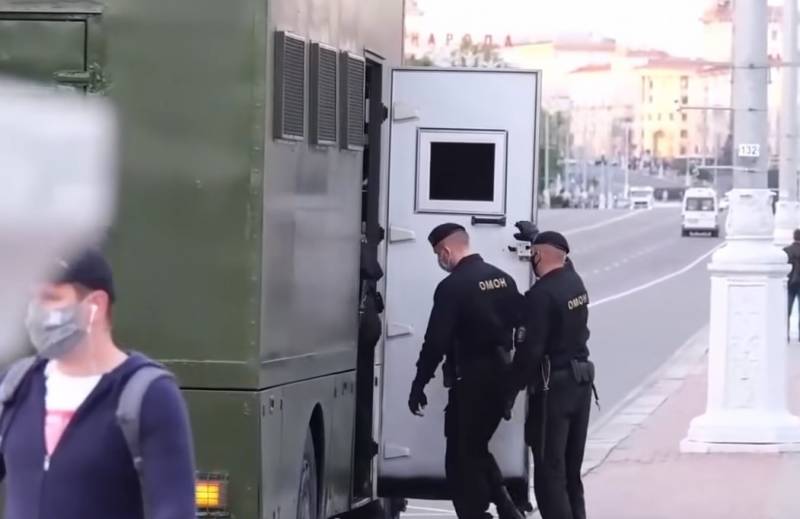 The scandalous story of the detention near Minsk of fighters of a "Russian PMC", who were immediately charged with very serious criminal articles, raises many interesting questions. In the Belarusian media, this is presented almost as an attempt by the famous "Wagnerites" to overthrow Lukashenka. However, apparently, these may be other people, not so "polite".


First of all, it is necessary to say once again that no PMC Wagner (Wagner Group) legally exists. In Russian law, only private security companies are allowed, not military companies. The Wagner brand became widely known in 2014, when it turned out that some power issues were easier and more effective to solve outside state channels. "Wagner's" is a collective term denoting Russian military experts who are ready to serve for a fee in hot spots around the world: in the Donbas, in Syria, Libya, and other countries.

In domestic and foreign media, this unofficial paramilitary structure is usually associated with the name of the famous businessman Yevgeny Prigozhin, known for his closeness to the Kremlin. It is quite obvious that without tacit support from the state, the activities of such an organization would hardly be possible, since the special services would immediately have many questions. In Moscow, they turn a blind eye to the "Wagnerites", despite their lack of legal status, since their work meets the interests of modern foreign affairs. policy country and big business. But in Minsk, for some reason, they stopped turning a blind eye to the mercenaries, and I would like to figure out why.

“Belarusian transit” for military experts with private contracts has existed for a very long time. In particular, close military contacts with Sudan and Libya took place under President Lukashenko. To help the official Tripoli, back in the days of Gaddafi, an unofficial "labor exchange" worked in Minsk in 2011, where former military personnel with combat experience could be hired into the Libyan army. In the Belarusian capital, one could enlist and fly to Venezuela or Cote d'Ivoire. Today, against the background of restrictions with the coronavirus pandemic, you can fly from Minsk to Turkey, the UAE, Sudan or Ethiopia. It is known that the detained 32 mercenaries simply missed the plane, so they waited in a sanatorium near Minsk.

All this is well known to the Belarusian KGB, so why did his eyes open only now? Apparently, the "epiphany" came due to the fact that several factors developed simultaneously.

At first, the accusation of "Russian interference" gave rise to President Lukashenko to try to rally the nationalist public around him. It also made it possible to bring security officials into Minsk, which can be used to disperse protesters who disagree with the results of the upcoming elections. It would be imprudent to ignore this possibility, when so much is at stake.

Secondlyas it turns out, not all mercenaries are the same. The Internet is actively spreading information that it was not the Wagnerites who were detained, but the fighters of the MAR. Its founder, Alexei Marushchenko, explained:

In 2018, we decided that Mar had completed the tasks assigned to it. Therefore, it was eliminated. What is happening in Belarus now, I have no idea. I am not detained. And I don’t know any of the fighters detained near Minsk.

This organization has officially ceased to exist, but is this of fundamental importance for such a business? The question is rhetorical. On the open spaces of the Runet, information about Mr. Marushchenko is already walking, which makes his person very odious and ambiguous. Moreover, there are rumors that the detained mercenaries flew to Turkey, from where they were supposed to cross over to Libya, where, under a contract, they undertook to guard the oil fields in the interests of the PNS Faiz Saraj. That is, against the LNA of Khalifa Haftar, whom the Kremlin and Wagner secretly support. It is not excluded that the Belarusian KGB preferred to curb these mercenaries instead of the "Wagnerites", knowing that Moscow would treat this with understanding.

Thirdly, the conditional "Marovites" themselves firmly substituted, deciding to stay in the sanatorium "Belorusochka". It is just over 7 kilometers from the residence of President Lukashenko. The Belarusian security officers could interpret the appearance of foreign military experts in the immediate vicinity of the head of state's residence in their own way.

This whole dark story raises the question of the need to legalize the activities of PMCs, since their fighters are absolutely powerless and completely dependent on the political situation.
Reporterin Yandex News
Reporterin Yandex Zen
11 comments
Information
Dear reader, to leave comments on the publication, you must sign in.