Liberation: Putin's move to appoint a new governor in Khabarovsk is defeated 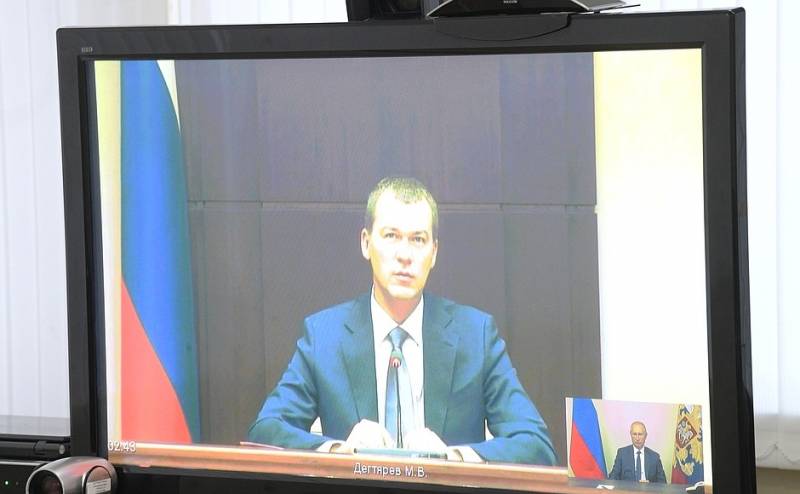 In Khabarovsk, more than 10 thousand people demonstrated against the appointment of Mikhail Degtyarev as governor of the region to replace Sergei Furgal, who was arrested the day before. Experts of the French Liberation believe that the appearance of a LDPR protege from Moscow in such a responsible position is a big mistake of the Kremlin.


According to the newspaper, Sergei Furgal was initially doomed at the moment of his election. He was chosen by the local people, and thanks to his successful policy, Furgal became more popular in the Khabarovsk Territory than Putin - the latter could not endure the "insult to majesty", which ultimately ended with the arrest of Sergei Furgal.

As a result, thousands of unrest in Khabarovsk and demands to return the disgraced governor to the region. The appointment of a "Varangian" from Moscow, Zhirinovsky's favorite Mikhail Degtyarev, added fuel to the fire. People are outraged that the decision is made for them by the federal center, not paying attention to the opinion of local voters.

Degtyarev does not know the region - he has never been to Khabarovsk. In addition, he is known for his ultra-reactionary politicaleconomic views - so, he was a supporter of the prohibition of the dollar in Russia, called atheists "homosexuals", advocated the introduction of a white-yellow-black banner in the Russian Federation.

After his appointment to a new position, Degtyarev assured that he could win the hearts of people with his availability and openness. However, the beginning of his governorship led to even wider street protests.

Mass demonstrations have found a second wind. Moreover, people demand not only the return of Furgal and the expulsion of Degtyarev away - more and more often there are political statements that are hostile to Vladimir Putin and his policy. All this testifies to the fact that the course of the Russian president with the appointment of Degtyarev is defeated.
- Conclude Liberation analysts.
Ctrl Enter
Noticed oshЫbku Highlight text and press. Ctrl + Enter
We are
Tagesspiegel: In Russia, the whole city no longer believes Putin
French media explained why the protests began in Khabarovsk
Reporterin Yandex News
Read Reporterin Google News
4 comments
Information
Dear reader, to leave comments on the publication, you must sign in.