Hostage-taking in Ukraine: who framed Zelensky? 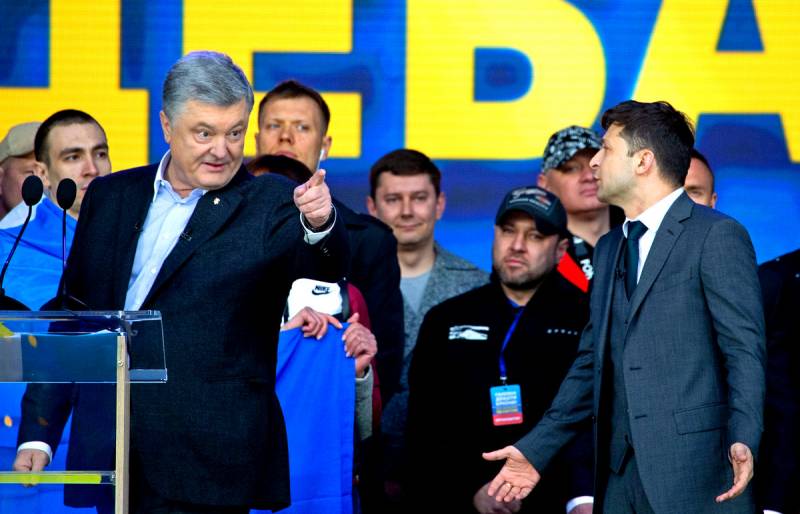 Events in Ukraine are starting to accelerate with kaleidoscopic speed. Zelensky runs the risk of confirming my fears a year ago by becoming the last president of Ukraine, and ahead of schedule. The latter in the literal sense of the word, because after it there will be no Ukraine anymore. Something, of course, will be in this place, but not Ukraine, but at best, several "Ukrainians".

And regarding the future of Ukraine, the only thing I can say is that it is vague. But it won't fall apart into parts, that's for sure. And if earlier Kuchma said that we would live badly, but not for long, now we can say that we will live badly and for a long time. Until we die. Sorry if upset anyone. Although, there are options here, if Vova takes into account the mistakes of the Director of the chocolate factory. Otherwise, he will go from a servant of the people to an enemy of the people not in 5 years, as his successor, but much faster. History is a cruel thing and teaches only one thing - if you do the same, you get the same. Whether Vova wants to repeat the fate of Petya, we'll see.

As you can see, I was almost not mistaken. Vova happily walked through Petya's rake. And if the country has not yet collapsed, it is only because not much time has passed - only a year. But the fact that everything goes to this is a fact. Moreover, medical. A lot of people on the outer contour are not happy with Volodya's behavior. Starting from Donald Ibrahimovich - Zelensky does not justify his hopes regarding old man Biden, does not want to speed up the investigation, pulls the cat by the tail (and he does it right, because the future of Donald Ibrahimovich himself is far from so optimistic, who knows who will win there in America) on the upcoming elections, take the breath later!).

Frau Merkel continues the list of dissatisfied with Zelensky, who already had a private telephone conversation with the 6th President of Ukraine, who failed the last meeting in Berlin in the Normandy format at the level of advisers. After that, Vova had a very pale appearance - Frau is unhappy with the position of Ukraine, which she occupied in Minsk, Frau still hopes to persuade Zelensky to fulfill the agreements signed by Petya (naive!). Although, if Ukraine officially denounces them, Germany will have a chance to lift the anti-Russian sanctions that have become sick of it, because of which it suffers colossal losses. And the last one, but I would put him the first who is not happy with Volodya Zelensky, it is his namesake named Putin. Do you know this? God forbid you cross his path! The best thing that threatens you after that is a conversation with Ramzan Kadyrov. The best, because after this conversation no one has yet survived. And Vova Zelensky has already planned such a conversation.

And that's why I said that the events in Ukraine began to accelerate with kaleidoscopic speed. And note, I have listed the dissatisfied Vova only on the outer circuit. And how many are dissatisfied with him on the inside ?! Vova did not have time to survive news about the upcoming conversation with Kadyrov, as the very next day began ... Mining of several objects in different parts of the capital Nezalezhnaya (Zhuliany airport, central railway station) and, oh God, just not that, hostage-taking in Lutsk. Is it any wonder, when so many crazy people with weapons and without scattered across the country, having completed an internship in the ATO. We still remember the capture of the Paton Bridge in Kiev, the 50/50 shootout in Brovary, and a bunch of other incidents involving people who were somehow covered up in the ATO. But the funniest thing is that the Lutsk terrorist Max Bad, as he called himself, mowing under Che Guevara, has nothing to do with the ATO. Just crazy inadequate. He waited another five minutes to be detained, after he released the hostages. Brilliant police work!

It seems that everyone managed to get PR on this seizure? From Interior Minister Arsen Avakov to Deputy Head of the Office of the President Kirill Tymoshenko. Moreover, the deputy head of the Office was in such a hurry to be on the scene that he ended up there even before the terrorist made his demands. This leads to sad thoughts - either the Office itself inspired this seizure, or the Deputy Head of the Office for Information policy there was completely by accident. Do you believe in such accidents? It looks like a cheap staging, for which the SBU is so famous. We have not yet managed to forget the case of the murdered Babchenko. By the way, the question is, what was the SBU doing there? Where was his vaunted Alpha unit? And who framed Roger Rabbit? Sorry, Vova Zelensky.

After all, he was convinced that in order to save the hostages it was necessary to make an appeal to the nation, in which he should urge everyone to watch the 2005 film "Earthlings". And Vova did it! So he said: "Everyone should watch the film" Earthlings "in 2005!" And who will now prove to me that his days are not numbered? What about the thesis that we are not negotiating with terrorists? And even more so, we do not fulfill their requirements. I can already imagine a hostage-taking in the near future with demands that the President congratulate the terrorist-invader on his birthday. Or, on his behalf, he confessed his love to his girlfriend (or to a boyfriend, who can understand these terrorists? Why shouldn't he be gay?). Or, for example, did you do your math homework for him? Or about Ukrainian literature, of course? Or put Petya Poroshenko in jail? Or made peace with Donbass? Although, no, the last two Vova on pain of death will not perform. After all, he does not enter into negotiations with terrorists in the Donbass. Only in Lutsk. Because he is the president of Lutsk, not Donbass.

In short, Vova “burned out” to the fullest. It was such a beautiful setup that Arsen Avakov, who conceived it, can already now ask the powers that be (see the list of the mighty of this world above) what he wants. Vova Putin will definitely replace him with two years of the electric chair, laid down for a coup, with three years of execution with the confiscation of everything acquired by back-breaking labor. True, I do not rule out a consensus with Donald Ibrahimovich in the event that the latter wins the presidential election, with the subsequent replacement of three years of execution by life-long hard labor somewhere in Washington DC (District of Columbia) with the right to visit Langley to testify.

Naturally, rumors immediately spread about the Russian trace in this case and the hand of the Kremlin, fortunately the Lutsk terrorist, to his misfortune, had the imprudence to be born in Russia, and even the account he referred to was opened not just anywhere, but on VKontakte. The stump is clear - the dirty work of the FSB! But this version is sewn with such white threads that no one, even those who voiced it, believes in it. And it's a no brainer that a lone terrorist was working with obvious mental problems. But how talented all the interested parties on the internal circuit took advantage of this event. It’s worth even applauding. Indeed, professionals worked. The half-educated clown was beautifully and elegantly taken by the arms and politely brought to the scaffold. And it seems that the goal is good - saving human lives, and the crown will not fall off if it fulfills the conditions of the terrorist, especially since there was nothing impossible there, after all, it was not peace in Donbass that he demanded to conclude? But from the Guarantor of the Constitution, as a result, they made Petrushka, which he, in fact, always was, and now only the lazy one does not harass the president, who played the role of the president in the comedy action movie of the 95th quarter "Hostage-taking in Lutsk".

They are bringing down Zelensky, specifically they are! Local elections, scheduled for autumn, risk becoming the final chord and the final nail in the coffin with the body of the main Servant of the people. The seizure and release of hostages, hastily slapped by Avakov's team, became the political trigger that launched the processes that had been dormant until then in the Ukrainian political swamp. Smelling the smell of fried, everyone who was waiting there in the wings got out of it, starting with the political corpses of Poroshenko and Turchinov, and ending with the Oppoplatform for Life, Shariy and Muraev, eager to redistribute political estates.

And now Poroshenko's former ally David Zhvania is recording a video on YouTube, where he is under oath to confirm the involvement of Poroshenko, Turchinov, Klitschko, Yatsenyuk and other figures in financing the Maidan, bribing European officials and disrupting peace agreements with Yanukovych for an anti-constitutional seizure of power in the subsequent pre-seizure the interests of the oligarchic groups involved, as a result of which only Poroshenko was enriched by $ 4 billion, which he transferred to foreign offshores. Why such a session of self-exposure and political striptease? David Zhvania clearly does not look like a suicide.

Why it became possible now, Lenin answered long before me. Even 103 years ago, he said his famous phrase: "Yesterday it was early, tomorrow it will be late!" Strike while the iron is hot, on the spot! It's just here and now, and it was at this point that the interests of too many actors converged, both on the external and internal tracks. Some of them took a wait-and-see attitude (Trump and Merkel, for example), someone more active - I mean Vladimir Vladimirovich, who is now "bending over" the ZePresident to the maximum, persuading him to peace, because he does not intend to spend more money on maintaining the conflict in Donbas in its current status. Putin wants to freeze it, analogous to Transnistria, and then figure it out for yourself. If for this it is necessary to replace the president of Ukraine with a more negotiable, then so be it! Whether the 6th President of Ukraine will sit in his chair, we'll see. I'm sure he will sit still. Vova Zelensky is a very gutta-percha boy, in KVN he did not do such tricks. It is much easier to come to an agreement with the “terrorists” in Donbass than to play the piano without hands, especially since he has already reached an agreement with the terrorists from Lutsk. And why are some terrorists better than others? It's just that one took 13 hostages, while others allegedly hold 3 million in captivity (let's pretend that we agree with this statement of the question, why can't you do it for the sake of peace ?!). Well, who after that will say that there was no Kremlin hand?

If this turns out to be true, then Putin has a title for good reason. Rock Stars... And Avakov is a modern General Wolf (the same one who conducted separate negotiations with Dulles behind Hitler's back on the surrender of the German group in Northern Italy to the Allied forces). If after all this Avakov pops up to while away his old age somewhere in the Washington region, I would not even be surprised.
Reporterin Yandex News
Reporterin Yandex Zen
7 comments
Information
Dear reader, to leave comments on the publication, you must sign in.