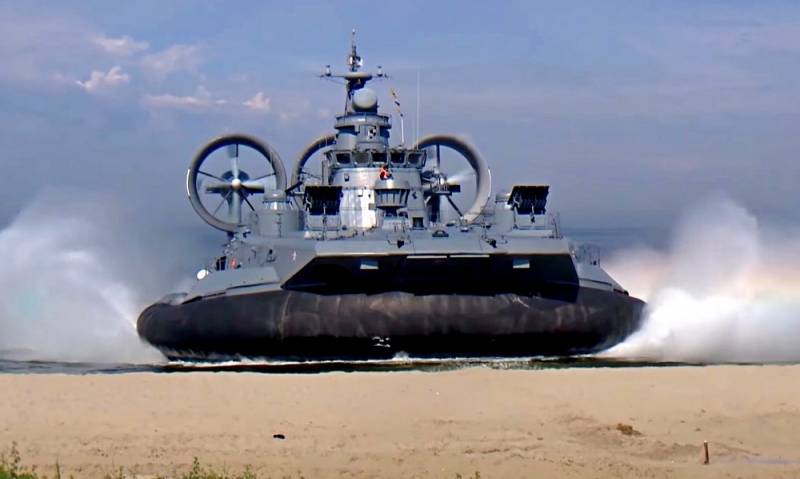 The Russian Defense Ministry has published a video of the military maneuvers of the Baltic Fleet. The footage shows one of two Russian Zubrs landing Marines and a military machinery... An impressive article on this matter was published on the Popular Mechanics website.


The attention of American experts was attracted by the Russian small amphibious assault ship Yevgeny Kocheshkov of project 12322 Zubr. The amphibious ship docks to the shore, BTR-82A leaves from its interior and several dozen servicemen are parachuted. Infantrymen set up 82mm mortars for fire support as armored personnel carriers and infantry move inland.

Evgeny Kocheshkov is one of two Russian hovercraft of the Zubr project. The vehicles, built in 1991 in St. Petersburg, are designed to transport large numbers of marines over short distances. Kocheshkov and its sister ship Mordovia weigh 415 tonnes with normal load, have a crew of 33 and can carry up to 10 BTR-82A or three main battle tanks, or 360 marines. Zubrs can also carry water mines and, if necessary, drop them into the sea.


Ambifia is powered by five gas turbine engines, each of which produces 12100 horsepower. The vessel can cover a distance of about 300 miles, while developing a speed of 55 knots (63 miles per hour).

Unlike American hovercraft, Yevgeny Kocheshkov is armed with two AK-630M Gatling guns with six 30-mm barrels each. There are also two 140-mm missile launchers A-22 "Fire" to suppress the enemy's coastal defense, the American edition writes.
Reporterin Yandex News
Reporterin Yandex Zen
2 comments
Information
Dear reader, to leave comments on the publication, you must sign in.