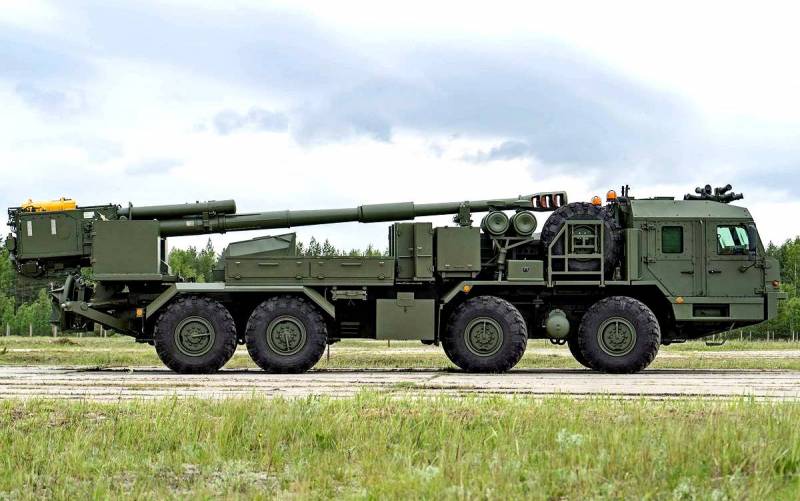 The press service of the Burevestnik Central Research Institute has published photographs of the newest Russian self-propelled artillery unit 2С43 "Malva" on a chassis manufactured by the Bryansk Automobile Plant. The caliber of the gun is 152 mm.


Chassis "Malva" made on the modification of the car BAZ-6910. Its mass is estimated at 21 tons, carrying capacity reaches 19,41 tons. A 470 horsepower engine can accelerate self-propelled guns to 80 km per hour. At the rear of the 2C43 is a heavy stop that descends during firing.

"Self-propelled gun" is equipped with a 9-speed two-position gearbox, independent two-torsion suspension on all axles. Each wheel of the installation is equipped with shock absorbers. "Malva" is also equipped with tires with adjustable air pressure, the range is 1000 km. 2C43 is capable of crossing a ford with a depth of 1,4 m.

The self-propelled guns have an improved version of the 2A88 gun, which is equipped with 2C35 "Coalition-SV".

ACS 2S43 "Malva" should be lighter than similar howitzers on tracked chassis (2S3, 2S19 and 2S35), as well as more mobile than tracked guns or towed SG type "Msta-B". In terms of ballistic properties, "Malva" should approximately correspond to "Coalition-SV". The tactical and technical characteristics of the gun are not yet known exactly.
Reporterin Yandex News
Reporterin Yandex Zen
3 comments
Information
Dear reader, to leave comments on the publication, you must sign in.