Kiev withdraws from the Minsk agreements: Russia still has to make a choice 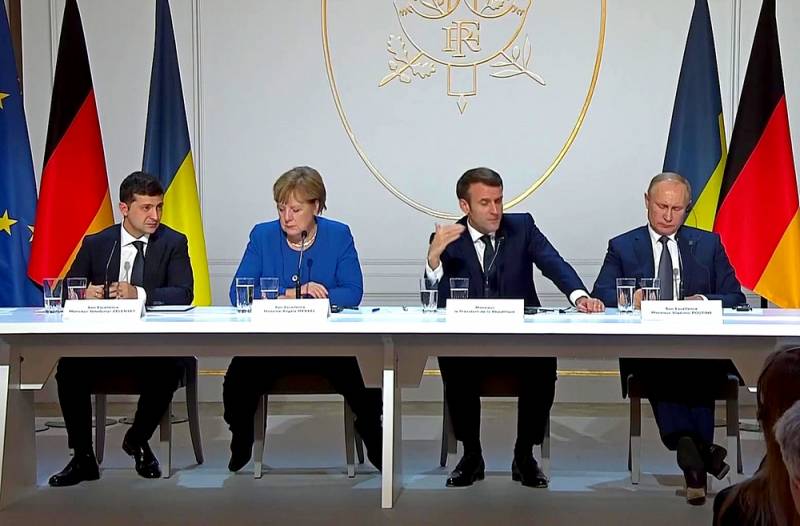 Last week has become a landmark in a long, arduous and, it is worth recognizing the obvious, absolutely hopeless process of a "peaceful settlement in the Donbass", carried out in the framework of the "Minsk Agreements". Official Kiev, in fact, decided to completely denounce these agreements - and this was done not in the form of regular provocative statements by diplomatic representatives of the "nezalezhnoy" or other high-ranking officials there, but at the legislative level.


This, however, was perfectly combined with a number of new Russophobic demarches performed by Ukrainian politicians, right up to the head of state ... What does the non-ambiguous decisions made in Kiev really mean for the residents of Donbass and for Russia?

First of all, in this case, we are talking about the adoption by the Verkhovna Rada of Ukraine on July 15, Resolution No. 3809, concerning the holding of local elections in the “non-railway”. This "holiday of democracy" will take place on October 25 this year - but not in the Republics of Donbass, called in Kiev by the disgusting abbreviation "ORDLO". It would seem that if the Ukrainian side had even the slightest intention to follow its own promises, which were signed in due time in the capital of Belarus and were repeatedly confirmed at the meetings of the leaders of the "Normandy format" - this is a wonderful opportunity to take at least a step towards their implementation. In the corresponding agreements it is written in black and white: first, the introduction of a special status for the Donbass into the Constitution, then the holding of local elections of new authorities there. Only after that it will be possible to talk about the "transfer of the border" and similar things to which Kiev is striving so much.

Nevertheless, the Ukrainian parliamentarians seem to have quite deliberately decided to break these agreements by introducing in their own resolution a clause stating that there will be no elections on the land of Donbass until "Russia fulfills five obligatory conditions." In fact - an ultimatum, extremely arrogant and, moreover, compiled clearly in a hurry and completely illiterate. So, the clause on the withdrawal from the territory not controlled by Kiev of “mercenaries, representatives of illegal armed groups” that he had seen there, and, most importantly, “the Russian occupation forces from all over technique”, For some reason is repeated twice in the text. Obviously, slow-witted people measure everyone by themselves ... We are also talking about "restoring law and order and the constitutional order." Both "order" and "system", of course, mean exclusively Ukrainian.

At the same time, the least delusional (but at the same time, again, completely impracticable) item is “full control over the state border”, which should be transferred to the Ukrainian side. Against this background, even the words about "the temporary impossibility of holding elections in the occupied Crimea" and the demand "to ensure the safety of Ukrainian citizens inhabiting it" do not look so wild. Everything is simple and clear here - this is the diagnosis and its clarification we will leave to the doctors. But any lawyer (especially in the field of international law) will unequivocally say: such quirks, performed by the country's highest legislative body, have a clear and unambiguous definition. This is actually a complete denunciation of the "Minsk Agreements", which are losing their essence, meaning and purpose in the system of coordinates that the parliament is trying to set as "non-existent".

As a matter of fact, nothing unexpected happens. Recently, Kiev has been shouting almost like a cry about the impossibility of fulfilling the Minsk that saved it from the final military defeat in due time, since it does not correspond to the current realities. Such a statement was made ten days ago by the Vice Prime Minister of Ukraine, who is also the second person in the Ukrainian delegation at the Minsk talks, Aleksey Reznikov. At the same time, he carried some kind of, forgive me, nonsense about the allegedly “seized by Russia” from the “uncovered” “thousands of square miles of land” and called on the West to fully contribute to “revising and adapting the Minsk process to new realities”. Well, we will talk about the real reaction of the West to such "attractive" proposals, but for now we will return to Ukraine. The processes taking place there today more than eloquently testify to the intentions of its current leaders and their true masters.

The very next day after the Verkhovna Rada of Ukraine was marked by the above-mentioned "historical" normative act, a solemn meeting was held there, dedicated to some anniversary of another "epoch-making" event - the adoption of the Declaration of State Sovereignty. Speaking at this meeting, President Vladimir Zelensky said from the rostrum literally the following: "For the sixth year in a row, we are defending our sovereignty from Russian aggression and paying a high price for this - the lives of our citizens ..." In fact, the comedian who climbed into the presidency for the first time in his "Board" openly and publicly called our country "aggressor". Thus, he finally crossed the "red line", or rather, put a fat cross on the seemingly naive aspirations of someone to see him as the "president of the world" who would end the fratricidal war in the east of the country and begin to at least make attempts to normalize relations with Russia. Such hopes were not initially worth a damn, but were fueled in the eyes of especially stubborn optimists by a certain amount of a decrease in the degree of Russophobia in the statements and deeds of the new leader. Well, the period of illusions is over.

In particular, this is evidenced by a sharp revival of the activities of the hounds from the Security Service of Ukraine, after the elections, somewhat calmed down their ardor (what if there really is a "change of course" coming?), But literally recently, with tripled energy, they began to "catch" in massive quantities " separatists ”,“ DPR spies ”and“ pro-Russian Internet agitators ”. The cunning guys clearly understood: the course remains the same - to confrontation with Russia and the power capture of Donbass. Apparently, they were not mistaken in this ...

It was clear for a long time that the inglorious end to the "Minsk agreements" was not prepared for Poroshenko, who was forced to sign and hated them with all his heart, but for the "peaceful" Zelensky. The mere appointment of Reznikov as “Deputy Prime Minister for Donbass”, who, just a month ago in London, broadcast that his main task was “to create a special model of justice” in the “deoccupied territories”, which is necessary in order to bring to justice. as he put it, “miners on tanks,” is more eloquent than a thousand words. Looking at this gentleman, even outwardly looking devilishly like Heinrich Himmler, at his words about the "special model" immediately recalls the courts-martial and "special troikas".

By the way, Reznikov has also repeatedly spoken about the complete unacceptability for Kiev of the idea of ​​a "special status" of Donbass in any form (and not what is enshrined in the constitution). The rhetoric of the head of the Foreign Ministry of the "non-existent" Volodymyr Kuleba sounds approximately in the same way, declaring that Kiev is absolutely not obliged to fulfill any "Minsk agreements" there. The real masters of their word: they wanted - they gave, they wanted - they took back. It is quite obvious that Ukraine will no longer adhere to these agreements, even in words. And not at all because, as some have argued, "their implementation will become the political collapse of today's Ukraine." What are you, gentlemen? That which is dead cannot die ... The final collapse of the “nezalezhnoy” is just a matter of time, with or without Donbass. There can be no place for any "Minsk" in its policy, first of all, because even these extremely contradictory, half-hearted and, frankly, initially impracticable points for several years kept the situation on the very brink of a large-scale armed confrontation, did not give a smoldering local conflict flare up to a big war.

It is necessary to decide until they decided for us

Today, those who have decided to play the “Ukrainian party” to the end do not like this sluggish development of events. It is clear that we are talking about the true rulers of Ukraine, located on the other side of the ocean and exercising their will through the US Embassy in Kiev. Immediately after the adoption of the Verkhovna Rada's resolution that outlawed the main provisions of the Minsk Agreements, a very revealing telephone conversation took place between Russian President Vladimir Putin and German Chancellor Angela Merkel. In its course, the leaders of both states called the position taken recently by Kiev "counterproductive" and "leading to a dead end in the negotiation process." At the same time, ritual statements were made again about “there is no alternative to the Minsk agreements,” in which, I am sure, neither the president nor the chancellor believe a dime. Can Berlin force Ukraine to “slow down” and at least outwardly demonstrate “commitment to the peace process”? In theory, there is a chance.

For this, the "non-leveraged" must take concrete measures: all channels of financial and other aid that feed it must be strictly and immediately blocked, any cooperation with it is suspended, and the EU border must be tightly closed both for official representatives of Ukraine and for all its citizens. The question is that neither Germany nor the EU as a whole is likely to dare to do this. Not only will they look extremely stupid at the same time - after their own long-term support of the “Euromaidan” and the power generated by it. Such a turn will be perceived as an extremely unfriendly demarche by Washington, with which Berlin today and so-called “on knives”.

Will there be a serious new round of exacerbation there? Very unlikely. Rather, they would prefer to continue playing meaningless "Norman" games, thereby strengthening Kiev’s confidence in its own impunity. But Moscow is unlikely to be able to adhere to such a policy. Let us consider in the most primitive approximation the possible options for further actions of the Kremlin. The real ones are three scenarios. Agree to "revise" the already not very winning "Minsk Agreements"? This will mean the complete surrender of Donbass and its inhabitants and, accordingly, the final collapse of all Russia's foreign policy ambitions in the "post-Soviet space", where right now we have an aggravation in the Belarusian and Armenian directions. Then continue to make “formidable” statements and issue “last warnings”, while looking more and more ridiculous and ridiculous?

Well, Sergei Lavrov said that the militant chatter of the Ukrainian authorities was "from the evil one" and repeated the mantra about "the need for strict implementation of agreements" ... Well, Dmitry Kozak demanded from Kiev to "refute" Reznik's statements about the "non-obligation of Minsk" ... Ukraine to someone from this? Is it cold? Yes, these words, which look more and more empty, are nothing to them. Nobody even thought to refute or disavow anything. And he won’t think. The only line worthy of our country is to prepare for the recognition of the Donetsk and Lugansk republics at least at the level of South Ossetia. Yes, with all the ensuing consequences. Otherwise, most likely, in the Kremlin in a matter of hours or even minutes, it will be necessary to make a decision on the introduction of regular troops to this territory to save hundreds of thousands of Donbass residents from destruction during the punitive operation launched by Kiev and engaging in direct armed clashes with Ukrainian troops. And it’s good if only with them, and not with the “suddenly” NATO “peacekeepers” who appeared there. The logic of the development of the situation suggests that everything can come exactly to this.
Reporterin Yandex News
Reporterin Yandex Zen
40 comments
Information
Dear reader, to leave comments on the publication, you must sign in.