Pentagon weapons contract: US is going to “beat Russia with its own weapons” 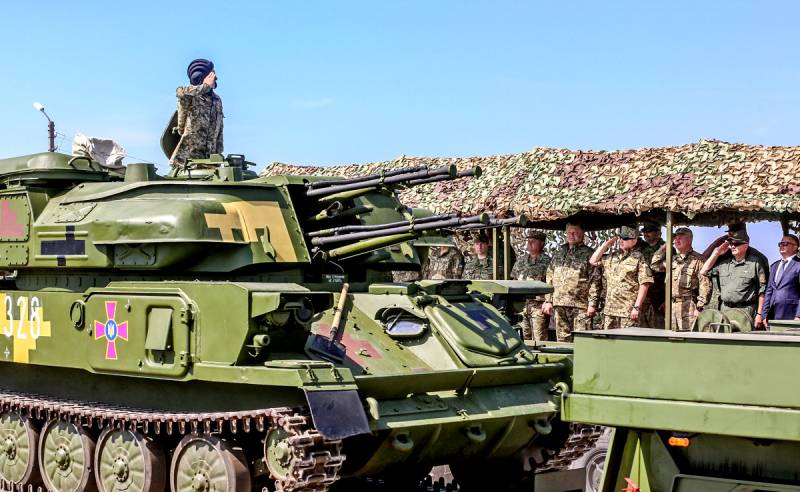 The Pentagon recently announced a rather unusual tender: the United States military is determined to find manufacturers and suppliers in order to acquire, as stated in the relevant official documents published on its website, “weapons and ammunition produced in the Soviet Union and the Warsaw Pact countries to him".


This is not about a single purchase at all, and far from such a classic of the Russian military-industrial complex as, say, a Kalashnikov assault rifle. At stake is a long-term contract covering a huge list of military products. To whom and for what specifically could this be needed in the USA? Let's try to understand the nuances.

First of all, it should be remembered that this is far from the first attempt by Americans to simply begin to "rivet" in their own not developed, tested and perfected models of Soviet and Russian weapons. I recall that about three years ago the command of the Special Operations Forces of the US Army was vigorously searching for such a thing as a “domestic manufacturer” who could arrange the release of a number of our most popular and demanded machine guns - from heavy to light. At the same time, the "fathers-commanders" from the MTR unanimously claimed that they did not have the idea of ​​re-equipping subordinates with Soviet machine guns - but they were desperately needed by some "American allies", it is completely unclear which people live in which particular part of the world. The scandal, I remember, came out a noble.

First of all, this dashing idea, as expected, did not find the slightest understanding in the Russian Kalashnikov concern. The impetuous children from the USA were immediately reminded of their heart-rending cries of the "sanctity and inviolability" of intellectual property with which they are worn as with the notorious written shell. And also that all technical developments of both Soviet and Russian gunsmiths are reliably protected by relevant copyright documents. And for some reason, no one recalls that representatives of American industry acquire the appropriate licenses for the production of the very same types of weapons that the local “specialists” have already set out to supply someone there. In addition, instantly a strong suspicion arose that these same “someone” - if not ISIS terrorists, then at least the militants of the Syrian “opposition”, supported by the United States. The topic was somehow quietly removed from the agenda, “stalling” as if by itself ...

We will definitely return to the question of the "friends" and "allies" of the United States, who need Soviet weapons and ammunition for it. In the meantime, we’ll take a closer look at the issue of what specific things the Pentagon representatives intend to put on stream this time. In this case, the appetite is much greater - it can be said that we are talking about a program of a completely different scale and order! So, in addition to the good old RPGs and Kalash (without them!), As well as their ammunition, the Pentagon suddenly needed anti-tank guided missiles (certainly Soviet-made), and in addition, "other missiles - both land-based, and air. " Moreover, the US military is looking for someone who can supply them with the widest range of artillery shells and mortar mines.

And this is not only about ammunition for guns and howitzers in the range from 60 to 152 millimeters. Ammunition for tank guns of 125 mm and shells for 23 mm and 30 mm automatic guns are also in demand. The contract for the release and delivery of all this deadly variety, “both to the territory of the United States itself and to the addresses of the Pentagon’s foreign military bases”, which will be indicated additionally, is planned to be concluded for a start from 2022 to 2026. And then - how it goes. Potential counteragents are initially warned that the entire spectrum of the requested weapons and ammunition will go through the most vigilant and harshest "state acceptance" carried out by representatives of the US Army to avoid trying to slip something worthless. In a word, everything is stipulated and stipulated. Except for one "tidy" question: who exactly and why are the Americans going to "make happy" with a kind of breakthrough of "Soviet" weapons ?!

Incidentally, there is another very intriguing point in this matter. Pentagon officials who prepared the proposal and the documents accompanying it admit with absolutely amazing frankness that they have been engaged in the supply of weapons of Soviet and Russian models a long time ago. Yes, here's the trouble - now a lot of problems have arisen with this. “Some European countries”, suddenly beginning to show disobedience before Washington, refuse to become transit countries for such goods of dubious origin and even more dubious destinations. Moreover, hitherto operating “sources of supply” suddenly dried up or became “toxic”. In the second case, we are talking about countries "which may soon be subject to US sanctions." Some military experts believe that in this case we are talking primarily about China. It has been this country that has long been one of the world's leading manufacturers of just the kind of weapon on which the “made in the USSR” stamp should rightfully stand. And as for the supply of such weapons paid by the Americans ...

In this regard, we can recall at least how incredible the number of products of the military-industrial complex of the Middle Kingdom was at one time in the hands of Afghan dushmans. What part of the cargo of this kind was generously paid for from the US CIA's secret funds, one can only guess. Definitely, for a rather considerable one. Nevertheless, today China has become almost Washington’s most archenemy and it’s completely impossible to buy anything from the US military there. And they won’t sell it, perhaps. As for the "other sources", which seem to be "exhausted", then there is generally a different story.

The theme of the "huge" arsenals of Soviet weapons that had once belonged to magic, which once belonged to the countries belonging to the Internal Affairs Directorate, as well as to the former republics of the USSR, and the disappearance of hundreds of thousands, if not millions of storage units, from the local army depots has repeatedly become the subject of numerous scandals and investigations. But these investigations just ended, as a rule, very deplorably - for those who initiated and conducted them. However, there are still some figures that can be operated with a high degree of confidence. I will give just a few very specific examples. So, today the complete mystery remains the location of about 1200 T-72 tanks, which at one time belonged to the armies of Hungary, Poland, Czechoslovakia, as well as the German Democratic Republic. A similar situation with a thousand BMP-1, who had the same owners. Dozens of Osa and MANPADS Strela-10 MANPADS, which were armed with Poles, Czechs, Bulgarians and Germans, disappeared into complete obscurity. Moreover, a hundred ZSU-23-4 “Shilka”, again, once very popular with the military countries of the Warsaw Pact, also “disappeared”.

The list, you understand, is far from complete, covering only the countries of Eastern Europe, without the so-called "post-Soviet space". Also, for obvious reasons, it does not include portable small arms - it is generally impossible to find even the most approximate number of “trunks” that have disappeared without a trace. Nevertheless, based on the above list, it becomes clear why the American military suddenly needed a real mountain of ammunition of very specific calibers. I must say that in the opinion of serious experts and researchers, Soviet weapons "spread" around the world, and, above all, its "hot spots" so wide that it is perhaps easier to name countries where they are not than to list those states where they are periodically revealed and asserts itself in wars and local conflicts.

However, far from all of its samples are in service with both legal and illegal formations from North to South Africa and from the Middle East to Latin America, or have already been destroyed during the fighting. There is every reason to believe that a fairly serious number of weapons and equipment, who at one time or other left the military base and arsenals of both the ATS countries and the former Soviet republics, simply migrated to other depots - secret ones. Yes, the vast majority of them, to put it mildly, do not shine with novelty, and some of them are completely “ushatany” to an extreme degree of wear. Hence the need to establish production, obviously according to the samples at the disposal of the customer. Why do this at all? Not so long ago, the American Forbes magazine, which raised this topic without any sentiment or reflection, recalled that the изд alien ’weapons had long been used by scouts, saboteurs, and other aces of the secret war для so that the denial of conducting secret operations looked as plausible as possible’. Well, thanks for the frankness ... Nevertheless, are the Pentagon’s requests too big in order to try to explain them only with plans to conduct certain hidden subversive actions against Russia? Missiles and tank shells in this case, why? “Knights of the cloak and dagger” on tanks travel, as a rule, only in Hollywood action movies of the worst quality. They have other methods and different weapons.

The American journalists themselves finally come to the conclusion that the weapons of the Soviet and Russian models, which the Pentagon urgently and massively needed urgently, are nevertheless intended, rather, for the "US allies." And if this idea is true (and there is no other explanation here, anyway), then such intentions can only mean one thing: the United States intends to open not only one, but many “fronts” against our country, acting, as usual, with its own forces hirelings. Where will it be - in Syria, another point in the Middle East or some of the post-Soviet countries? Washington clearly intends to use its own Afghan or, more likely, more recent, Chechen experience and try to draw our country into a long and bloody confrontation with any "freedom fighters" generously armed by the United States. If someone has a clear and logical version of a different kind - you are welcome to express my favor. However, it is unlikely that it can exist, unless it involves some completely fantastic assumptions. Everything indicates that, well aware of the mortal danger of a direct military confrontation with Russia, the United States still intends to try to beat her - but with the wrong hands and her own weapons.
Ctrl Enter
Noticed oshЫbku Highlight text and press. Ctrl + Enter
We are
Putin's phenomenon is Russia's main problem
Ten "defeats" of Putin
Reporterin Yandex News
Read Reporterin Google News
9 comments
Information
Dear reader, to leave comments on the publication, you must sign in.